There are 7 options to discuss, so the landscape is more complicated than ever

An anti-government protester speaks to the crowds at the Democracy Monument on Nov 8. (Photo by Wichan Charoenkiatpakul)

Parliament returns on Tuesday for a two-day session and will decide the fate of seven charter amendment drafts after weeks of limbo.

Six proposals were submitted separately by the coalition government and opposition camp MPs, then debated extensively by MPs and senators in late September.

However, the vote was postponed due to a proposal by a group of senators and government MPs to form a panel to study the drafts.

The seventh draft, proposed by civil group Internet Law Reform Dialogue (iLaw) and initially supported by 100,000 people, will get its fair share of the debate tomorrow and Wednesday now that it has cleared the verification process.

Three of the seven drafts, including iLaw's version, primarily seek changes to Section 256 of the constitution to pave the way for the setting up of a charter drafting assembly. 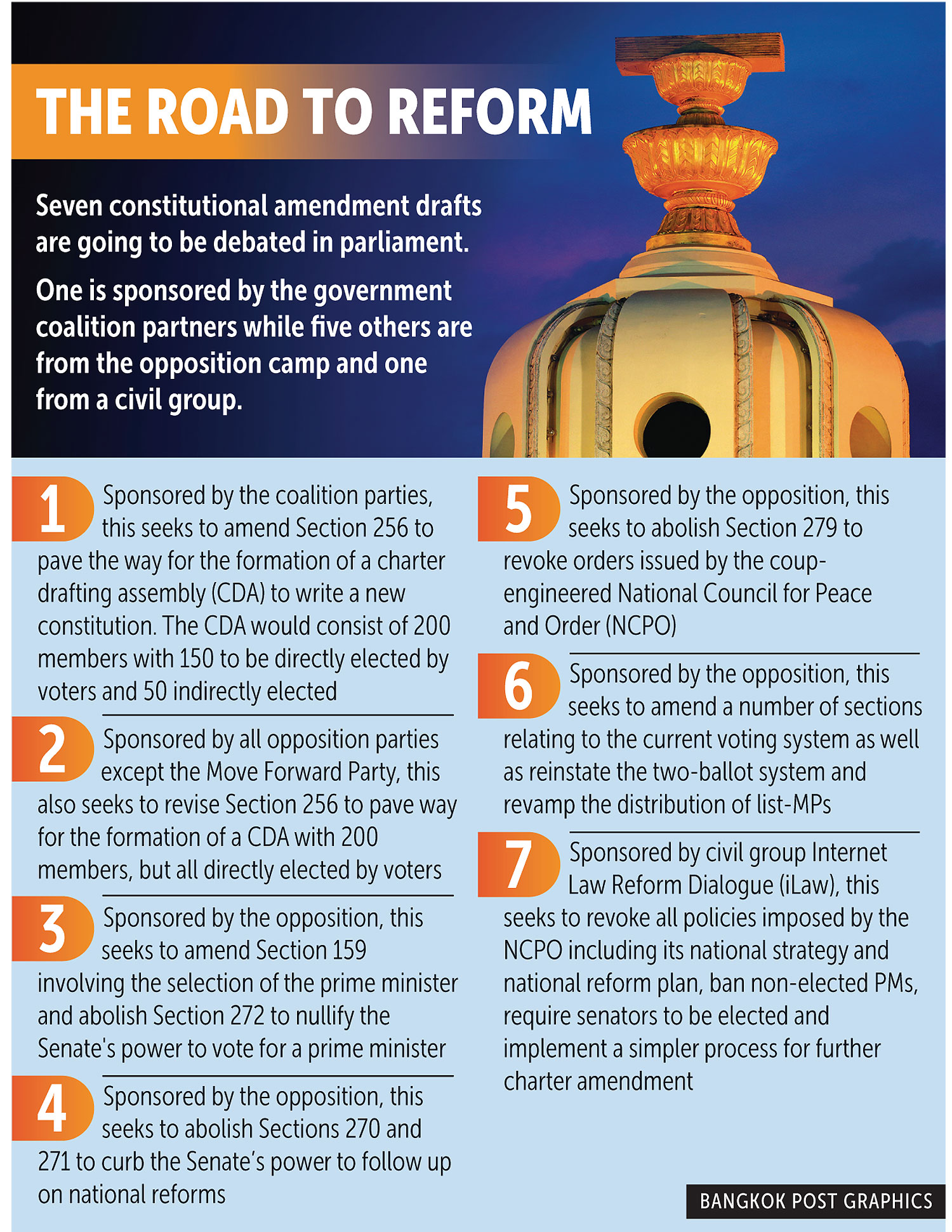 The remaining two drafts don't touch section 256 but aim to amend the charter section by section.

The coalition government's CDA comprises 200 members: 150 elected across the country, 20 picked by parliament, 10 public law experts, 10 political experts and 10 representatives from student groups. The election process must be completed in 90 days and the drafting process finished in 240 days.

The draft must be submitted to parliament for a vote and if it is rejected, it will be put up for a referendum within 60 days. A new CDA would then be selected to finish the task if the draft is rejected at the referendum.

The opposition's draft calls for a 200-member drafting panel whose members are directly elected by voters across the country and the election process must be finished in 60 days. Under this proposal, a 45-member charter drafting panel will be formed to finish its work within 120 days of being set up.

That draft does not require a parliament endorsement and will go straight to a referendum to be held within 60 days. Similar to the government's proposal, the whole process would start anew if the draft is rejected at the referendum.

The iLaw proposal demands the formation of a 200-member CDA to complete the charter drafting process within 360 days. The whole country is considered a single constituency, with each voter choosing one CDA member. The 200 people with the highest votes make it to the CDA.

Other key components in the iLaw proposal include a requirement that the prime minister must be an MP and senators elected directly using the country as a single constituency. That proposal is also aimed at removing all mechanisms placed by the now-defunct National Council for Peace and Order (NCPO).

It includes abolishing seven organic laws governing public independent agencies, the scrapping of the 20-year strategic plan and the reform blueprint initiated by the regime, and reducing the role of the military-appointed senate.

Some of iLaw's proposal targeting removal of the regime's remnants can be seen in the remaining four charter amendment drafts which were proposed by the opposition.

These four documents seek to amend provisions associated with the senate, the NCPO's orders and announcements, and the voting system aimed to switch back to the use of two separate ballots for constituency and party-list MPs.

The fate of the seven charter proposals, however, is said to be hanging on a report on the amendment drafts prepared by the study committee chaired by chief government whip and Palang Pracharath Party (PPRP) MP Wirach Ratana­sate.

The Wirach panel reportedly agreed that two drafts which propose the setting up of the CDA are not in breach of the charter but was split over the legality of the four other drafts. They concern the power and the role of the junta-appointed senate, the election system and the orders of the now-defunct National Council for Peace and Order (NCPO).

Chaiwut Thanakhamanusorn, a PPRP list-MP and secretary to Mr Wirat, said it was likely the government-sponsored draft would pass the first reading thanks to support from senators.

A charter amendment bill needs the support of at least one-third of the 250 senators or 84 to get through the first reading.

Mr Chaiwut said that while the opposition-backed draft had a 50-50 chance, the iLaw version was unlikely to be approved because it contained controversial issues such as abolishing the seven organic laws. "I don't think it will make much difference if the opposition's draft is shot down but the government's draft is passed. Both drafts are similar and based on the same principle," he said.

Chief opposition whip and Pheu Thai MP Sutin Klungsang said much of the upcoming deliberation was likely to focus on iLaw's draft because the others were widely discussed in the September parliament session.

He said all opposition parties would have to determine if iLaw's draft was based on the same principles. The four other drafts are unlikely to pass the first reading due to strong objection from the government MPs.

He argued that if the government's proposal on the CDA were to be accepted, the opposition's should as well. "I think there would be a lot to explain if our draft is rejected while the government's is adopted for further examination."

Tida Tawornseth, an adviser to the red-shirt United Front of Democracy against Dictatorship (UDD), said all the charter drafts should be passed to maximise the chances of resolving the impasse.

Wanwichit Boonprong, a political scientist at Rangsit University, said the government's draft was likely to be passed but it remained to be seen how that would affect the current climate.