Prime Minister Prayut Chan-o-cha on Monday rebutted speculation that there could be another military coup or the enforcement of martial law to quell the current spate of anti-government protests ahead of a planned mass event in front of the Crown Property Bureau on Wednesday. 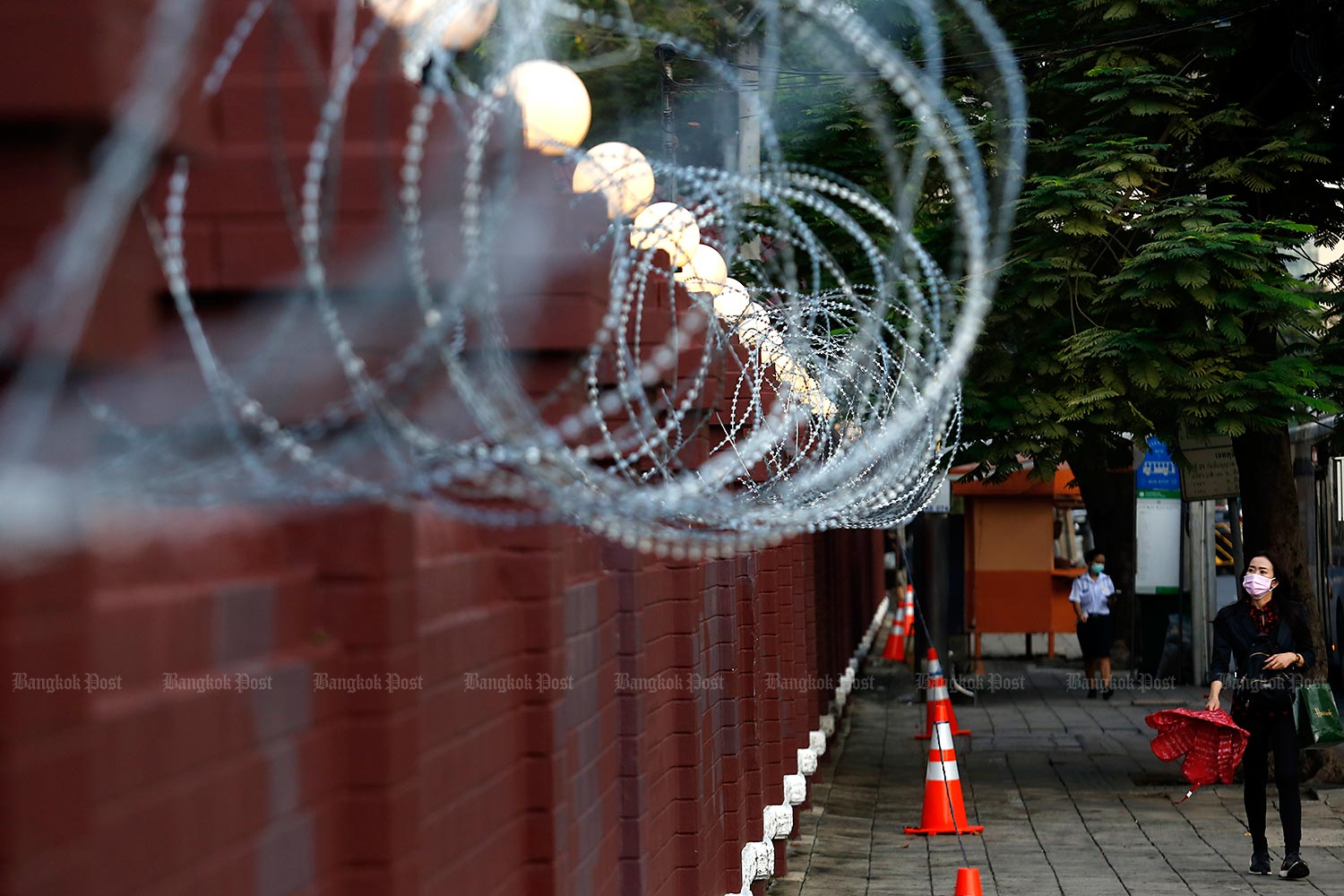 Razor wire is installed on the walls of the Crown Property Bureau on Phitsanulok Road as part of stepped-up security ahead of a planned protest by pro-democracy demonstrators tomorrow. (Photo by Arnun Chonmahatrakool)

After the government met to prepare for the Ratsadon group's demonstration, the premier said the government was trying to prevent confrontations between opposing protest groups and pledged equal enforcement the law againt both sides.

Gen Prayut said the government would not discriminate against anyone and called on the protesters to be considerate of the officers whose job it is to maintain order.

He also stressed that martial law would not be introduced to prevent this or future rallies and dismissed the idea that there might be another coup d'état with the same goal in mind.

As the prime minister, he said did not want to see Thais kill and use violence against one another and told the media to ask the anti-government protest leaders why they have to go to the Crown Property Bureau.

Last Thursday, Gen Prayut declared that "all laws and all articles" would be enforced against protesters who broke the law.

Gen Prayut also brushed aside a claim made on Facebook by protest leader Arnon Nampa that he might resign before Wednesday's rally.

Deputy commissioner of the Metropolitan Police Bureau (MPB) Pol Maj Gen Piya Tawichai said on Monday nine companies of police officers and another company of crowd control officers will be deployed to provide security during the demonstration.

Police had yet to decide whether to designate a protest ban within a 150metre radius of the bureau and close nearby roads to traffic, the official said.

Barbed-wire barriers have been set up around the bureau and signs that read "palace area" have been put up in front and on the side of the place.

Saint Gabriel's College which is l ocated near t he bureau has announced that it will close on Wednesday due to the demonstration.

Chulalongkorn University warned its students and staff to be careful while travelling to the university due to incidents that might cause inconvenience and affect their safety this week although it did not elaborate further.

MPB commissioner Pol Lt Gen Phukphong Phongpetra said police had so far investigated 107 cases related to the protests — 24 of which have been sent to public prosecutors. The rest remain live as officers take statements and gather further evidence, he added.

Meanwhile, Pol Lt Gen Jaruwat Waisaya, an assistant to the national police chief, called a meeting to discuss all the cases brought about by the protests in Bangkok in order to consider laying more charges against the movement's leaders in line with

Section 112 of the criminal code, better known as the lèse majesté law.

The pro-monarchy Phalang Phaen Din Siam group, led by Bancha Panniwat and Sumet Trakulwunnu, issued a statement announcing their own plans to stage retaliatory events on Tuesday and Wednesday near the Education Ministry to disrupt the anti-government rally at the nearby Crown Property Bureau.

If the People's Movement protesters want to go to the bureau, they must wade through the Phalang Phaen Din Siam group, whose leaders have said they will no longer allow any disrespectful behaviour towards the monarchy.

Mr Bancha said his group would demonstrate near the bureau beside the Education Ministry from 3pm on Tuesday, insisting that they were not looking for a confrontation of any kind.

He also called on supporters show up at the same spot at 8am on Wednesday.

"They can rally anywhere but not here," Mr Bancha said.

He also said that many other royalist groups would be joining the Phalang Phaen Din Siam demonstration but vowed that violence would not be used against members of the People's Movement.