Prime Minister Prayut Chan-o-cha survived a no-confidence vote in parliament on Saturday after a four-day debate in which the opposition criticised his government for its handling of the Covid-19 outbreak, the economy and alleged corruption. 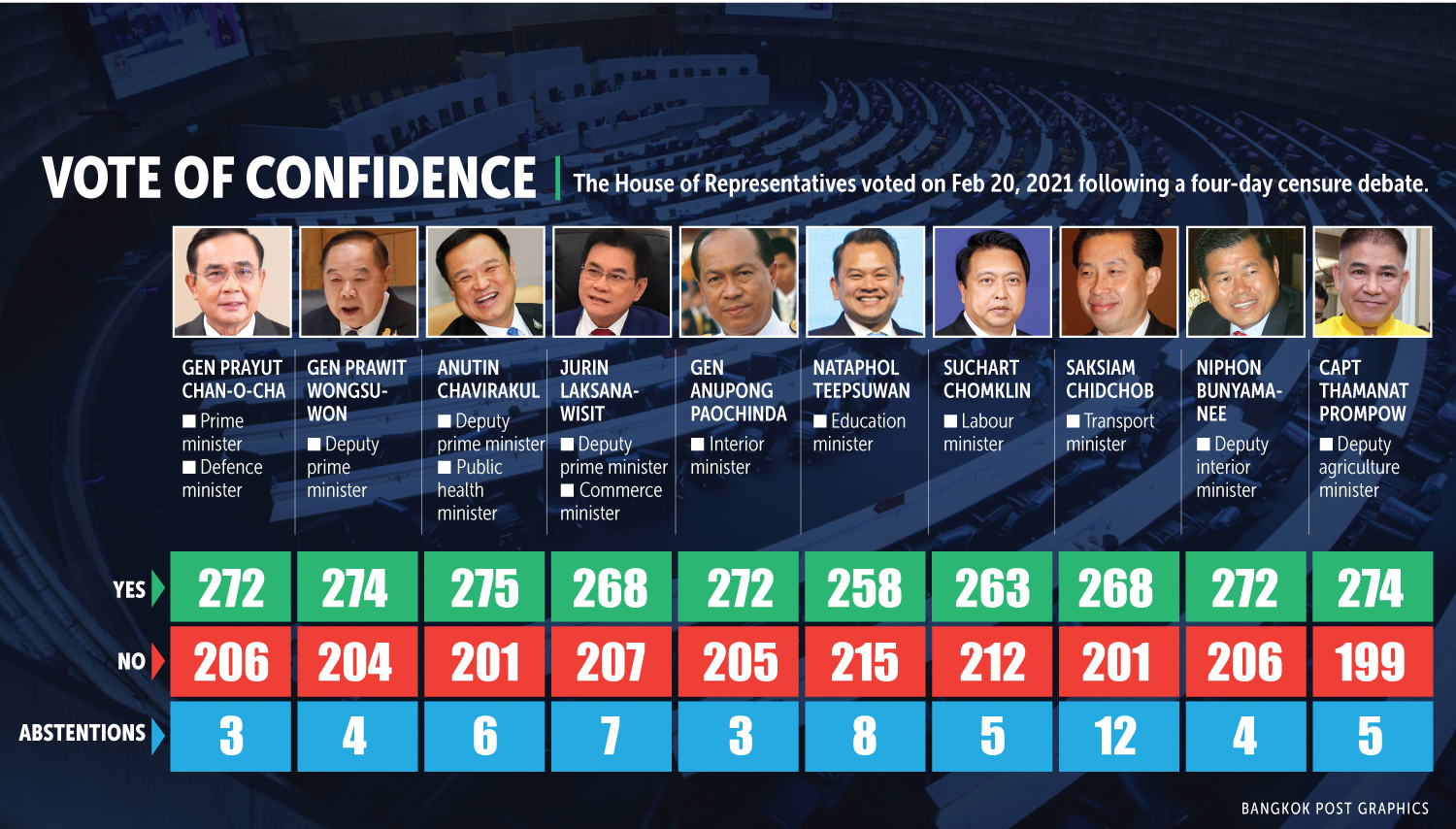 The no-confidence motion against the premier was rejected by 272 lawmakers, while 206 supported it, according to a televised broadcast of the proceedings in parliament on Saturday.

Prawit Wongsuwon, leader of the Palang Pracharath Party, on Friday ordered members to close ranks and support all ministers equally.

Gen Prawit was attempting to quell a mini-rebellion by some members who were thinking about withholding support for Education Minister Nataphol Teepsuwan, whose wife is planning to run for the Bangkok governorship, to the disapproval of some in the party.

"Although they all survived the votes, some of the ministers received fewer votes than others, and that points to a reshuffle in the next few months," said Punchada Sirivunnabood, a political analyst and an associate professor at Mahidol University.

However, the government’s win suggests the ruling coalition would last its full term, she added.

The defeat of the second no-confidence vote since the 2019 elections will allow coup leader-turned-premier Prayut to continue his government’s efforts in limiting the impact of a second wave of Covid-19 infections that is threatening to derail a nascent economic recovery.

At the same time, pro-democracy groups are likely to intensify their street campaign for the premier’s resignation, a rewriting of the constitution and reform of the monarchy

The Ratsadon group of activists began gathering on Saturday afternoon in Bangkok, saying they planned to “step up" their activities.

Police on Saturday morning set up a long barricade of double-stacked containers and spooled out copious amounts of razor wire near the Grand Palace, even though the demonstrators had said they had no intention to gather anywhere near there.

During the four-day debate ahead of the votes, opposition lawmakers slammed Gen Prayut and some of his ministers for their alleged inept handling of the budget allocation and economic measures to deal with the impact of the Covid outbreak as well as a delayed vaccination rollout. The government rejected those charges and defended its policies and strategy.

A total of 487 of the 500 MPs were present for Saturday’s vote. The results were:

The government on Tuesday recorded 965 new cases of the novel coronavirus -- all but nine of them locally transmitted -- bringing the accumulated total since the start of the pandemic to 34,575.