A billboard promoting Democrat candidate Pongsing Senpong is seen on a roadside in Nakhon Si Thammarat. (Photo by Nujaree Raekrun)

The Democrat Party is fending off a challenge from its own coalition partner, Palang Pracharath, in a by-election that will be held on Sunday in Nakhon Si Thammarat.

The by-election in Constituency 3 will not alter the political landscape  as the coalition led by Palang Pracharath has a comfortable majority in the House. However, it has attracted national attention after the Democrats, led by sacked MP Thepthai Senpong, attacked Palang Pracharath  for lacking “political etiquette” by fielding a candidate in the traditional Democrat stronghold.

“When the core party of the coalition government does not have political etiquette, it will come down to voters to decide,” Mr Thethai said in a Facebook post on Feb 13.

Rong Boonsuaykwan, a Palang Pracharath MP for Nakhon Si Thammarat, countered that the contest an expression of democratic principles as party supporters wanted to see a candidate compete for the seat.

The by-election in Constituency 3 covering Phra Phom, Chalerm Prakiat, Cha-uat and Chulabhorn districts was called after Mr Thepthai was stripped of his MP status by the Constitutional Court on Jan 27 due to fraud in the 2014 election of the provincial administration organisation chief.

The spotlight on Sunday will be on Pongsin Senpong, the younger brother of Mr Thepthai, as he seeks to defend the seat against Ayasit Srisuwan of Palang Pracharath. 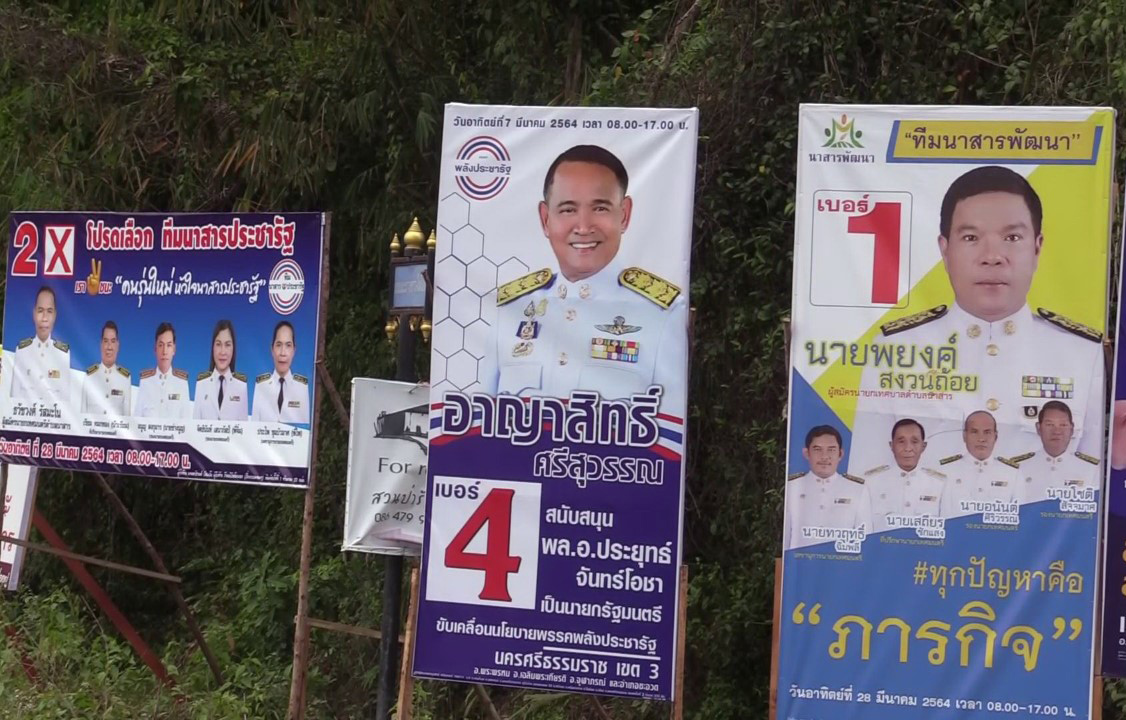 The Democrat contender will be challenged by Palang Pracharat rival Ayasit Sriwuan, seen on the middle billboard. (Photo by Nujaree Raekrun)

Bigwigs of the two parties — Democrat leader Jurin Laksanawisit and Palang Pracharath strongman Prawit Wongsuwon — were in the southern province for the final stretch of campaigning on Friday.

“The Democrats are the party for Nakhon Si Thammarat people because you helped us build the party,” Mr Jurin said in a campaign stop in Chalerm Phrakiat on Thursday.

On Friday in Cha-uat, he said would carry his new candidate to Parliament on Sunday.

The key message from Mr Ayasit on his billoards is that if voters support Prime Minister Prayut Chan-o-cha and his policies, they should switch from the Democrats to his party this time.

Gen Prawit said in the southern province on Friday that he was confident of victory. “If we did not have confidence, we would not have fielded a candidate,” he told reporters.