Looking for change: Anti-government protesters occupy a section of Ratchadaphisek Road during a rally led by Redem outside of the Criminal Court. Some of them hold placards calling for the abolition of Section 112, also known as the lese majeste law, while others demand the release of protest leaders.

Some 20 to 40 protesters including Piyarat "Toto" Chongthep, leader of the pro-government group We Volunteer (WeVo), were arrested yesterday. Three police were injured, according to a police source.

Groups of demonstrators from Redem, the People Go Network, Archeewa Mai Ao Phadet Kan (Vocational Students Against Dictatorship) and Naew Ruam Daeng Kao Na (United Front of Progressive Red) turned out in the afternoon at their rendevous points for a march to their destinations.

Of the four groups, the Redem-led activity was closely monitored by police.

The Redem group had clashed with riot police and anti-government protesters in front of the 1st Infantry Regiment barracks, King's Guard and outside Din Daeng and Suthisarn police stations last Sunday.

Police had used rubber bullets for the first time as well as tear gas and a water cannon with dozens of police and protesters injured following the clash.

Redem protesters converged yesterday at Lat Phrao intersection and marched to the Criminal Court on Ratchadaphisek Road where they planned to dump garbage.

Razor wire was erected at the court compound and large nets were installed to block any objects which they threw into the compound.

Gathering about 5pm and marching since 6pm, the group arrived outside the court shortly before 7pm.

They later set fire to the rubbish they dumped under the picture of His Majesty the King, before a group of the protesters extinguished the fire.

Some climbed up the base of the picture to attach a mock-up court warrant which says they had the rights to assembly. 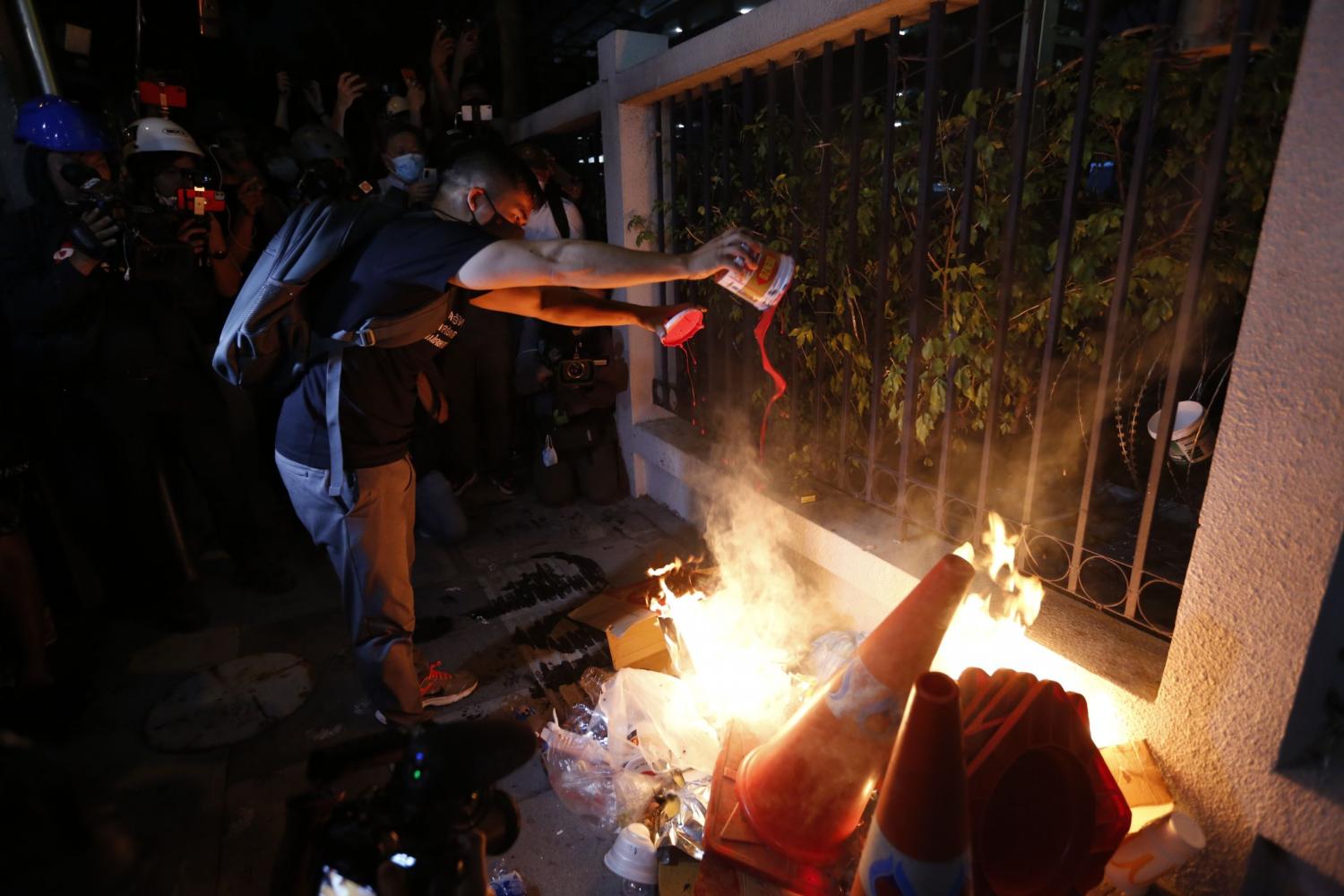 Incendiary sentiment: Anti-government protesters set a fire outside the Criminal Court on Ratchadaphisek Road despite police warnings that their activities were breaking the law.

They say they rallied peacefully but were faced with rubber bullets, tear gas and blasts from a water cannon. Plainclothes police took down the mock-up warrant.

On the other side of the road, protesters broke open two police trucks releasing protesters detained inside.

Fourteen of those protesters walked with their lawyer to turn themselves in at Phahon Yothin police station. It is unclear what charges they face.

Three police were injured, according to another source.

Razor wire barriers were erected as reinforcement and water cannons put on stand by at the 11th Infantry Regiment. Stacks of shipping containers were also set up as barriers.

However, the group changed the destination, saying they would head toward an office and home of Palang Pracharath Party MP Sira Jenjaka on Chaeng Watthana Road instead.

They gathered outside Government Complex on Cheang Watthana Road and their leaders delivered speeches criticising the government before dispersing around 9pm.

The People Go Network, led by activist Jatupat "Pai Dao Din" Boonpattararaksa, began the march from Pathum Thani at 9am.