A pro-democracy activist stands in front of a large replica of the 1932 Siamese Revolution plaque as they gather to commemorate the 89th anniversary of the end of absolute monarchy at Democracy Monument in Bangkok on Thursday. (AFP photo)

Hundreds of pro-democracy protesters rallied in Bangkok on Thursday to call for the government's resignation, defying warnings from authorities about the kingdom's soaring coronavirus cases.

The marches came on the 89th anniversary of the Siamese Revolution — the uprising that transformed Thailand from an absolute to a constitutional monarchy.

Bangkok was rocked by near-daily protests against Prime Minister Prayut Chan-o-Cha's government in the second half of 2020, but the pro-democracy movement has lost steam after virus outbreaks and the jailing of student leaders.

Authorities have clamped down on public gatherings as the kingdom grapples with a third wave of infections, with its daily case number hovering around the 3,000 mark.

Despite police warnings, hundreds gathered at Democracy Monument, a major intersection in Bangkok, and marched in the direction of Parliament House to protest against the rule of Prayut, the former military chief who came to power in a 2014 coup.

Early-bird protesters gathered at the intersection before dawn for a candlelight ceremony.

Som, a 16-year-old student, said she wasn't worried about the coronavirus risk.

"We have never had any real democracy," she told AFP. "The country is not going anywhere."

Student leader Parit "Penguin" Chiwarak, who is facing royal defamation charges and was released on bail last month, marched to a drum beat wearing a plastic golden crown and carrying a flag.

Some demonstrators carried signs that read "Abolish 112", a reference to the kingdom's harsh royal defamation laws that carry a 15-year jail term for those convicted of insulting the monarchy.

One protester was dressed like the Statue of Liberty and demonstrators burned a mock constitution — in the same week the Thai parliament debated changes to the country's charter.

"Even those who were on the government's side are now calling out the government's work and criticising failed government efforts," said protest leader Panupong Jadnok as he walked alongside demonstrators. (continued below) 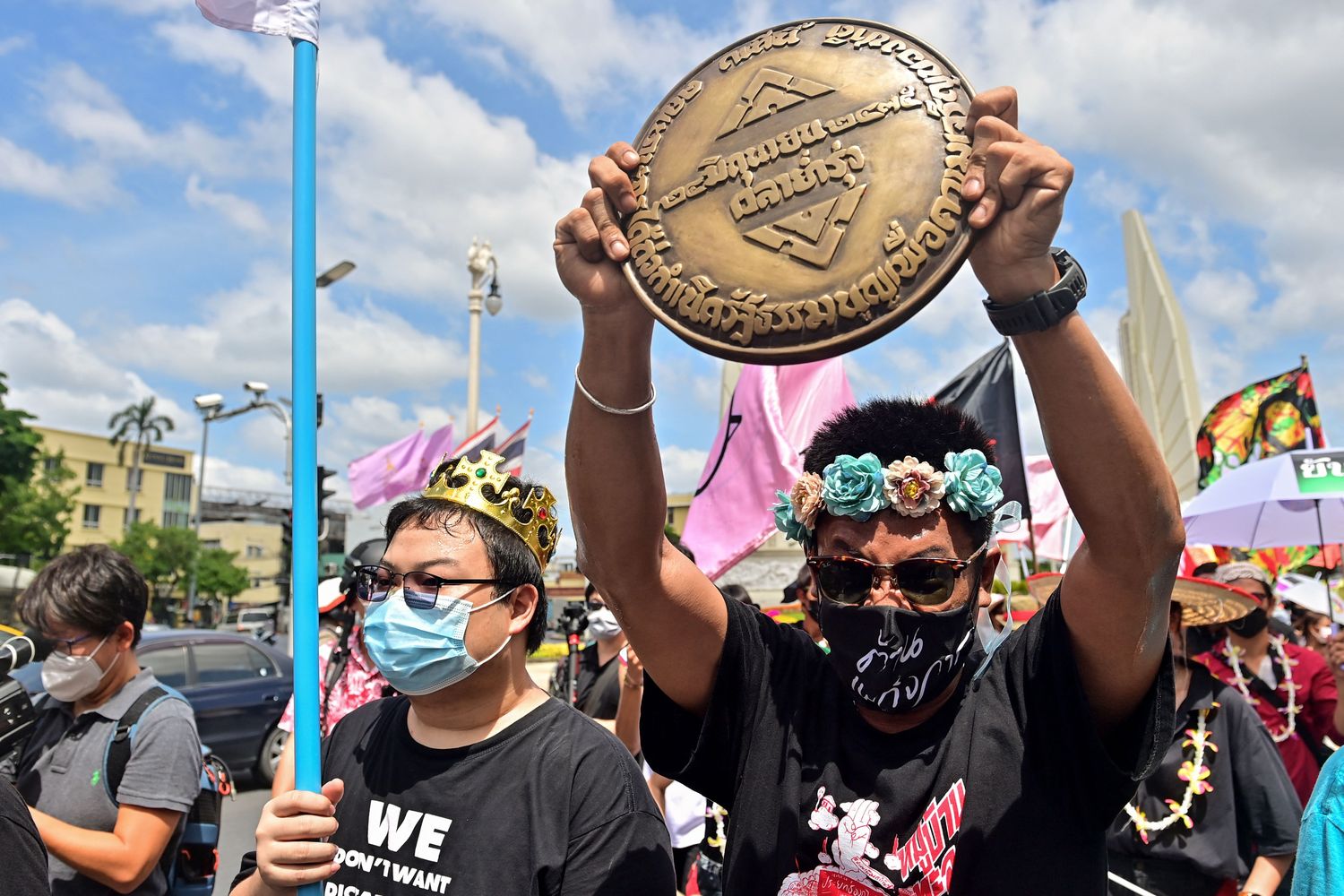 Activist Jatupat "Pai Dao Din" Boonpattararaksa (right) holds a replica of the 1932 Siamese Revolution plque beside fellow activist Parit "Penguin" Chiwarak during an anti-government march as they commemorate the anniversary of the revolution in Bangkok on Thursday. (AFP photo)

Protesters massed outside parliament in the afternoon after a prolonged, circuitous march due to a police presence hindering a more direct route.

Outside the legislature opposition MPs received their demands, and a lawmaker from the ruling Palang Pracharath party, Sira Jenjaka, made a brief appearance on a makeshift stage with the protest leaders.

Inside the building lawmakers are expected to vote long into the night on 13 draft constitutional amendments.

Scores of riot police with two water cannon trucks were locked in a standoff with a small group of protesters near Government House.

The pro-democracy movement sent shockwaves through the country's establishment last year, particularly the most controversial demand, a call to reform how the monarchy operates.

About 150 people have been charged since the movement started, with key leaders hit with multiple counts under the tough royal defamation law.

Many of them were released on bail under conditions that include not protesting.