A four-day no-confidence debate, the third of its kind against the government, kicks off on Tuesday with a long list of allegations ranging from flawed management to corruption.

The grilling will revolve around the government's handling of Covid-19 and related issues such as the national vaccine rollout and economic fallout from the crisis.

However, academics believe the censure debate is unlikely to topple the government and more or less aims to seek support from anti-government protesters who are taking to the streets to call for Prime Minister Gen Prayut Chan-o-cha to step down from his position. 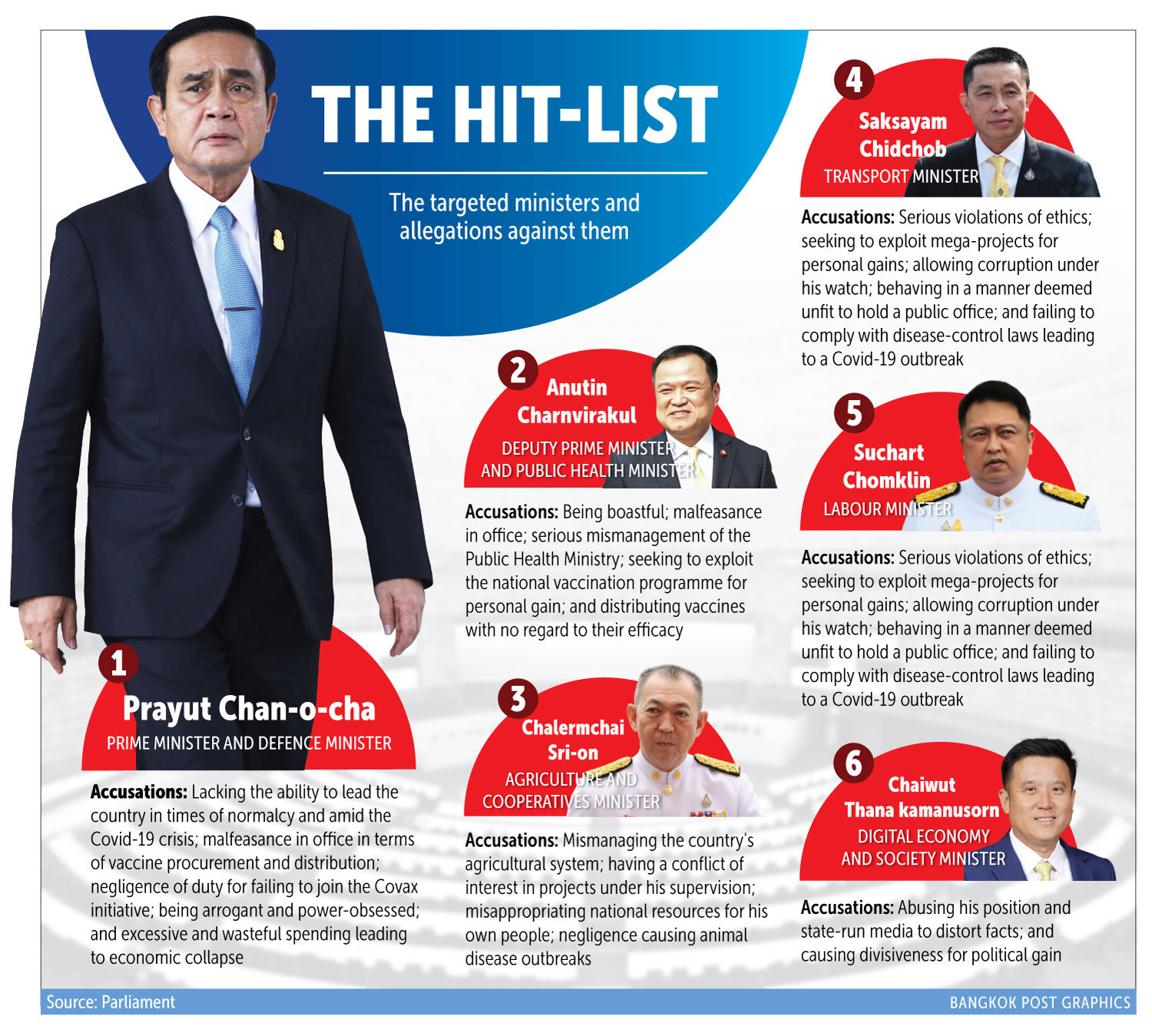 Yutthaporn Issarachai, a political scientist at Sukhothai Thammathirat Open University, said Gen Prayut and the five ministers will survive the censure debate no matter how intense the grilling is. He said the coalition parties remain on good terms and the no-confidence debate will not make government MPs cross the floor or prompt coalition parties to withdraw support.

Despite this, the censure debate is deemed necessary in the wake of demonstrations and public questions surrounding the handling of the pandemic, the vaccination programme, and the associated economic fallout, he said. Moreover, the no-confidence debate is likely to keep the opposition connected with protest groups who have intensified pressure for the prime minister's resignation, he said.

"The chance of coalition partners pulling out anytime soon is highly unlikely. The budget spending and the reshuffle of state officials aren't complete. And I don't think there is a knock-out punch," he said. "The unity in the opposition is as loose as that in the coalition government. What to watch is how this will connect with street politics."

Mr Yutthaporn said the debate is likely to focus on two sets of problems: political problems related to street demonstrations and the handling of Covid-19 and related issues.

Stithorn Thananithichote, director of the Office of Innovation for Democracy at King Prajadhipok's Institute, said the debate is unlikely to topple the government because the ministers from the three coalition parties are also targeted.

By targeting the coalition parties, the government MPs will band together and vote for each other, he said, adding that the opposition would have had a better chance had it singled out Gen Prayut.

Mr Stithorn also said the Pheu Thai Party does not go for make-or-break tactics and is intending to instead show the public that the opposition is doing its job and keeping the government in check. The academic said he believes that the main opposition party would be ready to switch camps and join the government if Gen Prayut happened to step down from the post.

Opposition leader and Pheu Thai MP Sompong Amornvivat promised to lay bare flawed government management and hoped that such information would prompt coalition parties to pull away and cease supporting Prayut's regime. He admitted that the opposition which has only 212 votes in the House cannot bring down the government on its own and called on government MPs to put people's interest first.

"I'd like to ask government MPs to think about their voters. There are elections ahead of us," he said.

Seksakol Atthawong, an assistant minister at the Prime Minister's Office, said on Monday the prime minister and the five ministers were ready to address questions posed by the opposition. He said three support teams were set up to help the targeted ministers in the debate and threatened to take legal action against opposition MPs who crossed the line.

Mr Seksakol also accused the Pheu Thai Party of not playing by the rules, saying it was engaged in a campaign to oust the government and involved "someone overseas" in it. However, he insisted on unity in the coalition government.

Government spokesman Thanakorn Wangboonkongchana said Gen Prayut would respond with facts because any decisions involving Covid-19 were based on information available and discussions from all parties concerned. The government had no concern about the vote which would take place on Sept 4, he said.

The opposition has been allocated 40 hours to grill its targets while cabinet ministers and government MPs were given 18.5 hours to address questions.