Sackings send shockwaves through the halls of power

Capt Thamanat has been accused of being behind a move to topple Gen Prayut in last week's censure debate.

The PPRP leader is said to have been informed of the sacking after the removal was royally endorsed and up for public announcement. It's reported that Gen Prayut did not offer much of an explanation to Gen Prawit except that he had his reasons and he would take care of things.

It is known that Capt Thamanat and Narumon Pinyosinwat, who was also sacked from the deputy labour minister role, are close to Gen Prawit and have allegedly tried to keep other PPRP figures from the party leader's inner circle. There are concerns about their growing party clout. 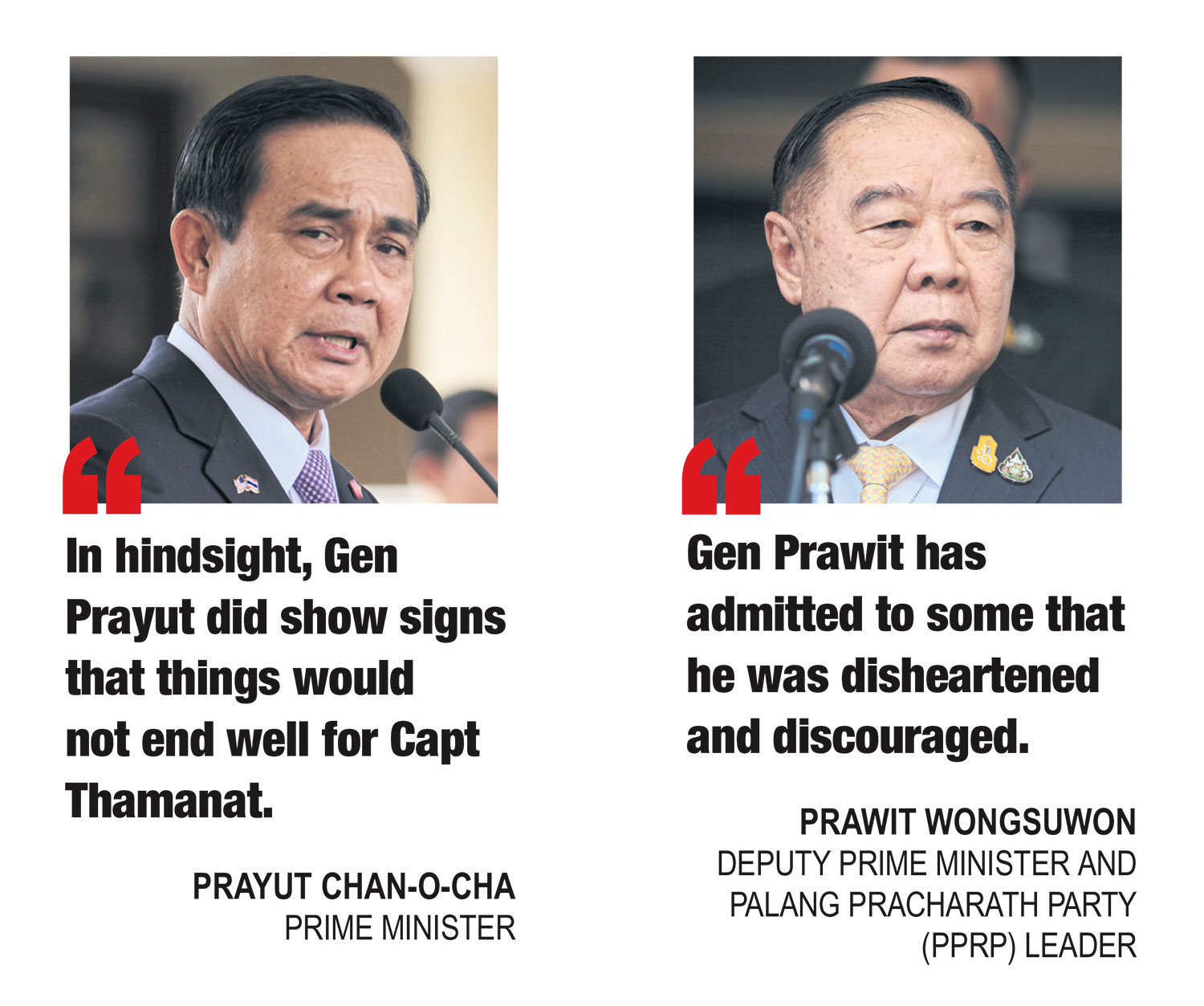 While those at Government House were aware that Gen Prayut sought an audience with the King following the censure debate, they speculated it involved the upcoming annual military reshuffle, not the fate of Capt Thamanat and Ms Narumon.

Gen Prayut and Capt Thamanat were believed to have cleared the air in a meeting hosted by Gen Prawit ahead of the censure vote last Saturday. The prime minister survived the censure motion and he appeared content with the outcome.

In hindsight, Gen Prayut did show signs that things would not end well for Capt Thamanat. The premier reportedly gave Capt Thamanat the cold shoulder at the cabinet meeting on Tuesday. He was also quoted as telling National Defence College students at Government House on Thursday that there were times he let his guard down and was almost caught in an ambush.

The removal order was also released just as Capt Thamanat's resignation letter was circulated in what is widely seen as a move to confirm the minister was relieved from the post under Section 171 of the charter.

It is reported that Gen Prayut will narrow the political distance between himself and the PPRP MPs, instead of letting Gen Prawit take care of political work alone. Several PPRP key figures have offered to lend him a hand.

Even though Capt Thamanat has not resigned from the PPRP's secretary-general role, it is widely believed that his time with the party is running out. Deputy Finance Minister Santi Promphat is tipped to replace him after missing out on the chance in the previous party shake-up in which Capt Thamanat assumed the powerful position.

Some political analysts are convinced that the PPRP's future also depends on Capt Thamanat and his exit from the ruling party may spell its doom.

Gen Prayut's decisiveness is widely believed to have affected his relations with Gen Prawit and his position in the PPRP with the latter said to be mulling over washing his hands of politics. After the dismissal of the two deputy ministers, Gen Prawit has admitted to some that he was "disheartened and discouraged". However, he is unlikely to seek retirement from politics soon.

Gen Prayut needs to maintain solidarity between himself and his two military brethren -- Gen Prawit and Interior Minister Gen Anupong Paojinda -- to maintain the government's political strength so his administration remains intact for its full term until 2023.

The move also sends a message to PPRP MPs and coalition partners that Gen Prayut can be tough when needed.

For his supporters, Capt Thamanat's departure will do more good for the government than harm. Despite his political clout, he's a controversial politician with a questionable background.