Pro-democracy protesters wrapped Bangkok's Democracy Monument with a black sheet hung with pictures of Prime Minister Prayut Chan-o-cha at the climax of a "car mob" rally that started hours earlier at Asoke intersection.

Earlier, demonstrators and vehicles gathered at Asoke intersection in Bangkok for a key rally to mark the Sept 19, 2006 coup that protest leaders say paved the way for PM Prayut's power.

More than 1,000 cars, motorcycles and other vehicles set off from Asoke intersection in heavy rain, the beginning of the "car mob" rally set to wind through the streets of the capital in another bid to oust Prime Minister Prayut Chan-o-cha.

The demonstration was held in conjunction with the 15th anniversary of the Sept 19, 2006 coup that ousted then-prime minister Thaksin Shinawatra. That was followed by the May 22, 2014 coup that marked the beginning of Gen Prayut Chan-o-cha's long premiership. 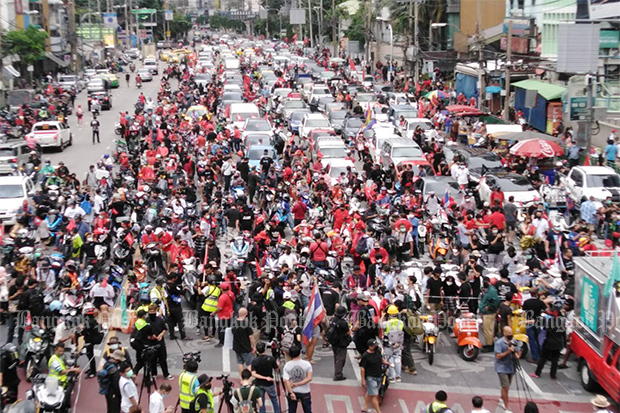 Cars and motorcyles kick off an anti-coup and anti-government rally at Asoke intersetion on Sunday. (Photo: Apichit Jinakul)

The two coups were closely connected, red-shirt leader Nattawut Saikuar said before the rally kick-off. "The 2014 coup was staged to show that the one in 2006 was not a waste of effort (by the army)," he said.

Red-shirt activist Sombat Boonngam-anong said the armed forces justified military coups as a way to resolve political conflicts, but in reality military intervention was used to open the doors for generals to enter politics.

A long procession of about 500 cars and more than 1,000 motorcycles began the political convoy set to head over the Krungthep Bridge to Thon Buri and then recross the Chao Phraya river to end at Democracy Monument.

The rally kicked off with a piece of dramatic symbolism. Mr Nattawut, who donned a taxi uniform, rammed a taxi into a cardboard mockup of a tank while demonstrators chanted for Gen Prayut's ouster. The stunt was a reminder of taxi driver Nuamthong Praiwan, who spray painted his vehicle with an anti-coup message and smashed into an army tank on Sept 30, 2006 to show his opposition to the coup. 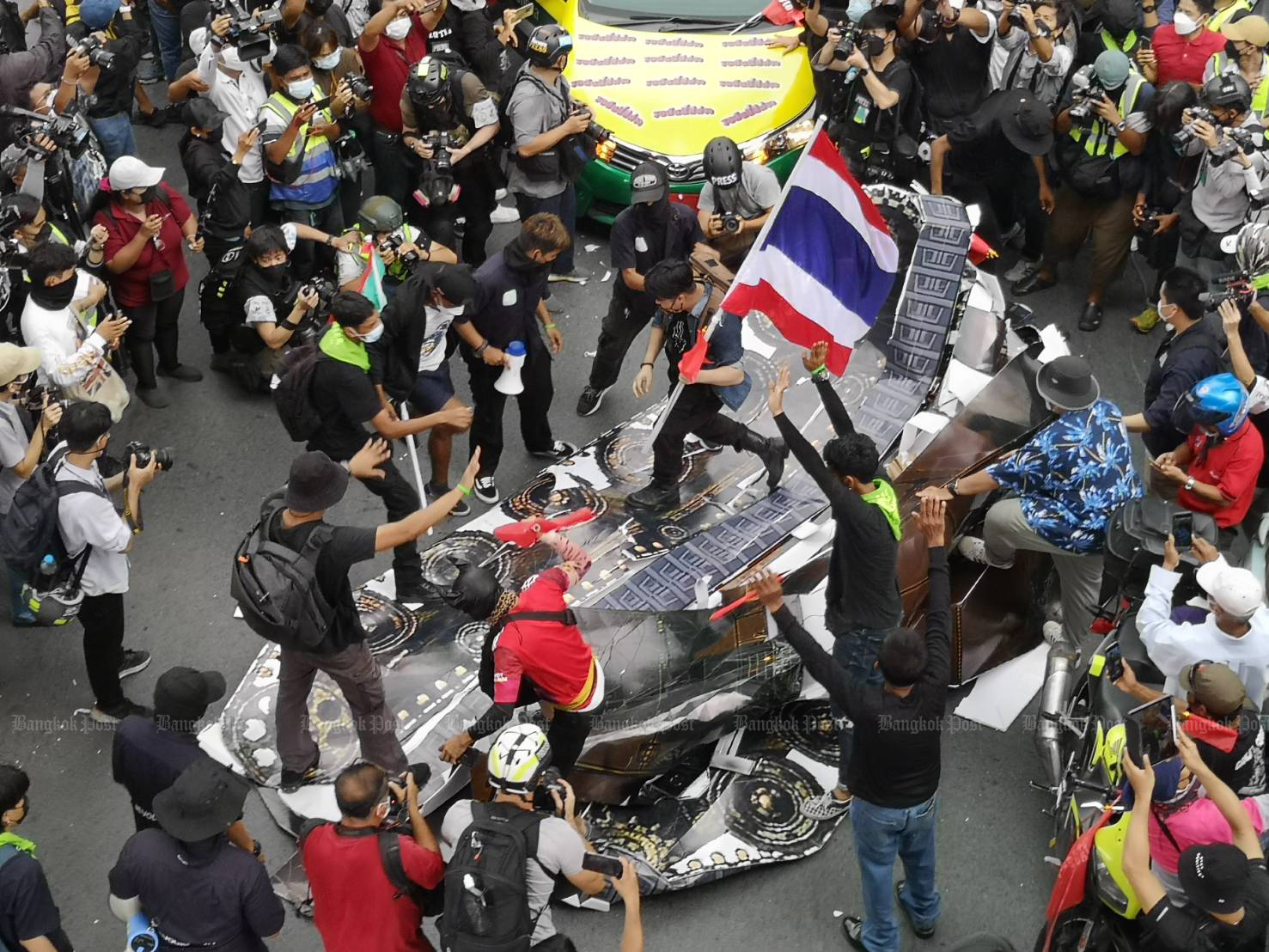 Protesters step on a mockup of a tank after it was flattened by a taxi driven by protest leader Nattawut Saikuar. (Photo: Jetjaras Na Ranong)

Mr Nattawut said Sunday's rally would send a strong message that military coups must end and Gen Prayut must step down.

"Gen Prayut rose to seize power but he has not solved problems," he said.

The red-shirt leader admitted the political fight against the prime minister was long, as the Covid-19 outbreak hampered large gatherings of people.

At the end of the rally at Democracy Monument, Mr Nattawut said the protesters would not give up their demand for Gen Prayut to step down. Mr Sombat said that 15 years after the coup in 2006, Thailand was moving backwards.