The Constitutional Court on Wednesday ruled that the actions of three protest leaders at a rally at Thammasat University in August last year were an attempt to overthrow the constitutional monarchy.

The ruling involved allegations by Natthaporn Toprayoon, a lawyer and former adviser to the chief ombudsman, who petitioned the court to consider whether the actions of human rights lawyer Arnon Nampa, Panupong Jadnok and Panusaya Sithijirawattanakul violated Section 49 of the constitution.

The section prohibits people from using their rights and freedom to overthrow the democratic regime with the King as head of state.

The majority of Constitutional Court judges ruled the actions of the trio had covert intentions to exercise their rights and liberties to undermine and overthrow the democratic regime with the King as head of state. The judges ordered the trio and their supporters to stop them.

At a rally at Thammasat University's Rangsit campus in Pathum Thani's Khlong Luang district on Aug 10 last year, Ms Panusaya read out a set of 10 demands including reform of the monarchy. The incident shocked many people and they began to accuse the protesters of crossing the line.

Speaking after the court's ruling, Ms Panusaya voiced disagreement with it, saying it was not acceptable.

"The 10 demands were not intended to overthrow but reform the monarchy which will bring improvements to the institution. Proposed amendments to Section 112 [of the Criminal Code, or the lese majeste law] are not an attempt to overthrow the constitutional monarchy either. We insist that we will go ahead with the push for the 10 demands,'' Ms Panusaya said. 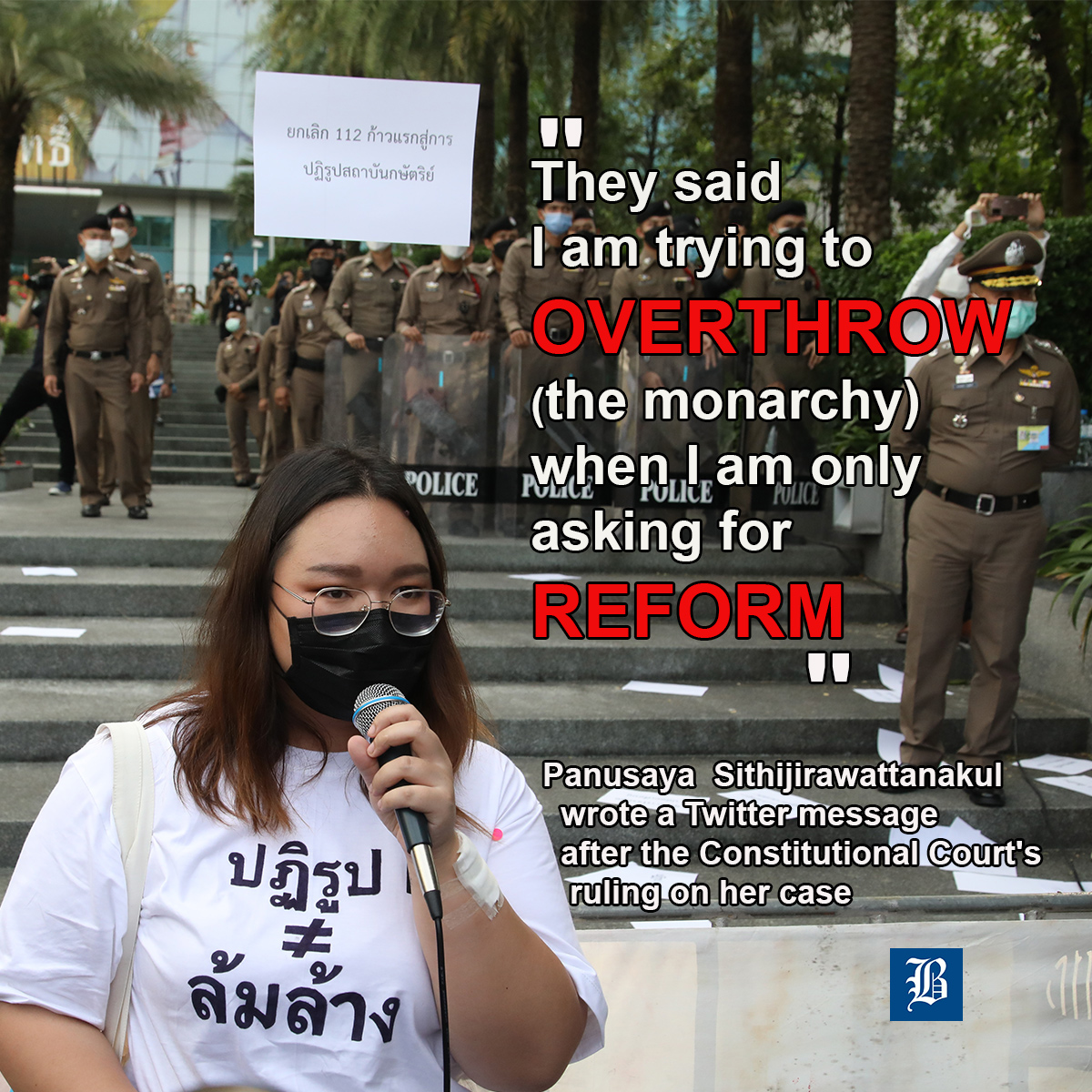 Mr Arnon and Mr Panupong did not show up at the court to hear the ruling as they are now in prison after facing several charges including lese majeste.

Ms Panusaya said she was concerned the court's ruling may affect the move to table a motion to amend Section 112 before parliament. The protest group will study the details of the ruling before announcing their next move, she said.

Mr Natthaporn said the ruling will pave the way for further criminal action against the protesters. The court's ruling is legally binding on all agencies, he added. He said he had also lodged a criminal lawsuit against the trio with the Office of the Attorney-General (OAG).

However, observers noted that if the trio are to face criminal action on charges of trying to overthrow the constitutional monarchy, there must be solid evidence to back such allegations.

It will be difficult to pursue criminal proceedings against them based only on the speech they made during the rally, according to observers.

Jade Donavanik, a legal scholar and former adviser to the 2017 Constitutional Drafting Committee, said anyone who still supports the protest movement or takes part in its activities will also face legal action as police will cite the Constitutional Court's ruling as a basis for pressing criminal charges.

Stithorn Thananithichote, director of the Office of Innovation for Democracy at King Prajadhipok's Institute, said the protest movement will be rendered powerless following the court's ruling.

He also said Section 49 of the constitution did not stipulate penalties for violators, so it remains to be seen whether the Criminal Court will cite the Constitutional Court's ruling for action during trials against the trio who still have other criminal cases pending against them.

Yutthaporn Isarachai, a political scientist from Sukhothai Thammathirat Open University, said he expects the court's ruling will be cited during their trials. Those found guilty of rebellion or trying to overthrow the constitutional monarchy will face life imprisonment or death under the Criminal Code. 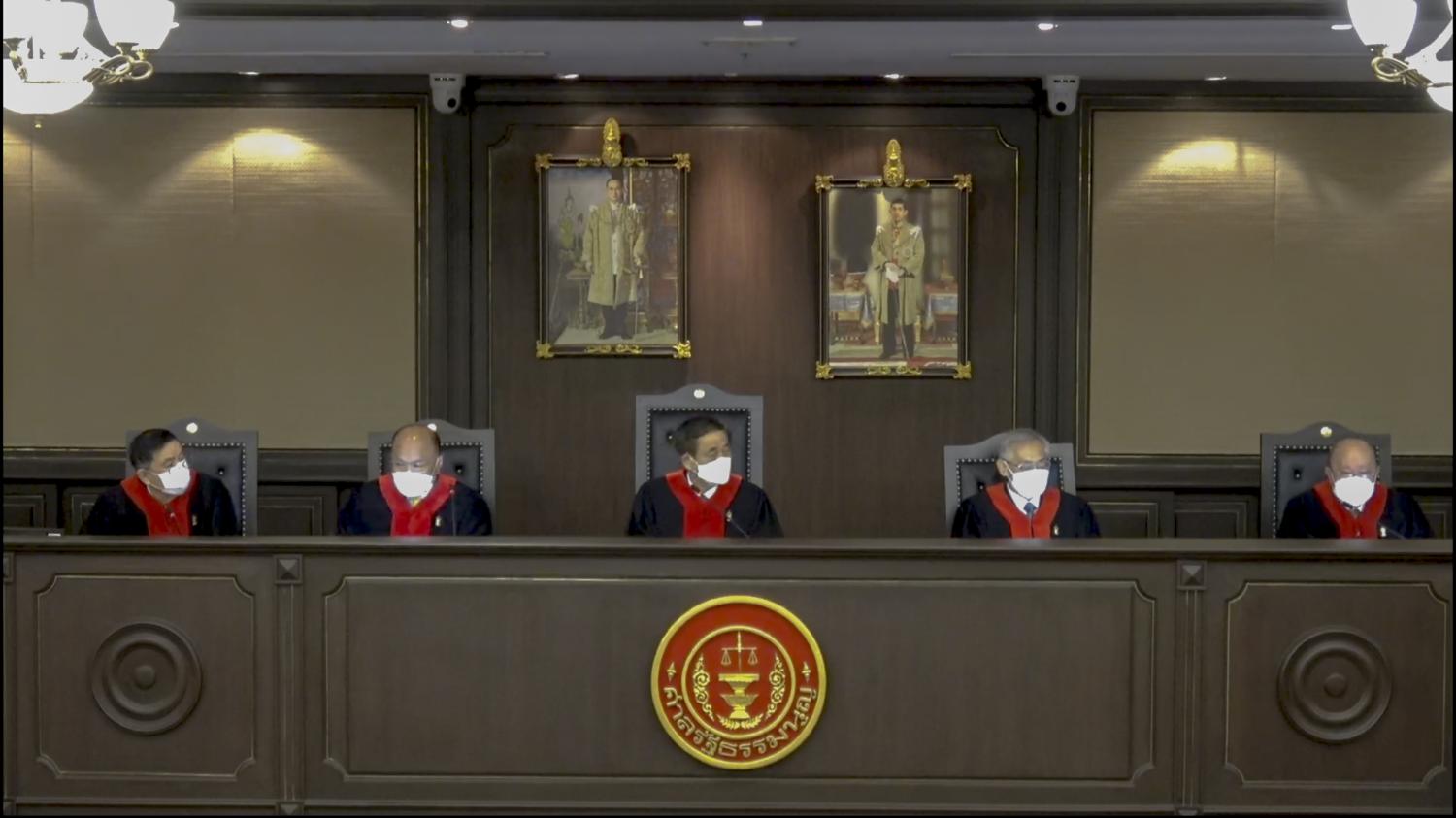 Constutional Court judges on Wednesday rule that the actions of three protest leaders — Panusaya Sithijirawattanakul, Arnon Nampa and Panupong Jadnok — during a rally on Aug 10 of last year were an attempt to overthrow the constitutional monarchy. TV screen capture 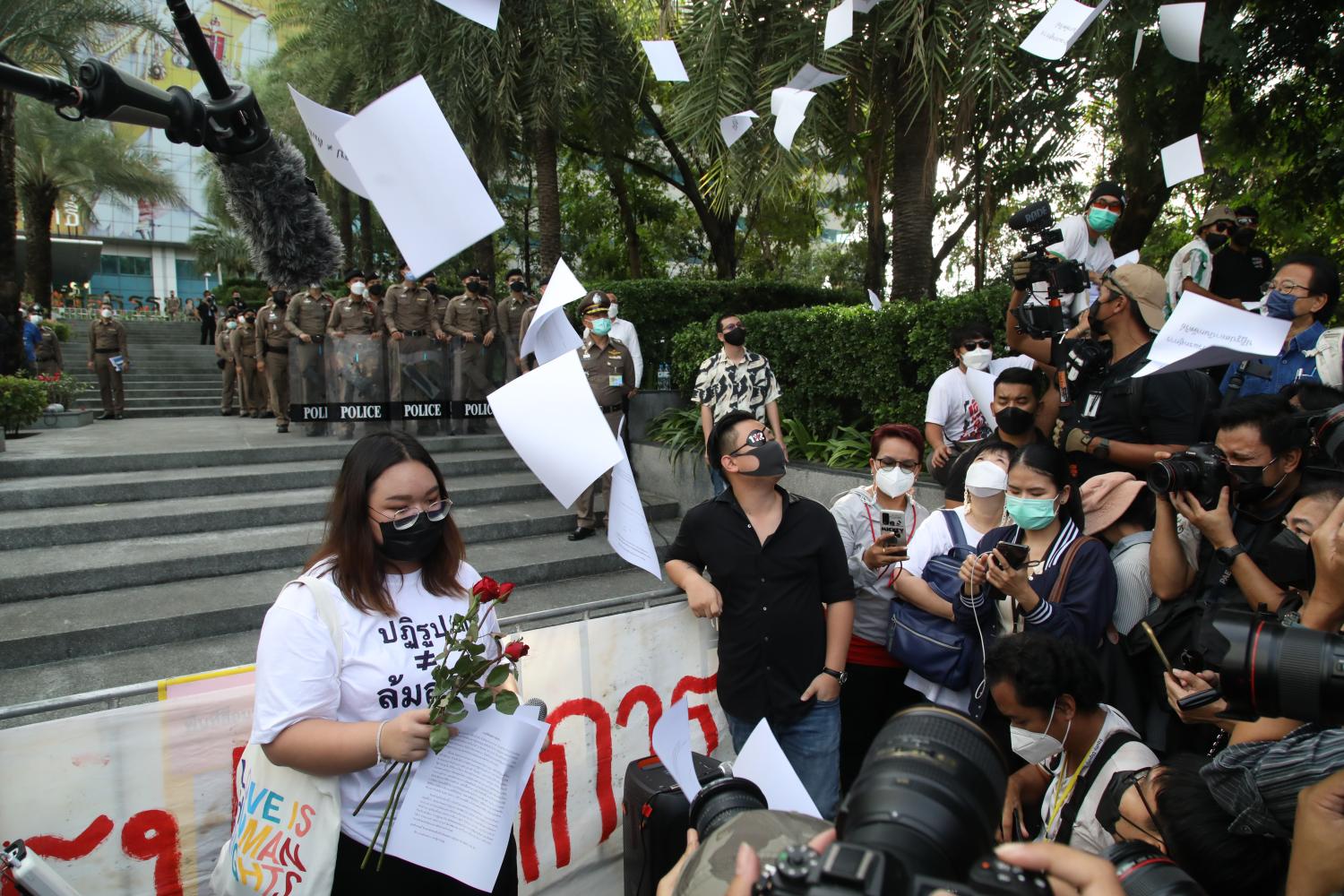 Panusaya Sithijirawattanakul, holding flowers, appears outside the Constitutional Court as her supporters throw leaflets around as a protest against the court's ruling. (Photos: Arnun Chonmahatrakool)