Somsak: A shot in the foot?

Justice Minister Somsak Thepsutin may have shot himself in the foot by securing a royal pardon for "big fish" serving time for engineering one of the country's costliest corruption cases.

It has backfired by not only hurting Mr Somsak as a minister but possibly his future political prospects.

A few weeks ago, the pardon was published in the Royal Gazette announcing the names of those up for early release. Eyebrows were raised as they included former cabinet members and high-ranking civil servants incarcerated for what critics termed was one of the biggest "heists" in history from the nation's coffers.

The case in question was the graft-plagued rice-pledging scheme under the Yingluck Shinawatra administration, which reportedly incurred losses of hundreds of billions of baht.

Huge stockpiles of rice were sold to a bogus buyer in China when in fact it never left the country. Money circulated in the programme ended up in the pockets of politicians and senior state officials, the court was told.

Observers said it was natural that opponents of the scheme -- some of whom had helped gather evidence that created an iron-clad case against the suspects -- were left stunned when they learned the pardon sought by the Justice Ministry and the Corrections Department would see the guilty parties walk free after spending only several years behind bars.

Among the high-profile convicts to benefit are former commerce minister Boonsong Teriyapirom who will see his 48-year sentence reduced to 10 years and eight months, while his former deputy, Poom Sarapol, now expects his 36-year sentence to be lowered to five years.

Both were convicted in 2017 by the Supreme Court's Criminal Division for Persons Holding Political Positions.

Instrumental in exposing the graft was Dr Warong Dechkitvigrom, leader of the pro-monarchy Thai Pakdee Party. The thought of seeing people he worked hard to put in jail to pay in full for their crime having their sentences cut by more than half came as a huge blow.

He took to social media and directed his opposition, not to Mr Somsak, but to Prime Minister Prayut Chan-o-cha.

Dr Warong reminded Gen Prayut he was able to stay on as premier because people trusted in his honesty. However, the pardon sought by the Corrections Department and the Justice Ministry pointed to blatant injustice.

Mr Somsak's move showed punishment for corruption could be reduced to a simple slap on the wrist, undermining the sanctity of the law. Unscrupulous politicians would be unafraid of getting punished for graft because there were loopholes to be exploited.

Dr Warong added that early release of the rice scheme convicts was tantamount to countermanding the court's ruling to impose heavy jail sentences.

He urged Gen Prayut to do what was right in dealing with the issue. The premier has since appointed a panel to review criteria for applying for a royal pardon to cut prison terms for inmates convicted of graft.

"The best course of action to take is to remove Mr Somsak as justice minister and straighten out regulations and the Correction Department's authority to request a royal pardon for convicts. The politicians in jail for corruption must be exempted from a pardon," Dr Warong said.

He said the issue could undermine the justice system. A multitude of resources and effort had been utilised to bring the perpetrators to justice only to see it all undone without a sound reason. He insisted this must be addressed by the prime minister.

The former judge noted that the inmates convicted in the major corruption case qualified for sentence reductions four times in a row in less than 16 months -- from Aug 15, 2020 to Dec 6.

He said the insidious danger from the reckless move to free some people before they had the chance to repent was the misconception that there is a legal backdoor to take advantage of.

He feels a petition should be lodged with the Constitutional Court, via the Office of Ombudsman, asking it to decide if a decree on an amnesty is against the charter.

Meanwhile, Mr Somsak may find the early release of the main characters behind the rice-pledging graft disruptive to his future plans should he contemplate moving from the ruling Palang Pracharath Party (PPRP).

He is one of the founders of the Three Allies faction in the PPRP. The faction's reported strained relations with some key figures in the party could drive it to either return to the main opposition Pheu Thai Party or establish a new one.

However, the pardon controversy could see Mr Somsak's image change from that of a political asset to one of a liability. It could even limit his options in politics ahead of the next election which may be held later next year.

For more than 10 days, Pathum Thani governor Narongsak Osottanakorn had kept political watchers in suspense over whether he would accept the ruling Palang Pracharath Party's (PPRP) offer and run on its ticket in the next Bangkok governor election. 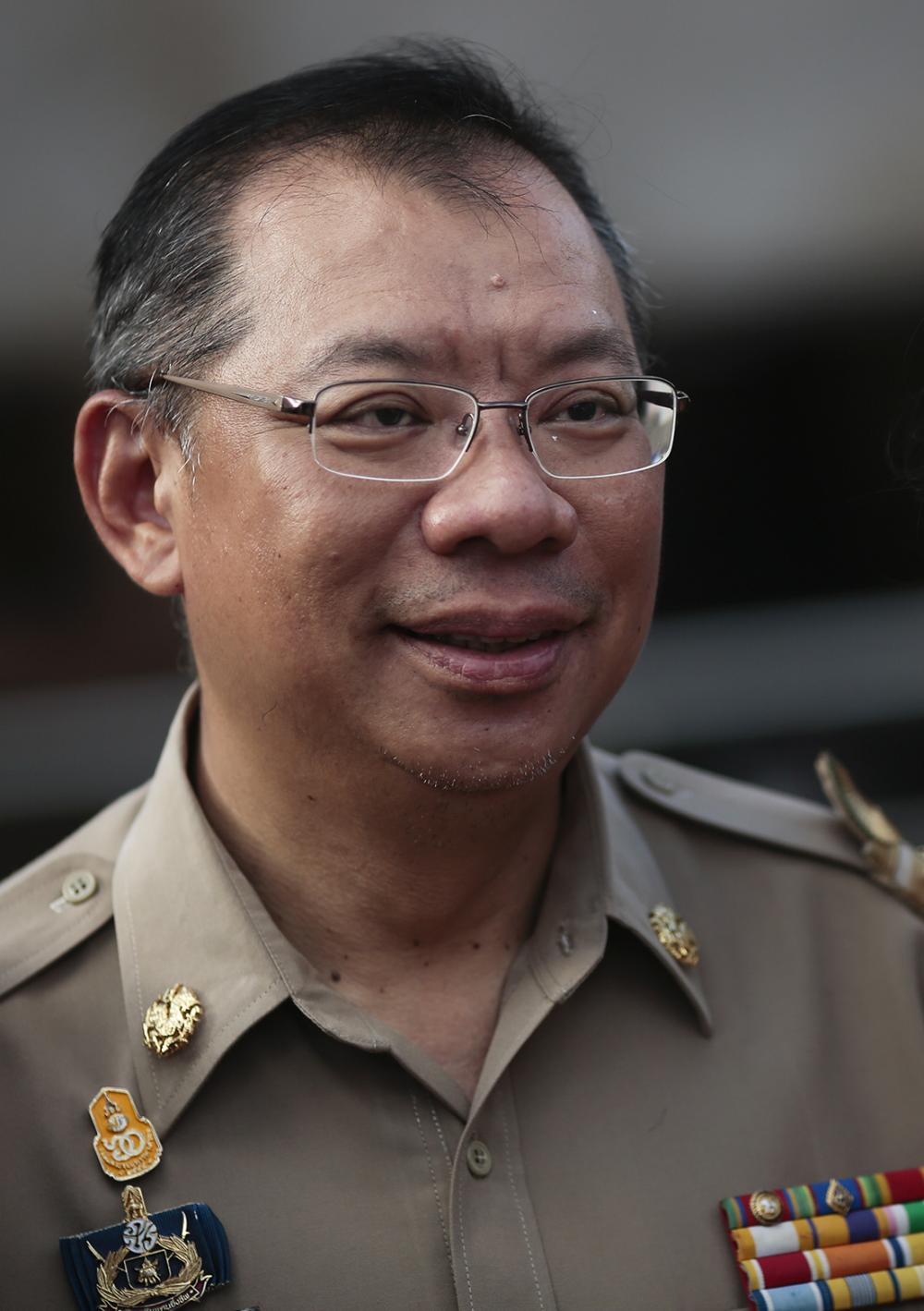 On Dec 5, it emerged that Mr Narongsak, popularly known as the "Wild Boars" governor, had been approached by the PPRP to stand as its candidate in the election probably sometime in the middle of next year.

After that, he held his peace as observers were most eager to hear a decision straight from the horse's mouth.

He finally broke his silence on Tuesday when he announced he would not run, citing his ineligibility and lack of political desire.

Many political observers believed that had Mr Narongsak entered the race, he would have had a promising chance of clinching victory, especially with the PPRP backing him.

The country and the world came to know Mr Narongsak as governor of Chiang Rai who directed the rescue of the Wild Boars football team and their coach, who were trapped in one of the province's famed cave systems, in 2018. The governor rose to fame overnight for his strong leadership and calm, unassuming disposition shown during the rescue operation.

He was subsequently appointed governor of Phayao, Lampang and now Pathum Thani. In every province he served his popularity grew and the PPRP drew up a grand scheme to further its political cause with Mr Narongsak as its main player.

It was reported the PPRP had tried to woo Mr Narongsak by offering to nominate him as its prime ministerial candidate in the next general election. However, Mr Narongsak declined the offer, saying he had no desire to run the country.

The PPRP refused to give up and asked him again, this time to be its candidate for Bangkok governor.

The ruling party was again left disappointed when Mr Narongsak told a press briefing on Tuesday that he had no interest in contesting the gubernatorial poll. Even if he felt any appetite to be Bangkok governor, he would not have been eligible because he would not have been a Bangkok resident long enough to stand as a candidate.

His calling was to be a governor in the provinces and not Bangkok, which is much harder and more complex to run.

The Bangkok election will possibly be reduced to a four-horse race involving former transport minister Chadchart Sittipunt who is poised to register as an independent candidate, the Democrat Party's Suchatvee Suwansawat, a candidate yet to be named by the Move Forward Party (MFP) and whoever is finally nominated by the PPRP.

An analyst said the PPRP would face an uphill battle finding a candidate who can match Mr Narongsak's calibre. Even though no date has been fixed on the governor poll, an early start on self-introduction to voters would let a potential candidate gain a firm footing in an electoral race.

The analyst noted that traditionally, the Bangkok governor elections tended to be dominated by two strong candidates fielded by large parties. Votes were then generally split between them, which allowed the winner to rake in more than a million votes or close to it.

However, the next election is predicted to be a close race between several candidates although the Pheu Thai Party has opted out of the next poll, saying it would rather lend support to pro-democracy candidates.

According to a source, the party has turned its back on the poll out of concern that if it put up a candidate, it might undermine Mr Chadchart's chances of winning.

Pheu Thai leader Cholnan Srikaew has admitted the party would have liked to have fielded Mr Chadchart who is thought to command a large following in the capital.

The analyst said Mr Chadchart can strike a chord with voters loyal to Pheu Thai although some of them could swing to the MFP since both parties are arch-critics of the government and promote a common, pro-democracy stand.

On the other hand, Mr Suchatchavee, a former rector of King Mongkut's Institute of Technology Ladkrabang, is expected to capitalise on the support of students and young professionals as he has built a reputation of being a progressive thinker who can act decisively on his pledge to pull Bangkok out of its myriad of problems.

Then there is also the Thai Sang Thai Party founded by Khunying Sudarat Keyuraphan, the former Pheu Thai chief strategist. The party has maintained a strong following in several constituencies including those in the north of Bangkok.

The analyst reckons that if the PPRP fails to come up with an impressive candidate, the votes to "stave off" candidates supported by Pheu Thai and put up by the MFP will go to Mr Suchatchavee from the Democrats which is a coalition party and the main threat to the two parties.