Govt 'at odds' over Green Line

Commuters wait to board a train at Khu Khot station on the Green Line in Pathum Thani province on Tuesday. (Photo: Apichit Jinakul)

Prime Minister Prayut Chan-o-cha on Tuesday insisted that the proposed extension of the Green Line railway concession must be finalised at the next cabinet meeting.

He was speaking during Tuesday's cabinet meeting to discuss the 30-year extension and maximum fare of 65 baht, according to a source at the meeting.

However, the matter was withdrawn from Tuesday's agenda with the absence of ministers from the coalition Bhumjaithai Party -- including its leader Deputy Prime Minister and Public Health Minister Anutin Charnvirakul, and Transport Minister and party secretary-general Saksayam Chidchob -- thought to be a factor.

Mr Anutin and Mr Saksayam had earlier opposed the extension and this was the seventh time the matter had been tabled then withdrawn prior to a cabinet meeting, according to the source.

Interior Minister Anupong Paojinda said that he had received four queries in writing from the Transport Ministry on Monday, but believed they were issues that had already been dealt with.

Other cabinet ministers also agreed that too much time had been wasted, with Gen Prayut telling those assembled that the plan must be finalised when they next met because "if the cabinet fails to act, they may be sued for dereliction of duty under Section 157 of the Criminal Code", the source quoted the PM as saying.

The Green Line is owned by the Bangkok Metropolitan Administration (BMA), and the concessionaire is the Bangkok Mass Transit System Plc (BTSC).

The Interior Ministry has proposed that the agreement be extended from 2029 to 2059 with the stipulation that the maximum fare goes no higher than 65 baht.

The proposal has sparked public debate, with groups, including The Thailand Consumers Council (TCC), arguing that allowing fares to rise to 65 baht would put Bangkok's electric train system out of reach of the average commuter.

The BMA is looking to offer BTSC a 30-year concession extension. In exchange, BTSC would have to shoulder the BMA's debt of around 37 billion baht.

Speaking after the meeting, Deputy Prime Minister Wissanu Krea-ngam said the Transport Ministry wrote on Monday to seek clarification which the Interior Ministry had yet to provide, so further discussion had to be postponed.

The issues raised by the Transport Ministry are the introduction of a common ticketing system; the BMA's insistence on operating any such system without also investing in it; the Mass Rapid Transit Authority of Thailand's failure to hand over a number of structures and land along two sections to the BMA; and the construction of bridges at Hathairat and Phutthamonthon Sai 2 intersections.

Deputy Interior Minister Niphon Bunyamanee said the cabinet had instructed the Interior Ministry to study the issues raised by the Transport Ministry and present its opinions at the next cabinet meeting in two weeks time.

Responding to the coalition party's absence, Deputy Prime Minister Prawit Wongsuwon, leader of the core coalition Palang Pracharath Party, said the government would have to consider what it should do next.

Deputy Finance Minister Santi Promphat said the cabinet had instructed a number of agencies to study whether there would be any legal hurdles to further reducing the price stipulated in the agreement.

He also said any new deal should benefit commuters and involve a much-needed common ticketing system.

Wanwichit Boonprong, a political science lecturer at Rangsit University, noted that the absence of the Bhumjaithai ministers may indicate a rift within the coalition.

And should the cabinet now go on to ratify the extension agreement proposed by the Interior Ministry, the rift may reach breaking point and prompt Bhumjaithai to walk away from the coalition, Mr Wanwichit said. 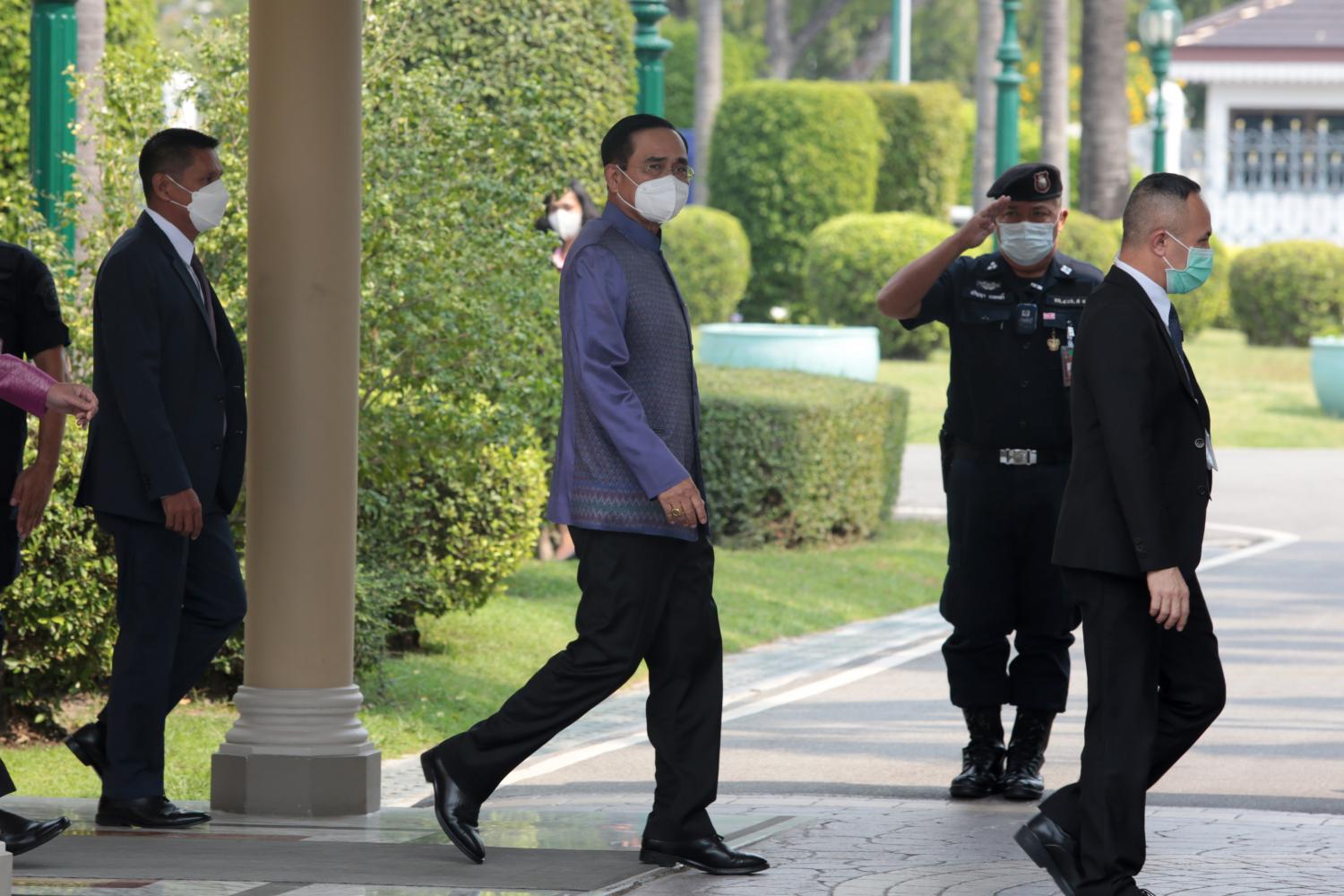 Prime Minister Prayut Chan-o-cha leaves the cabinet meeting at Government House on Tuesday. Ministers from the Bhumjaithai Party were absent from the meeting which was due to consider the extension of the Green Line rail concession, which is opposed by Bhumjaithai. The issue was later withdrawn from the agenda. (Photo: Chanat Katanyu)