Assembly to stress party 'has solutions'

A man looks at an exhibition on the performances of the Pheu Thai Party during its annual assembly in Khon Kaen province last November. (Photo: Pheu Thai Party)

The main opposition Pheu Thai Party is holding its annual assembly on Sunday to rally supporters behind the party's ambition to win at least 250 MP seats in the next general elections.

Pheu Thai is among the big parties convening meetings this weekend. The coalition Bhumjaithai and Democrat parties have scheduled their assemblies on Saturday. 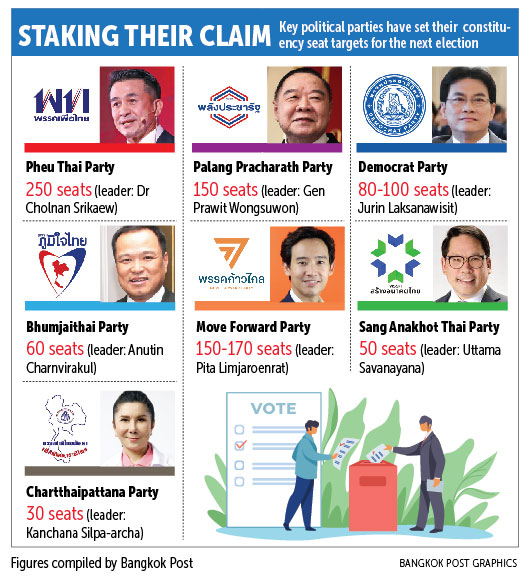 Political parties are expected to use the assemblies to prepare their members for the next election. Pheu Thai said it believed the poll will come sooner than next March, when the government's tenure expires.

Pheu Thai secretary-general Prasert Chantararuangthong said on Wednesday the Sunday general assembly will be titled "Landslide for Pheu Thai, for Every Thai" to reflect the party's goal of winning at least 250 constituency MP seats out of 400 that are up for grabs.

Mr Prasert, also a Nakhon Ratchasima MP, said the party will convey the message at the meeting that Pheu Thai has solutions to crises Thailand is facing which are the product of the government's incompetence.

He insisted that numbers matter. If the party wins at least 250 House seats, it will be handed a mandate to push policies that benefit the people, improve the rule of law and return the country to democracy.

Addressing the assembly, to be organised at the party's head office in Bangkok, will be party stalwarts including leader Cholnan Srikaew; chief strategist Chaikasem Nitisiri; and Paetongtarn Shinawatra, daughter of fugitive former premier Thaksin Shinawatra and Pheu Thai's chief of Inclusion and Innovation Adviser Committees.

The Pheu Thai secretary-general said the opposition has prioritised tasks for after parliament reconvenes next month.

It will be busy joining in the deliberation of bills to amend organic laws on parties and the election of MPs. The national expenditure bill coming up in early June will also be addressed.

He said the party has not decided whether to field a candidate in the Ratchaburi by-election that was called after Pareena Kraikupt was disqualified as a constituency MP by the Constitutional Court over alleged encroachment in forest and land reform areas.

Mr Prasert said the party would rather concentrate on preparing for the general election, believing the government will not serve its full term and that polls would come soon.