Former protest leader Suthep Thaugsuban has vouched for Bangkok governor candidate Sakoltee Phattiyakul as he is running independently and has a proven track record of fighting against "Thaksinocracy".

Mr Suthep, who led the now-defunct People's Democratic Reform Committee (PDRC) protest movement against the Pheu Thai Party-led administration, which was subsequently toppled by the 2014 coup, urged Bangkok voters to elect Mr Sakoltee who has been trailing in opinion polls. Mr Sakoltee fought side by side with Mr Suthep as an active PDRC co-leader.

In the build-up to Sunday's governor poll, Mr Suthep took to his Facebook account on Thursday to say Mr Sakoltee had won his endorsement for several reasons.

The independent candidate is well-qualified for City Hall's top job on account of his background in law and his respectable family, Mr Suthep said. 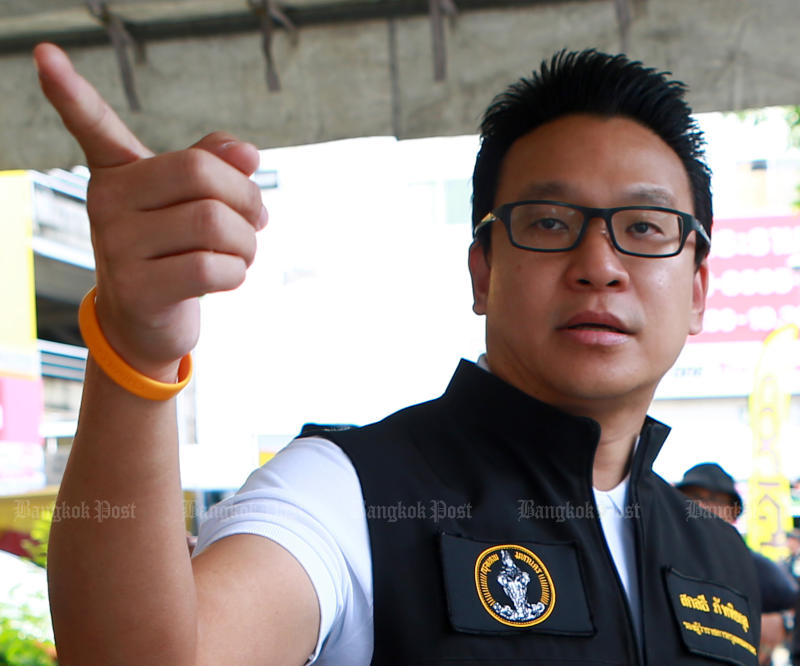 Mr Sakoltee graduated with a law degree from Thammasat University and furthered his studies in the same field at George Washington University in the United States.

The candidate also served as secretary to Jaran Pukditanakul, a former Constitutional Court judge, an experience that burnishes his credentials.

Mr Sakoltee served as deputy Bangkok governor for four years before stepping down to run for the governorship.

Mr Suthep said Mr Sakoltee is well-acquainted with the city's problems and its people while his election promises are practical.

"Mr Sakoltee is genuinely independent with no covert support from any political party," he said.

"Most importantly, he is not a lackey of former premier Thaksin Shinawatra, or a beneficiary of Thaksinocracy," he said, referring to Thaksin's deep-rooted influence and large-scale solidifying of political power.

"He waged a war against that system and we risked jail in the process," he said.

Deputy city clerk Suthathip Son-iam said on Thursday City Hall has been assigned by the Election Commission (EC) to assist in arrangements for the elections of both the governor and Bangkok councillors.

A total of 167,289 personnel will be sent to 6,817 polling stations, Ms Suthathip said, adding they have already rehearsed poll procedures. "The BMA is fully prepared and will ensure the polls are transparent and free of fraud," she said.

Vote counting will be held at polling stations and the BMA's strategy and evaluation department will help record and process the votes, she added.

Somchai Surakarnkul, chairman of the Bangkok local election committee, said ballot casting will run from 8am until 5pm.

Vote counting is expected to take about two hours and finish by 7pm.

The results will be sent to the coordination centre of each district and the last polling station is expected to send in the results by 9pm.

After verification by officials, all the poll results will be delivered to the 2nd BMA Hall in Din Daeng district, Mr Somchai said.

He said the BMA expects to see 70% voter turnout. He urged voters to go to the polls early to avoid any potential rainfall that could obstruct their travel.

Officials will be on hand to help the elderly and voters with physical disabilities to cast their votes. Braille ballot papers will also be provided to help the blind and visually impaired.

Kriangkrai Chongcharoen, director of the BMA's education department, said he has ordered 437 schools run by the BMA that serve as polling stations to be closed on Monday to allow health officials to clean and disinfect their premises and equipment.

Also on Thursday, the Digital Television Association of Thailand, the Society for Online News Providers and 32 news outlets were working with the House committee on political development, mass communication and public participation, the National Telecom Plc, Advanced Info Service and several universities to report the results of all the elections.