Despite big promises in a hard-fought campaign, voters simply want a governor who can fix their problems

A woman casts her vote during the Bangkok governor elections at a polling station at Debsirin School in Pomprap Sattruphai district on Sunday. (AFP photo)

After nine long years, the 4.4 million voters in Bangkok finally get their chance to elect a governor from a diverse pool of candidates on Sunday.

However, the intense competition may have led to misconceptions about the job description of Bangkok governor, who has few powers of his or her own and is expected to excel in coordination skills, according to political experts.

The colourful election campaign advertisements and speeches by some high-profile candidates could have misled people into thinking they were in the middle of a general election.

The advertisements may have painted a larger-than-life picture of candidates and voters should not get too carried away, warned Wanwichit Boonprong, a political science lecturer at Rangsit University.

The expectations Bangkok voters have of the governor -- that he could curb the cost of living or curtail runaway energy prices -- may have been blown out of proportion.

"It's the misconception that passes on a distorted reality about what Bangkok governor can do," he said.

The governor's authority is limited as the Bangkok Metropolitan Administration (BMA)'s power structure fixes his direct responsibilities such as rubbish collection and making use of public spaces.

Given the Covid-19 pandemic and the state of the economy, Mr Wanwichit said the honeymoon period for the new governor will be a short one.

The state of the economy may compel the new governor to look the other way rather than immediately deal with problems such as the illegal occupation of footpaths by vendors struggling to make ends meet. In that case, the governor's public relations team will have a big task on its hands trying to convince voters that election promises may take some time to deliver. 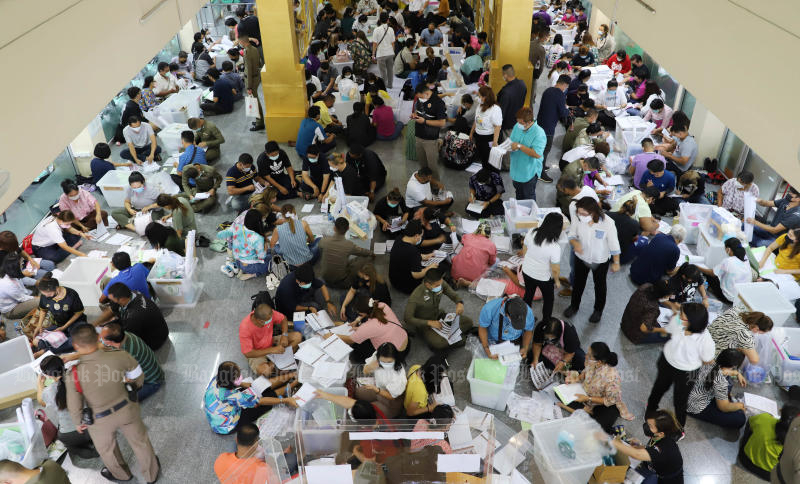 Final checks: Officials fill the Don Muang district office as they organise paperwork ahead of the Bangkok governor election, the first in nine years, and the city council elections. (Photo: Apichit Jinakul)

Voters count on the candidate they elect to be pragmatic and get down to solving the city's problems. They are less interested in "strategic" voting where voters are persuaded to cast their votes for a specific candidate from among those sharing the same political ideology to boost the bloc's chance of winning.

Adopting such a strategy is to overlook a candidate's ability, Mr Wanwichit said.

"Bangkok voters are particular when it comes to issues like the environment, infrastructure, floods, PM 2.5 dust pollution and even taking electrical cables underground to spruce up the landscape.

"They've waited nine years for the governor to come around and straighten things out for them. It's unthinkable to be contemplating a strategic vote at this point in time," he said.

He added people may be stirred to vote by recollections of the Black May uprising of 1992 and the eighth anniversary of the May 22, 2014 coup staged by the now-defunct National Council for Peace and Order which ousted the Pheu Thai Party-led administration.

He predicts a high voter turnout as the Bangkok council elections, which could form a political support base for future general elections, are also taking place on Sunday.

Mr Wanwichit said the credentials of some Bangkok council candidates are comparable to those of MP candidates, suggesting they may be aspiring to enter the next general elections.

The main opposition Pheu Thai Party may be banking on its councillor candidates to solidify its bastion in Bangkok and aid its goal of achieving a landslide victory at the next general elections expected later this year or early next year.

Yutthaporn Isarachai, a political scientist from Sukhothai Thammathirat Open University, said voters were looking for a governor capable of tackling the PM 2.5 fine dust pollution, floods and traffic congestion which are some of the most pressing issues.

He agreed voters' expectations sometimes far exceed what the Bangkok governor is authorised to deliver.

Although the BMA assumes the status of a large-scale local administrative organisation blessed with an 80 billion baht annual budget and staffed by tens of thousands of officials, its scope of legal duties is similar to a municipality or thessaban.

The governor liaises with other state agencies when they need a problem fixed. For example, the BMA knows the PM 2.5 dust pollution is created by vehicles belching exhaust smoke. But it is powerless to catch the motorists releasing the smoke since the authority rests with the police.

Also, the roads in the capital do not all belong to the BMA. Many are operated by the Highways Department, the Expressway Authority of Thailand or the Department of Rural Roads.

With the floods, the BMA has to seek help from the Department of Public Works and Town & Country Planning.

Mr Yutthaporn said voter turnout may surge to 70%, topping the all-time high of 63% in the 2013 gubernatorial poll. He said people may feel enthused about going to the polls for the first time in nine years and the improving pandemic situation.

Mr Yutthaporn said governor candidates who made wild promises should brace for a backlash as the social media users are adept at digging up evidence where those promises have not been met.

Broken promises could dent the popularity not only of a candidate but the party which may be pulling their strings, even if such a candidate claims to be running as an independent.

Stithorn Thananithichot, director of the Office of Innovation for Democracy at King Prajadhipok's Institute, said he did not think voters were hoping for spectacular changes. They wanted the governor to be efficient in taking on practical tasks such as collecting the rubbish on time or expanding green areas.

"Bangkok residents want a better quality of life. They might understand better what is involved in the governor's work after having gone through several elections.

"The voters' expectations of the new governor are high. The governor must be responsive to people's needs, approachable and all ears to suggestions from residents," he said.

There was nothing out of the ordinary about attempts to question the credibility of candidates in the lead-up to the election as long as the information was not fabricated.

He believed many new faces will be elected to the Bangkok council whereas familiar politicians formerly attached to a party may also gain entry under new political groups.

Pawaran Jitrattanasophon, former secretary of the Uncommon International Group and public relations officer of the Association of Students in Thailand, said an ideal governor in the eyes of new voters must be hands-on and do as promised.

"They need to talk the talk and walk the walk," Ms Pawaran, who represents new voters, said.

Many new voters are aware of Sunday's election and will be out in force to vote. They have monitored the candidates' campaigns closely.

They will keep their eyes peeled for any irregularities and will not hesitate to blow the whistle, Ms Pawaran said. Information passed to new voters through various channels could sway their decisions at the polls, she added.

Yada Phonphetrampha, head of the Association for Vendors and Hawkers in Bangkok, said City Hall has been bent on banning microtrading on pavements in locations previously designated as exempt from eviction.

"Street vending is the only source of income for countless families and part of Bangkok's charm," she said.

Before the BMA regulates the vendors, it should open a forum and let all stakeholders participate in brainstorming a solution.

The new governor must manage the vending spaces in a way that keeps the pavement clean and avoid obstructing the pedestrians, she said.

Once the "line" is established, Ms Yada insisted the vendors would not cross it since doing so exposes them to extortion by officials.

Since 2016, the BMA has cancelled 683 of 773 "exempt" spots citywide. With more than 200,000 street vendors setting up their stalls, most have been operating illegally.