Capital vote 'not a bellwether'

Academics say the victory of independent candidate Chadchart Sittipunt in Bangkok's gubernatorial election and the gains made by the Pheu Thai and Move Forward parties in the capital's councillor polls only reflect the political sentiment in major cities.

Thawida Kamolvej, dean of the faculty of political sciences of Thammasat University, said while there is a definite connection between the city election and national politics, it is still uncertain that Pheu Thai would win the next general election with a landslide.

The unofficial outcome of the governor election, in which Democrat candidate Suchatvee Suwansawat and MFP candidate Wiroj Lakkhanaadisorn came second and third, indicated that political affiliations remain a key factor for city voters, she said.

In the next national poll, it is likely the Pheu Thai, Democrat and the Move Forward parties will win most House seats in Bangkok, while the PPRP might find it hard to capture even a single seat, she said.

"The Bangkok results reflect between 20-30% of the political sentiment in major cities. The result of Pattaya's mayoral and council elections should reveal the overall outcome of the national contest," she said.

Olarn Thinbangtiew, a political scientist from Burapha University, said the May 22 contest will become a model for national elections in Bangkok and other urbanised areas in major provinces such as Udon Thani, Khon Kaen, Chiang Mai and Surat Thani.

"Candidates must have good profiles and clear policy platforms, engage voters via social media platforms and secure the support of political parties. The sentiment in other parts of the country will be similar to Pattaya, where politics is influenced by the patronage system and party popularity," he said.

As a result of Mr Chadchart's poll victory, the Pheu Thai Party may win more House seats in Bangkok in the next poll, he said, adding that the government may postpone a rumoured House dissolution, which is widely expected to take place in November. 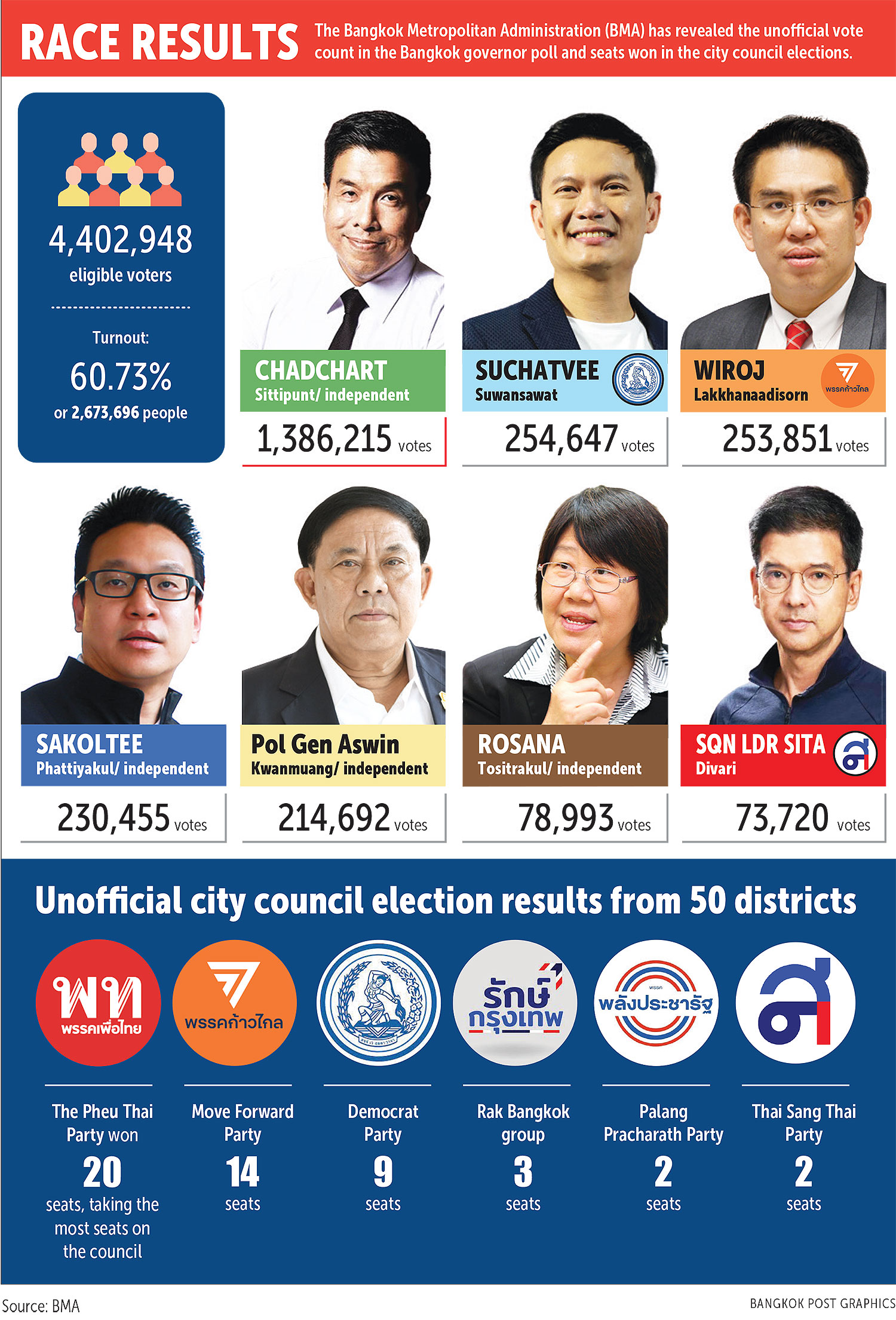 Yutthaporn Isarachai, a political scientist from Sukhothai Thammathirat Open University, said the result of the Sunday election shows that political affiliations have changed.

However, he said it cannot be used to predict the outcome of national politics -- pointing to the mayoral election in Pattaya, in which the MFP could not unseat a candidate backed by former Pattaya mayor Sonthaya Kunplome.

Somjai Phagaphasvivat, an inde- pendent political and economic analyst, agreed with the others, saying the Bangkok election is not a barometer of national politics.

Separately on Monday, Gen Prawit, who is also the leader of the PPRP, brushed off claims that the Bangkok contest reflects the outcome of the next general election, after congratulating Mr Chadchart on his victory.

When asked if the result signalled a landslide victory for the Pheu Thai Party in the next election, the PPRP leader said the party will have to make a thorough assessment first.

Democrat Party leader Jurin Laksanawisit said that despite the party's weak showing at the polls, the party saw the outcome as a sign that the city's residents are still willing to give the party a chance.

"Our governor candidate came second and the party won nine seats on the city council... these are positive signs. We are thankful for the support," he said.

He declined to comment if the result would have implications for the next poll.

Akaradej Wongpitakroj, deputy spokesman for the Democrat Party, said Mr Chadchart won by a landslide due to the government's flawed handling of fuel prices and runaway inflation.