Pheu Thai says bill's a 'trap for the country'

Prime Minister Prayut Chan-o-cha speaks in Parliament on the first day of the budget debate on Tuesday. (Parliament photo)

The opposition took aim at the 2023 budget bill, saying the government is being held to ransom by coalition parties over budget allocations while Prime Minister Prayut Chan-o-cha defended it, saying Thailand still enjoys financial and foreign reserve strengths.

The first reading of the 2023 budget bill began on Tuesday, with Gen Prayut presenting the bill before parliament.

The cabinet approved the fiscal 2023 budget worth 3.18 trillion baht with a deficit of 695 billion.

Of the total, the regular budget stood at 2.39 trillion baht, up by 17 billion or 0.72% from the previous year, accounting for 75% of the total budget.

The government set a budget of 100 billion baht to pay the principal on debt for fiscal 2023, equivalent to fiscal 2022, representing 3.14% of the total.

A 695-billion-baht loan will also be sought to compensate for the budget deficit.

"The 3.18-trillion-baht budget is intended to steer the economy and achieve tangible results, in line with a prediction that the economy will grow 3.2-4.2% this year," Gen Prayut told parliament.

"The 2023 budget is to support post-pandemic economic and social recovery to improve people's quality of life, distribute benefits to all groups, overcome poverty and reduce inequality."

However, Pheu Thai and opposition leader Cholnan Srikaew slammed the budget bill, saying budget allocations failed to take into account people's needs and it lacks adequate planning to lead the country out of crisis. 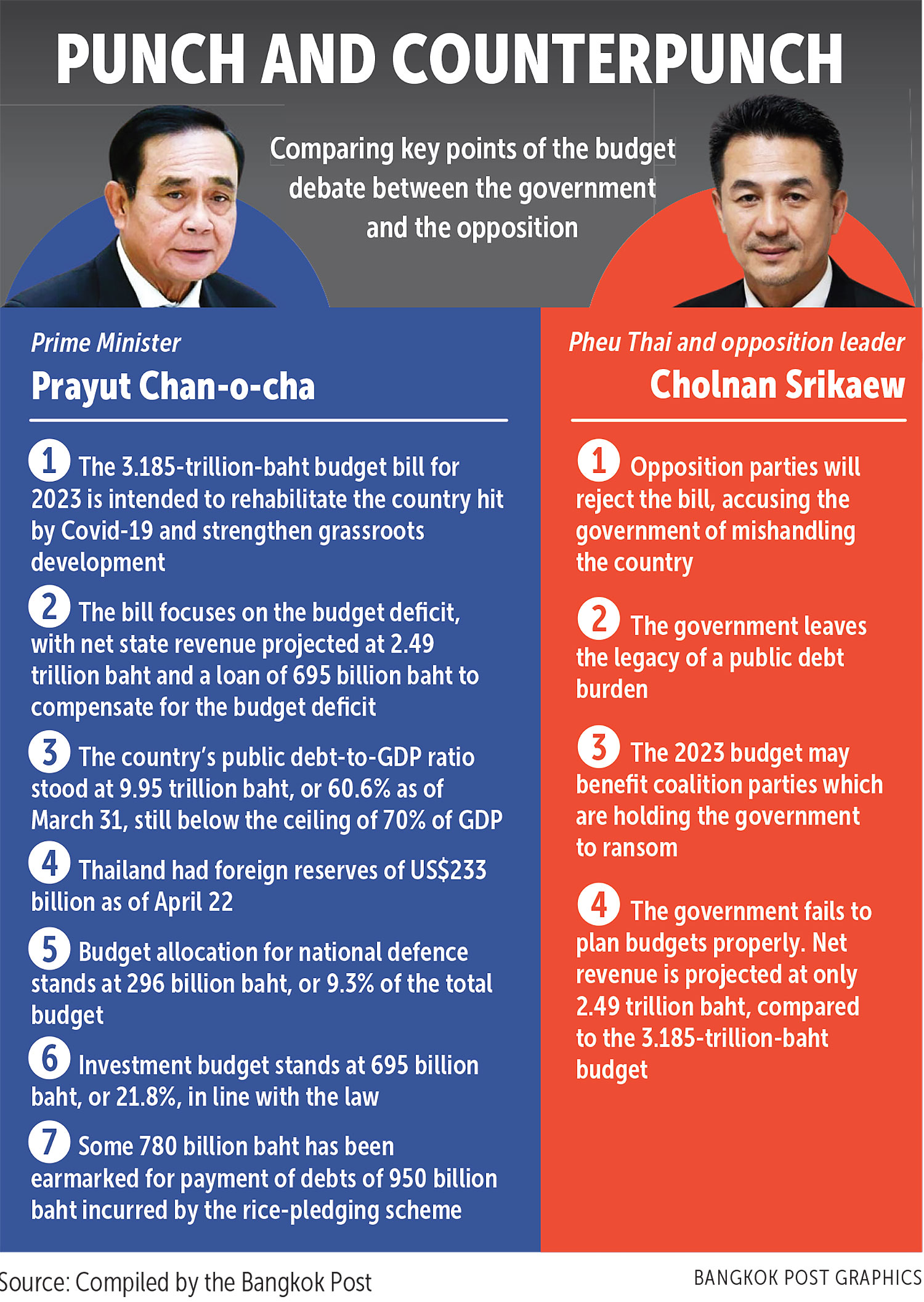 "Opposition parties have agreed we will reject the bill as it will bring the country to its knees," Dr Cholnan said, adding that the government is leaving a legacy of a high level of public debt.

"We can't afford to endorse the budget bill as it will set a trap for the country," he said.

Dr Cholnan also questioned allocations for infrastructure investment projects, saying: "It seems that coalition parties are holding the government to ransom and bargaining for something in exchange for their support by using taxpayers' money.

"We want the budget to be set by a new government ... We want the bill to be rejected in the first reading."

Opposition Move Forward Party leader Pita Limjaroenrat, meanwhile, said that an allocation of more than 300 billion baht for pension payments for civil servants accounts for the greatest portion of the 2023 budget.

The allocation is equal to the amount given to the Education Ministry to take care of students, Mr Pita said, adding that civil servants' pensions have doubled over the past eight years.

Responding to the opposition's criticism that the government did not earmark enough for investment, Gen Prayut said more than 690 billion baht has been set aside for investment, or 21.72% as stipulated by the law.

Moreover, the government has also made other investments with the private sector worth 98 billion baht, Gen Prayut said.

He took aim at the Pheu Thai government's loss-ridden rice-pledging programme, saying it imposed a heavy financial burden on the national budget.

"The rice scheme incurred a loss of more than 950 billion baht and the government has already set aside 780 billion baht to pay the debt, with another 300 billion baht in the principal amount plus interest still owed," Gen Prayut said. "Such huge sums could have been spent on many things," he added.