The opposition on Wednesday formally filed a motion of no-confidence against Prime Minister Prayut Chan-o-cha and 10 other cabinet ministers. 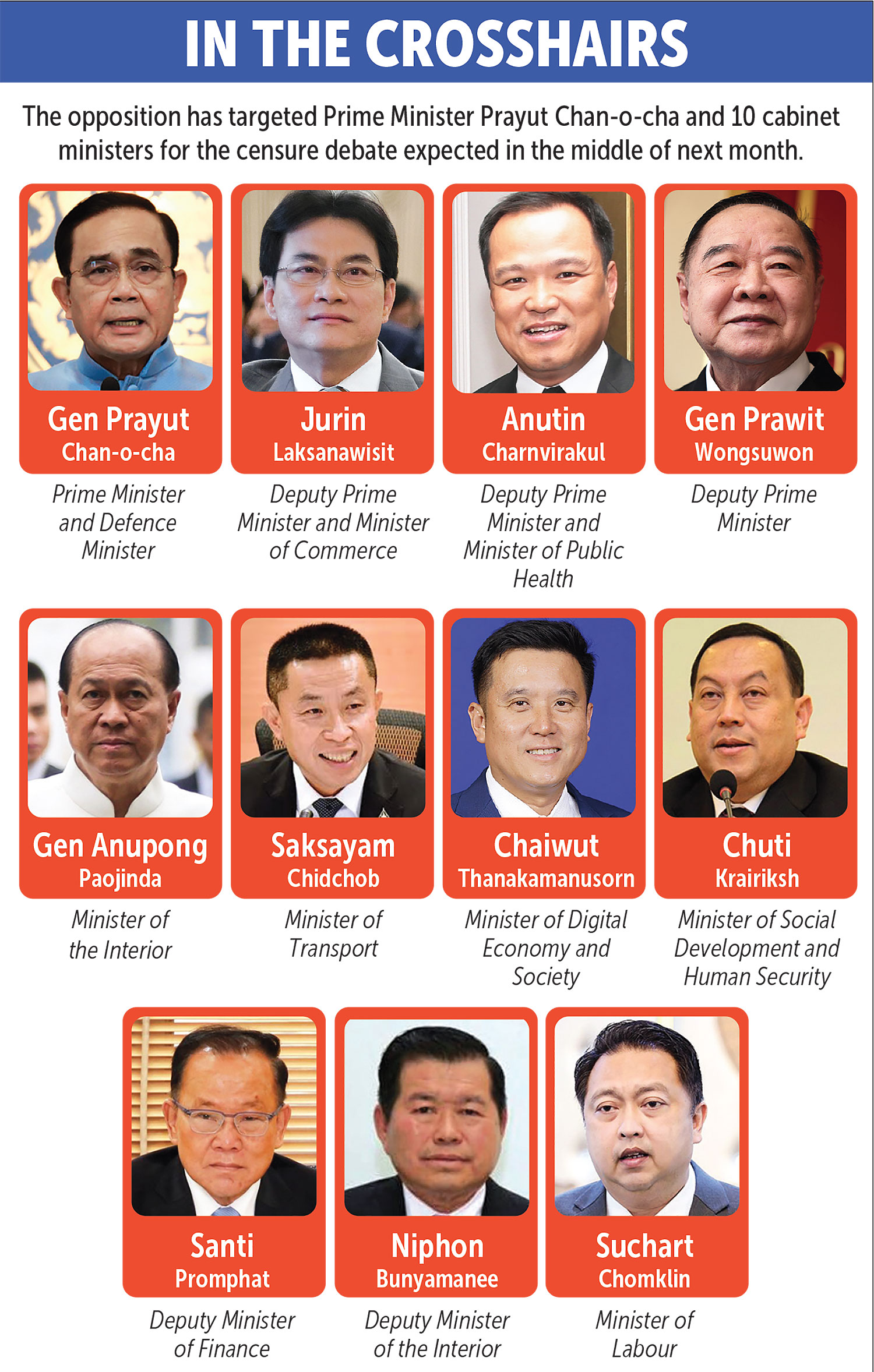 The motion for the censure debate under Section 151 of the constitution was submitted to House Speaker Chuan Leekpai by core members of the opposition led by Cholnan Srikaew, leader of the Pheu Thai Party.

Dr Cholnan said he expected the no-confidence debate to last five days, probably from July 18-22. It will be the last censure debate the opposition can initiate ahead of the expiry of the government's tenure in March next year.

In the motion, the prime minister is accused of incompetence in running the country and suffering from a "debilitated mind". He is also alleged to be addicted to power with utter disregard for the rule of law and moral ethics.

In particular, Gen Prayut is alleged to have spent the national budget without exercising fiscal discipline or any regard for burgeoning public debt. As defence minister, Gen Prayut is also accused of approving the defence budget when the country was faced with an economic downturn.

Other allegations against the premier include allowing cronies to engage in widespread graft.

As for Mr Jurin, the motion accused him of permitting consumer prices to soar unchecked, disrupting people's livelihoods and businesses.

With Mr Anutin, the censure allegations centre on complicity in offering cash and in-kind benefits to lure MPs from other parties to the coalition Bhumjaithai Party which he leads.

Turning to Gen Prawit, the motion accuses him of lacking honesty and avoiding the anti-corruption law. When graft is discovered, he allegedly not only failed to tackle it but protected those who committed the malpractices. A similar allegation was also levelled against Gen Anupong.

For Mr Saksayam, the censure accusation has to do with his alleged interference in officials' work at the Transport Ministry, and catering to vested interests.

Mr Chaiwut stands accused of dereliction of duty causing technology crimes to flourish, damaging the economy and people's way of life. He is also alleged to have used the cyber law as tool to suppress dissent against the government.

The motion also attacks Mr Chuti for disbursing government budget for the vested interests of cronies and himself.

In Mr Santi's case, the censure allegations include his alleged links to graft and allowing malpractice to be carried out in state agencies under his supervision. As for Mr Niphon, he is alleged to have failed to stop graft in agencies he supervises.

With Mr Suchart, the minister is accused of having solicited ill-gotten gains from imports of migrant workers and worked for the benefit of large businesses which illegally use foreign labourers.