Analysis: Some of its MPs may quit as leader is seen as self-interested

Some are asking what if any role the Setthakij Thai Party led by Thamanat Prompow can play in overthrowing the government in the upcoming no-confidence debate.

Setthakij Thai, with 16 MPs under its wing, has raised the political temperature after Capt Thamanat on Tuesday formally withdrew support from the coalition and vowed to vote against Prime Minister Prayut Chan-o-cha and 10 cabinet ministers targeted in the censure motion.

However, political analysts doubt that all the MPs will follow Capt Thamanat's lead and vote against the government and they tend to agree that the former secretary-general of the ruling Palang Pracharath Party (PPRP) is running out of political luck.

Wanwichit Boonprong, a political science lecturer at Rangsit University, sees Capt Thamanat's move as an attempt to stay in the game after the party's election defeat in the by-election in Lampang's Constituency 4 on Sunday. 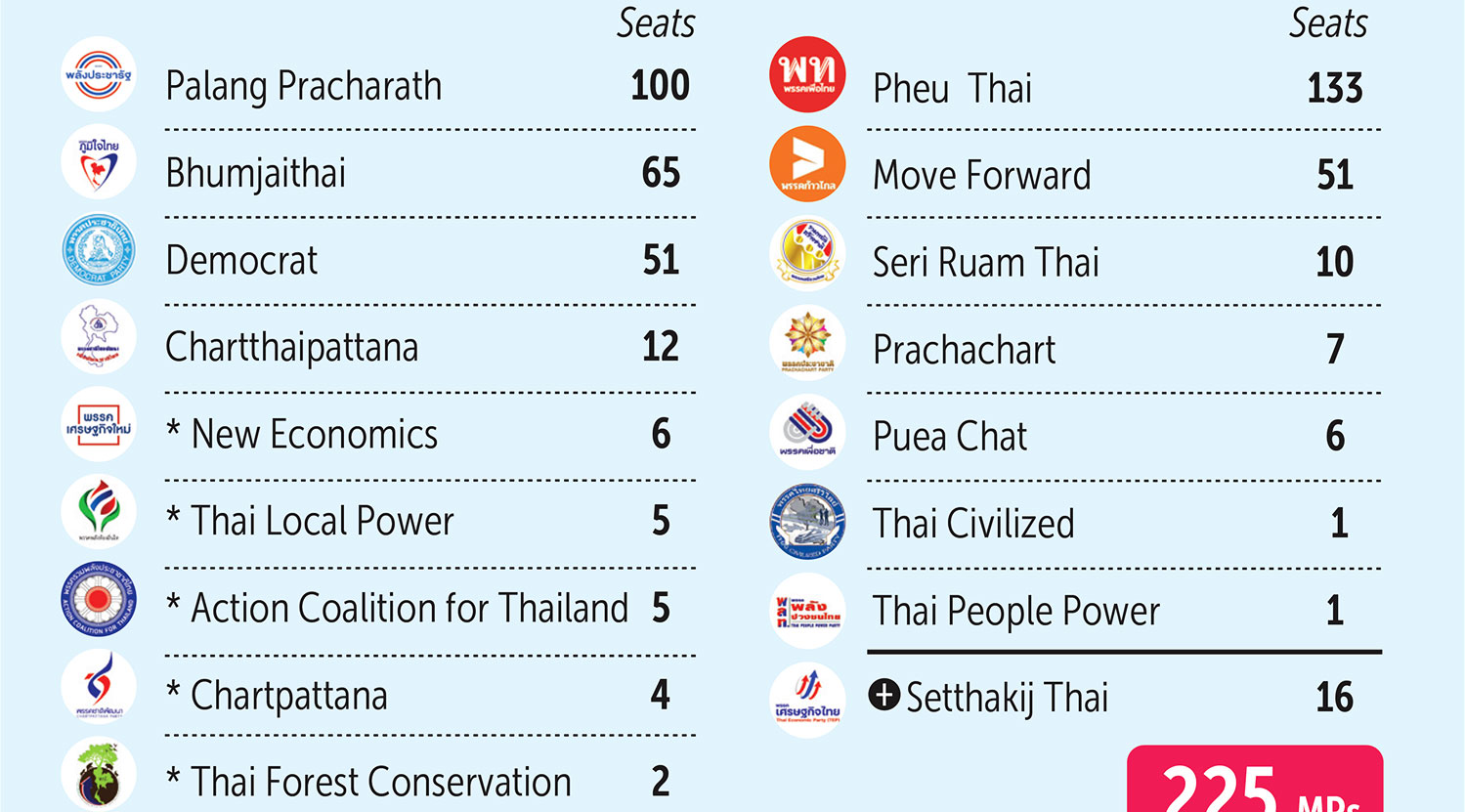 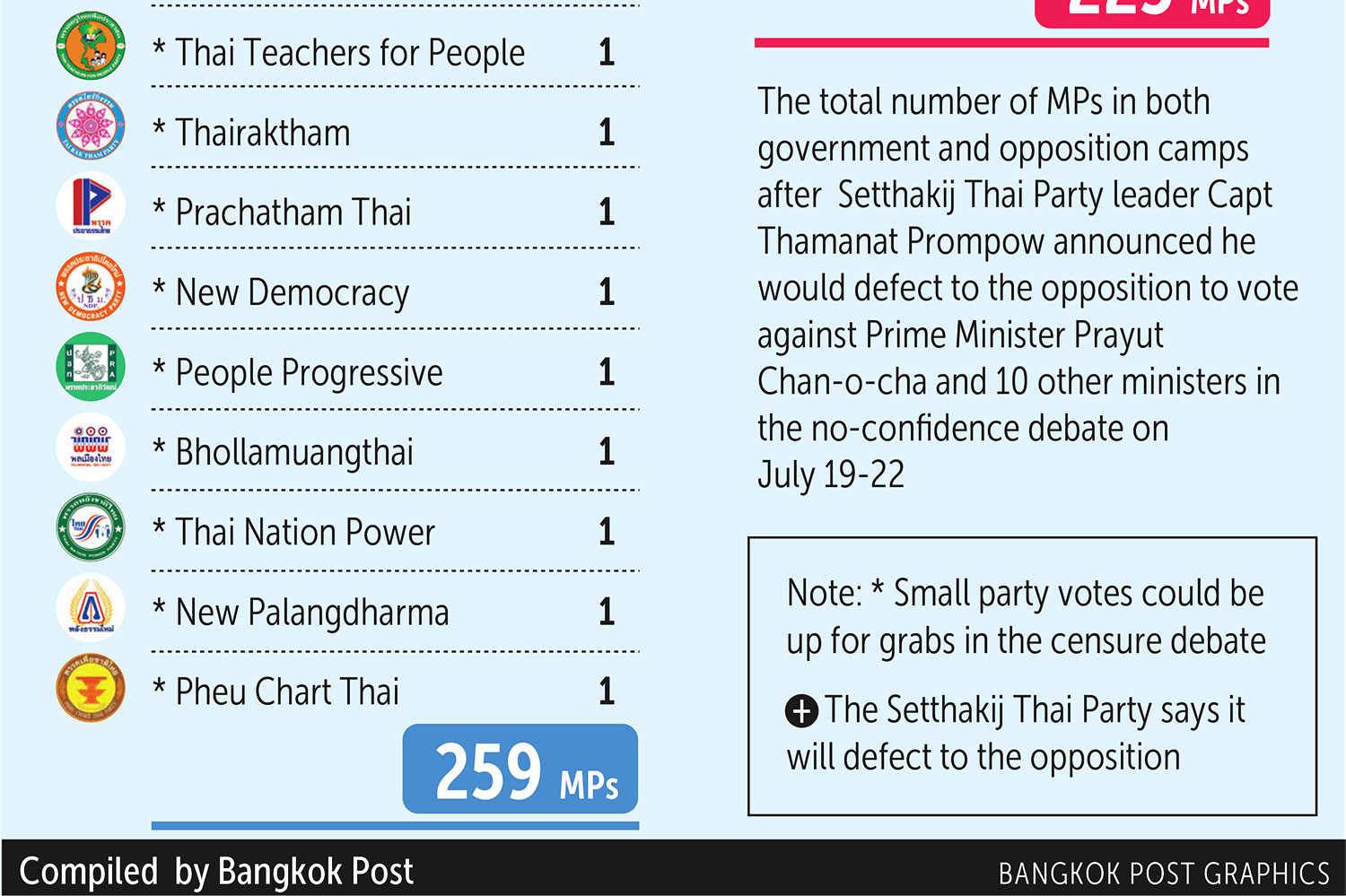 He said Setthakij Thai's loss to a candidate from the Seri Ruam Thai Party, which is in the opposition camp, shows the party's influence is under serious threat.

"The role he has played -- not supporting Gen Prayut while rooting for Gen Prawit [leader of the PPRP] -- makes others see him as looking to drive a bargain. If he continues with this approach, he stands no chance in the next election," Mr Wanwichit said.

Capt Thamanat does not have many alternatives. He cannot return to the PPRP and if he chooses to go back to the Pheu Thai Party, he will be close to the bottom rung. The method of calculating party-list votes likely to be adopted at the next poll is also believed to drive Capt Thamanat.

Mr Wanwichit said the Setthakij Thai leader is taking a big gamble on his political future and there is no guarantee the MPs under Setthakij Thai will all vote as instructed.

"If he [Capt Thamanat] can undermine government stability in the upcoming censure debate, his party may be able to join the opposition camp," he said.

Olarn Thinbangtiew, a political scientist from Burapha University, said the Setthakij Thai leader is trying to stay relevant and he has lost most of his political credibility.

He said it is no secret that Setthakij Thai was a nominee party set up by Gen Prawit to manage political conflicts or crises. It has no connections with voters.

The party is accused of being bent on political bargaining rather than being interested in producing substantive policies. "His [Capt Thamanat's] actions have made him lose political credibility and it could be his own idea and nothing to do with the other MPs.

"These MPs had other reasons when they defected from the PPRP. I don't think they want to sink with Capt Thamanat and may defect to other parties or return to the PPRP," Mr Olarn said.

Yuttaporn Issarachai, a lecturer at the School of Political Science of Sukhothai Thammathirat Open University, said the government faces a raft of problems, so Capt Thamanat decided to use the by-election defeat in Lampang to turn the situation to his favour. 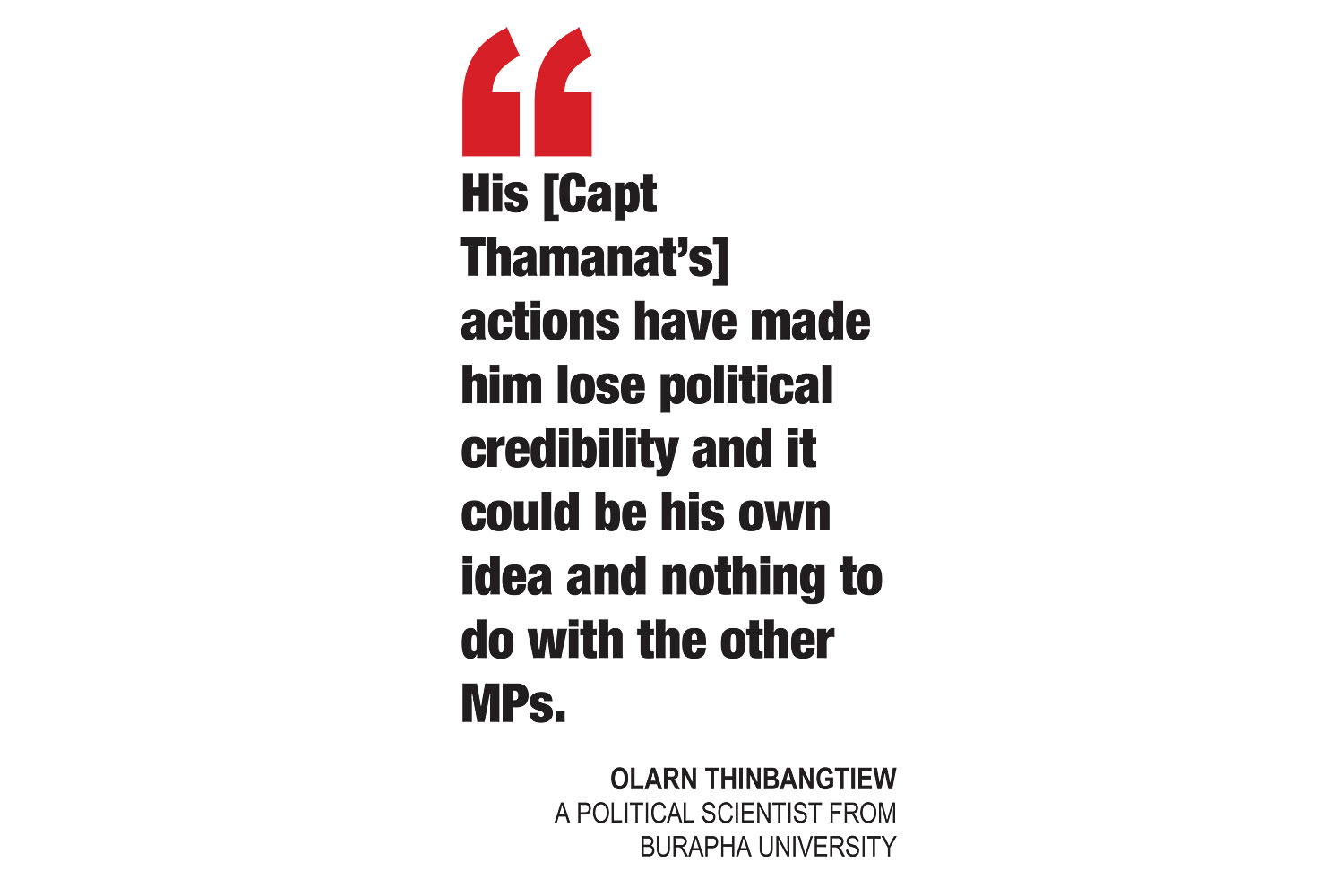 He added the move is unlikely to be driven by any ideology.

Mr Yuttaporn said he does not believe all Setthakij Thai MPs will take their cue from Capt Thamanat in the no-confidence debate taking place on July 19-22.

"Setthakij Thai has more than 10 votes in the bag, so we have a reason to worry. The government's majority is as thin as it is. But it is still a majority," he said.

Deputy Pheu Thai leader and chief opposition whip Sutin Klungsang said Setthakij Thai would be judged by the people for its actions and it would be accepted if it kept its word.

He said preparations for the censure debate have been finalised but the opposition bloc could make room for Setthakij Thai if it wanted to grill the ministers. However, Mr Sutin conceded he did not think the opposition could muster sufficient votes to oust the government.

Move Forward Party MP Rangsiman Rome said that while Setthakij Thai would need time to prove itself, how the party cast its vote at the end of the censure debate would determine if it is sincere in joining the opposition.

Micro-coalition parties will decide if they too will withdraw support and are expected to meet the PPRP leader on Sunday, said New Democracy Party leader Suratin Picharn. Mr Suratin said if three minnow parties follow Capt Thamanat's lead the government will be a minority in the House.

Capt Thamanat said he has explained his withdrawal from the government to Gen Prawit and the PPRP leader understood the situation. "The talk wasn't about the censure debate. It's about why the party switched to the opposition," he said.

Capt Thamanat did not rule out the possibility of returning to Pheu Thai, saying in politics anything was possible.