With more people vying to be premier and the PPRP's fortunes waning, Gen Prayut's future at next polls is far from certain | The charter court is asked to rule on when the PM's tenure began with debate raging on three possible dates

Within the span of a few weeks, the country has learned of two potential prime ministerial nominations being uttered straight from the horses' mouths.

One came from Pirapan Salirathavibhaga, the newly elected leader of the Ruam Thai Sang Chart Party, and the other from Anutin Charnvirakul, leader of the coalition Bhumjaithai Party.

Their announcements had been anticipated as the momentum steadily builds for the next election.

Announcing a prime ministerial nomination can be either advantageous or not for pre-election leverage for a political party. Parties with a shot at gaining enough House seats to qualify to nominate a prime ministerial candidate know how to play their cards right.

First and foremost, a potential candidate must be a "bankable" name in politics or a strong aspirant with more than a solid professional background, whose track record is unblemished.

But if they lack all that, the shortcut to candidacy is through immense support they garner from a major political party or parties, according to observers.

Ideally, they should be a party leader and its final decision maker, with whom the buck stops.

However, in the previous election in 2019, Gen Prayut was hailed by the Palang Pracharath Party (PPRP) and put on a pedestal to be its lone prime ministerial candidate. Gen Prayut's nomination was intended to carry over his premiership from when he was first installed as prime minister three months after the National Council for Peace and Order coup ousted the Pheu Thai Party-led administration.

At the next election, expected in the middle of next year -- if the government lasts that long -- Gen Prayut might seek office again, although the plentiful political support he enjoyed back in 2019 might be a lot harder to come by this time around, the observers said.

Prior to the previous election, the PPRP had been fresh off the blocks, drawing in defectors from major parties, many of them from Pheu Thai. Dubbed old wine in a new bottle, it managed to finish second in terms of the number of seats it captured, after Pheu Thai.

The PPRP had been heavily predicted even before the last ballots were cast in the election that it would eventually lead the effort to form a government and emerge as the ruling party.

The potential coalition partners at the time, including Bhumjaithai and the Democrats, which also nominated their own prime ministerial candidates, were believed to have less chance of having their candidates become prime minister.

The spotlight was all on Gen Prayut and remained on him throughout the nomination process.

However, an analyst says the dynamics in the build-up to the next election have shifted from both the PPRP and Gen Prayut, dictated by changes in political landscape.

Pheu Thai, which is aiming for a landslide victory, has been predicted to gain no fewer than the 136 seats it won the last time, while its ally, the Move Forward Party, which has made some inroads into local administrative organisation memberships, could collect more constituency seats and expand.

The race looks set to intensify for coalition parties that are under pressure to win more seats. Suffering deep internal divisions, the PPRP is languishing while Gen Prayut's popularity has plummeted.

The analyst said Ruam Thai Sang Chart has been born at the precise moment when the PPRP begins its walk into the sunset. Even though it has vehemently denied it is the PPRP's "spare part", several politicians have jumped ship from the ruling party and joined Ruam Thai Sang Chart which recently elected Mr Pirapan as its leader.

Mr Pirapan did not shy away from declaring his intention to lead the country if his party wins enough seats and is in charge of forming the next government.

Around the same time Mr Pirapan announced premiership intentions, a similar message also came from Bhumjaithai. Mr Anutin told a crowd in Lop Buri where he unveiled a potential Bhumjaithai election candidate that he would be nominated as the party's only prime ministerial candidate.

Both announcements came as more politicians quit the PPRP and defected to Ruam Thai Sang Chart and Bhumjaithai.

The question on everyone's lips was whether Gen Prayut was being ditched as a prime ministerial candidate by Ruam Thai Sang Chart and Bhumjaithai. One party is free to vote for another party's candidate to be prime minister.

Who will be the "real deal" prime ministerial candidate in the next poll between those representing Ruam Thai Sang Chart, Bhumjaithai and the PPRP remains a mystery. However, the analyst said Mr Anutin cannot be overlooked as Bhumjaithai has expanded from having 51 MPs after the 2019 election to more than 60 now. It also considers many constituencies, particularly in the Northeast, among its strongholds and is tapping into more.

Ruam Thai Sang Chart must race against time to establish itself as a political force whereas the PPRP may be relegated to the third or even fourth largest party in the next polls.

As a certain date approaches, people are wondering the same thing: How much longer can Prime Minister Prayut Chan-o-cha stay in office before he reaches his eight-year term limit? 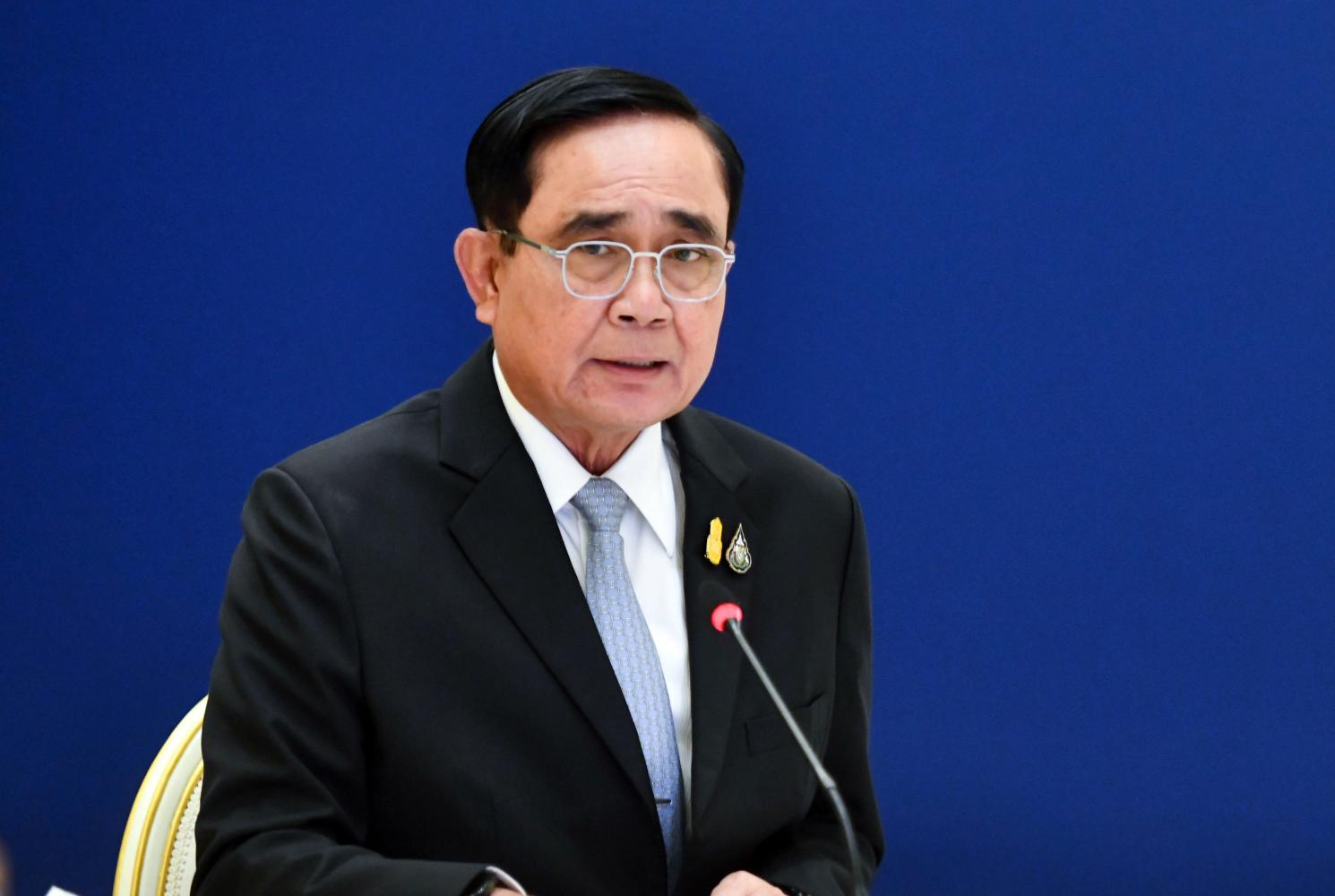 Section 158 of the 2017 charter limits a prime minister's term to eight years, whether those years are consecutive or not, to prevent someone from staying in power too long.

On Aug 24, Gen Prayut will have been in the post for a full eight years.

Gen Prayut and his allies have remained tight-lipped about the term limit and urged people to withhold judgement until the Constitutional Court rules on the issue.

"Please listen to what the court has to say. Don't rush to interpret the charter on your own and without sufficient understanding," said government spokesman Thanakorn Wangboonkongchana earlier this month.

But that cannot silence the questions about the expiry of Gen Prayut's premiership as legal experts are divided over when his tenure ends. They have come up with three potential dates, and that is because they see the start of his tenure differently.

Those who believe it started in August 2014 -- when Gen Prayut first became prime minister after the May 2014 coup, insist Gen Prayut will reach the limit in the next few days.

This group includes 51 law professors who this week submitted an open letter to the Constitutional Court explaining why Gen Prayut's term should end this month.

Their key argument is that since the limit was introduced to prevent the hogging of power and a political crisis, it should be retroactively applied to Gen Prayut.

Another group claims that Gen Prayut can stay much longer because the clock on his premiership began ticking when he was appointed prime minister under the 2017 charter in June 2019.

Among those who subscribe to this claim is a House of Representatives legal team who determined months ago that Gen Prayut's term technically began on June 9, 2019. His current four-year term will end in March next year and he can serve another four-year term.

However, the third group argues that the count started in April 2017 when the current charter was promulgated, so after completing his term next year, Gen Prayut can serve another term until 2025.

The last two groups say there is much more to Section 158 than the eight-year limit.

Paragraph 2 of the section states that the prime minister must be endorsed by members of parliament under Section 159. In their opinion, the term limit is rather meant for post-coup prime ministers, so it should not apply to Gen Prayut's premiership before the 2019 general election.

While many observers prefer to adopt a wait-and-see approach as they believe all three scenarios are plausible, Stithorn Thananithichote, an analyst at King Prajadhipok's Institute, has ruled out the first one.

He is confident that Gen Prayut will continue serving as prime minister until March next year when the government's term ends, considering previous rulings by the Constitutional Court.

"His term limit may be reached in either 2025 or 2027. Definitely, the count on his premiership didn't start in 2014 if we look at other rulings as a guideline," said Mr Stithorn.

However, the fuss surrounding Gen Prayut's tenure should end soon, now that at least three petitions on the matter have been initiated.

The first was lodged early this month by activist Srisuwan Janya who asked the Office of the Ombudsman and the Election Commission to seek a judicial review on the matter.

The second came from Mongkolkit Suksintharanon, leader of the Thai Civilized Party, who submitted it directly to the court on Aug 15, two days before the latest was submitted by the opposition bloc via parliament president Chuan Leekpai under Section 82 of the constitution.

Both Mr Mongkolkit's and the opposition's petitions also asked for the charter court to suspend Gen Prayut as prime minister starting on Aug 24 to prevent legal complications and damage arising from his carrying on beyond his term.