Judges to review statements this week

The Constitutional Court will hold a special meeting on Thursday to examine statements given by suspended Prime Minister Prayut Chan-o-cha and former charter drafters over the dispute related to the limit on his eight-year tenure.

A source at the court said that the court's president, Worawit Kangsasitiam, has already received separate statements from Gen Prayut, Meechai Ruchupan, former chairman of the 2017 charter drafting committee, and Pakorn Nilprapun, former secretary to the committee.

Last Thursday, a team of legal advisers to Gen Prayut submitted a statement in response to the court's suspension order, arguing that the starting date of his tenure was not Aug 24, 2014.

The Constitutional Court decided on Aug 24 to suspend Gen Prayut as prime minister until it hands down its ruling on his term limit.

The suspension order followed the court's decision to accept an opposition petition asking it to rule on Gen Prayut's eight-year tenure. The petition was signed by 171 MPs from the opposition bloc.

Previously, the opposition cited the minutes of a Sept 7, 2018 meeting attended by a charter drafting committee to support the view that Gen Prayut's maximum eight-year tenure ended last month.

According to an excerpt from the document, Meechai Ruchupan, chairman of the 2017 charter drafting committee, said the eight-year tenure of a PM in office before the charter should span both the time before it came into effect and the period after, if the same premier served again after the new constitution was put in place.

Meanwhile, Gen Prawit on Monday denied speculation about a cabinet reshuffle after Niphon Bunyamanee, a deputy leader of the Democrat Party, resigned as deputy interior minister to fight a court case for alleged malfeasance while he was president of the Songkhla provincial administration organisation in 2013. His resignation has brought the number of cabinet seats now left vacant to four.

On Aug 26, the Supreme Court suspended Deputy Education Minister Kanokwan Vilawan of the Bhumjaithai Party from performing her duties after accepting a petition accusing her of serious ethical misconduct in a land encroachment case. 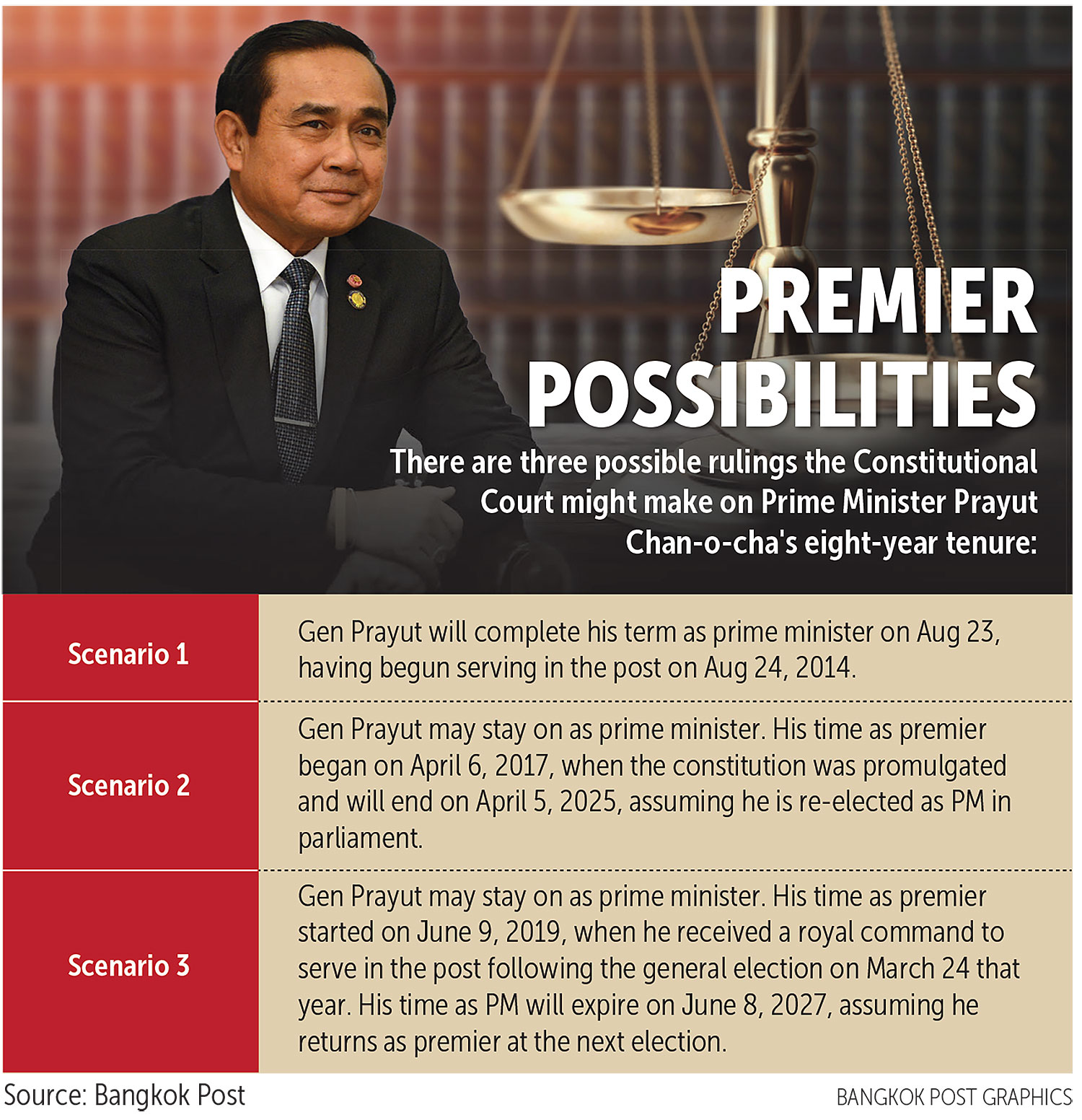 In September last year, Gen Prayut sacked the then deputy agriculture minister Capt Thamanat Prompow and the then deputy labour minister Narumon Pinyosinwat from the cabinet. The two cabinet posts were part of the ruling Palang Pracharath Party's (PPRP) quota.

Gen Prawit said on Monday that he only serves as acting prime minister and has no authority to reshuffle the cabinet.

Chief government whip Nirote Sunthornlekha on Monday denied a report that some MPs of the PPRP were calling on Gen Prawit to reshuffle the cabinet and reclaim the cabinet portfolio held by Mr Niphon.

Deputy Prime Minister and Democrat leader Jurin Laksanawisit on Monday insisted that the quota of cabinet seats for the Democrats remains unchanged and said that the authority to make changes in the cabinet lies with the prime minister.

"There are no signs of any cabinet reshuffle. The Democrats will still carry on as part of the coalition government," Mr Jurin said.

Small parties on Monday indicated they did not want any cabinet seats following Mr Niphon's resignation. Peerawit Ruangluedolphak, a list MP and leader of the Thai Rak Tham Party, said it is up to Gen Prawit to decide.