Time to walk the talk

ABOUT POLITICS: Calls are already growing for the Bangkok governor to start delivering on election pledges v Withdrawal of Bhumjaithai's cannabis bill may have felt like a stab in the back but with polls looming the party seems to be swallowing its pride

The report card is out on Bangkok governor Chadchart Sittipunt upon having served his first three months in office and it does not look terribly flattering.

Mr Chadchart, elected governor with a whopping 1.3 million votes on May 22, has enjoyed a small honeymoon period, despite the avalanche of support from city residents wooed by his promise of a more liveable Bangkok, greater administrative openness and political impartiality.

He produced 200-plus mantras contained in a guidebook of tasks to be fulfilled, which are to be adopted by City Hall officials at all levels.

As the days wear on, public expectations are growing that the governor will accomplish at least some of the tasks that were central to his election campaign promises.

Critics have had a field day taking aim at the governor over his preoccupation with live-streaming his inspections of city problems and not getting down to the nitty-gritty of tackling them.

Observers said opinions were split on assessing Mr Chadchart as Bangkok governor. Some could not be more brutally honest about how they think he has fared in the top job at City Hall in the past three months.

One vocal critic, Asdang Yommanak, reminded Mr Chadchart in a satirical tone of how words can be one's boss once they have been uttered.

"It will definitely be better, at least 50% better. If that cannot be achieved, there is no point in becoming the governor," Mr Chadchart said in a short video clip when talking about the flooding ravaging many parts of Bangkok.

Pavin Chachavalpongpun, an exiled Thai lecturer at Kyoto University in Japan, joined the fray, accusing Mr Chadchart of being receptive to sweet words but ignorant of criticism.

However, Saree Aongsomwang, secretary-general of the Foundation for Consumers, said the governor deserved a chance to prove his worth.

She praised him for being responsive to the voices of the people. Citing the high fares on the BTS Skytrain Green Line as an example, Ms Saree said the Bangkok Metropolitan Administration (BMA) wanted to set the maximum fare at 59 baht while the foundation proposed capping it at 44 baht.

Ms Saree said the government should subsidise public transport fares to encourage more people to use it. The BMA then reconsidered the proposed fares. Its council is expected to decide on the matter this month.

She said Bangkok is beset by a host of complex issues and since Mr Chadchart has been in office for less than four months, it was only fair that he be allowed more time to find his feet and start tackling the problems head-on.

However, one observer said that despite being elected, Bangkok governors answer to the interior minister who reserves the right to fire them. The governor shares his authority to oversee or implement city infrastructure projects with several state agencies.

However, the governor is the chief supervisor of City Hall which is being scrutinised over its allegedly dubious budget for organising seminars and conferences.

Atthawit Suwannapakdi, a former Bangkok MP and now secretary-general of the Kla Party, has requested a state audit to check planned budget spending on 72 seminar projects worth 111 million baht in the next fiscal year beginning next month.

He said no budget has ever been allocated for such projects, which were earmarked for 26 district offices, during the term of the previous governor, Pol Gen Aswin Kwanmuang, who was installed by the coup-maker National Council for Peace and Order.

Drawing a comparison to budgetary practice in parliament, he explained that under the current constitution, funds that make up an expenditure budget to be channelled to any state agency are subject to being trimmed.

However, once trimmed, an equal amount of funding must be set aside and diverted to the central coffers for the prime minister's use to battle national calamities or crises such as floods or a pandemic.

City Hall should do what is proper by cancelling the seminar fund and re-allocate it elsewhere immediately.

"If City Hall insists on going ahead with the current course of action, it faces the risk of running short of money to cope with crises that could hit Bangkok," he said.

Mr Atthawit said information about seminar funding was supplied to him by City Hall officials who were unhappy about the projects.

He added that one district office was poised to receive almost 10 million baht in seminar funding which dwarfs a 3-million-baht budget increment for installing a drainage system in the district.

Mr Atthawit insisted his petition for a state audit was not intended to pick fault with City Hall but help Mr Chadchart streamline its budgeting system so there is sufficient funding on hand for handling crises.

It's for the sake of upholding the governor's principle of achieving administrative transparency, the Kla secretary-general said.

Keeping up a brave face

The Bhumjaithai Party was recently caught off guard when a bill on cannabis and hemp, which was aimed at giving the government efficient control of the plant's use following its removal from the list of narcotic drugs, was withdrawn from deliberation. 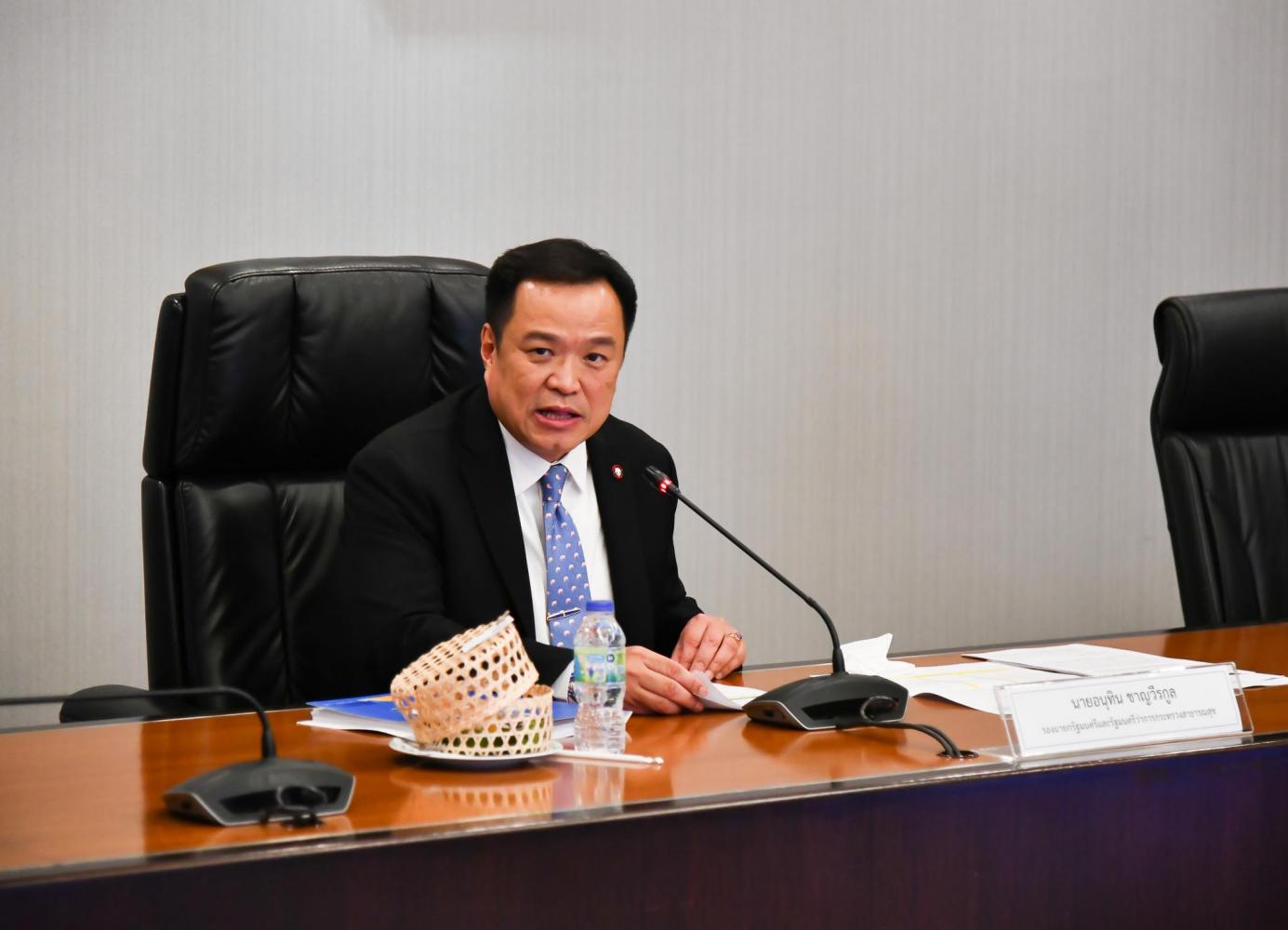 Anutin: No need to be 'kreng jai'

On Sept 14 the House of Representatives voted 198 to 136 with 12 abstentions to withdraw the bill for further additions despite objections from the party which sponsored it.

The bill was scheduled for its second and third readings that day after passing its first one in June.

Before deliberation started, some MPs asked if the bill could be withdrawn and sent back to the vetting committee for further review.

One reason was that the bill was extensively revised during the vetting process, making its essence different from the original version.

Another was that the bill's contents failed to guarantee full protection for vulnerable groups like youths and pregnant women since they were not adequate to prevent its misuse for recreational purposes.

The delisting was supposed to be purely for medical and research purposes.

He suggested it was a political game when asked if the bill would likely be passed before parliament's tenure ends next March. "Ask those who have delayed it ... It is obvious how the political game is playing out."

The Bhumjaithai leader was also quoted as saying that the party saw no need to observe any political etiquette in the months before the government's tenure officially ends and the election contest is officially on.

"Well, it's probably good that things have turned out this way -- you can't count on support from coalition partners. The election is coming, so there is no need for us to hold back and be kreng jai [considerate] about everything," he was quoted as saying.

The move to withdraw the bill might not have upset Mr Anutin that much had it not been spearheaded by the Democrat Party, its coalition partner, according to observers.

It was Democrat MP for Trang, Satit Wongnongtaey, who pointed to the shortcomings of the bill and called for a vote on whether deliberation should proceed after the vetting panel headed by Bhumjathai list MP Supachai Jaisamut refused to pull the bill for further review.

Some observers viewed this development as a political struggle ahead of the next general election which is expected to take place in the first half of next year provided the government completes its four-year term in March.

Before the 2019 poll, Bhumjaithai promised to decriminalise cannabis for medicinal and economic reasons and eventually made good on its promise when the plant was removed from the country's narcotic drugs list on June 9 this year.

The party is expected to capitalise on this policy in the next poll and the bill is expected to deflect any criticism amid growing concerns about the recreational use of the plant and the impacts it has on people's health.

With the two coalition parties locking horns, some observers wonder if the issue can escalate and destabilise the government.

Liberalisation of cannabis is Bhumjaithai's flagship policy, and the Democrat move may be serious enough to warrant Bhumjaithai pulling out of the coalition government.

However, with just six months to go before the government term ends, most analysts find it improbable that Bhumjaithai or any coalition party will leave the government. Unless the government is hit by a very bad crisis, they will hang tight and seek full advantages in the lead-up to the poll.

Mr Anutin has already clarified the party's stance, saying the Democrat move gave the party no reason to leave the coalition and this would remain true even if the cannabis bill is not passed by parliament in the third and final reading.

"If it does not pass, it is a collective decision. The party will not withdraw from the government because the next election is approaching," he was quoted as saying.

The bill on cannabis and hemp law has a second chance, according to observers.

If the vetting committee decides to compromise and make changes to address concerns raised by MPs, it is possible that the bill will pass its second and third readings when the House reconvenes in November.

If it does not, another showdown will loom, provided that Prime Minister Prayut Chan-o-cha, who faces a ruling on his eight-year term limit on Sept 30, continues to serve and there is no change in the government.