Spectre of the Senate
Thailand
Politics

Spectre of the Senate

With the Upper House again likely to play key role in choosing a PM, who its members will pick isn't as clear-cut this time  v  PPRP could be edging towards a Pheu Thai deal as party leader Prawit and brother-in-arms Prayut seemingly drift apart.

Theories, analyses and predictions about the next election vary, although they concur on the inevitable role of the Senate in co-electing a post-poll prime minister.

No conceivable scenario has been painted, which envisages a single party or a coalition coming close to single-handedly or collectively cobbling together at least 376 House seats to form the next government.

The magic number marks the threshold a party or parties must cross for an outright majority of the combined 750 seats of the two Houses.

Such a majority is needed by a party or parties to successfully elect a prime ministerial candidate if they wish to keep the Senate out of the PM election process in parliament. Anything below the threshold will require the Senate to step in and join MPs in electing a premier.

For many analysts, it is not a question of if but when the Senate will be drawn into the co-election process as they believe no party or a single bloc of MPs alone can muster enough support to select a prime minister from among the candidates.

Any political party winning at least 25 House seats is eligible to nominate up to three prime ministerial candidates.

The ground rule here is whatever parties support a successful candidate to be prime minister will be part of the next coalition, assuming no single party can win at least 376 seats on its own.

The chances are the Senate will be brought in on the prime ministerial vote. In other words, senators will be co-deciders on the next prime minister and coalition government.

It is not the first time the Senate has done this. In the aftermath of the 2019 general election, Pheu Thai, which garnered most House seats, tried in vain to form a coalition just as the other side, led by the second-biggest Palang Pracharath Party (PPRP), was quietly waiting its turn to have a go.

Several weeks had passed without a breakthrough, prompting the PPRP to gather together the micro parties whose support allowed the PPRP-led bloc to achieve a parliamentary majority, although by a very thin margin.

But the critical moment that preceded the government's formation arrived when votes were called in parliament to pick a prime minister among candidates put up by parties qualified to nominate them.

Names dropped into the hat were Prime Minister Prayut Chan-o-cha nominated by the PPRP and Thanathorn Juangroongruangkit, leader of the now-defunct Future Forward Party (FFP).

Pheu Thai sprang a surprise when it overlooked its own prime ministerial candidates -- Khunying Sudarat Keyuraphan, Chatchart Sittipunt and Chaikasem Nitisiri -- and proceeded to back Mr Thanathorn. The party faced a backlash apparently for having no confidence in its own candidates making the cut.

As predicted, the winner was Gen Prayut. It was noted he was overwhelmingly supported by the senators who were hand-picked by the coup-engineering National Council for Peace and Order (NCPO), which was dissolved at the onset of the current government's tenure.

Critics said there was no breaking ranks or betrayal of loyalty in the selection by the Senate.

Looking at the next election slated for May 7, some political watchers have cast doubt over whether the Senate will remain as united this time around.

Paisal Puechmongkol, a former adviser to Deputy Prime Minister and PPRP leader Gen Prawit Wongsuwon, said the next government would likely be made up of the biggest parties speculated to emerge from the election -- Pheu Thai, Bhumjaithai and the PPRP.

Of the 250 senators, at least 50 back Gen Prayut and more than 100 are believed to favour Gen Prawit, Mr Paisal said.

If Gen Prayut and Gen Prawit -- strongly bound by their fraternal ties harking back to their long years of military service together -- were separately nominated for prime minister, they would split the Senate and undercut the Upper House's support for each other, which in turn could diminish Gen Prayut's chances of resuming office, he said.

Gen Prayut is expected to be nominated by the United Thai Nation (UTN) Party, after turning his back on the PPRP.

Also, the UTN, being a newly established party with a question mark hanging over the strength of its electoral base, might struggle to pull in at least 25 seats, according to Mr Paisal.

However, Senator Somchai Swangkarn has suggested anyone thinking the Senate was divided over their support for either Gen Prayut and Gen Prawit was "delusional".

He said it was easy for some who have spoken to one or two senators to become misguided and believe the few views they obtained reflected the stance of the entire Senate.

Mr Somchai insisted senators were unified in selecting a prime minister put up by a party who would serve in the best interests of the nation. However, the door would be shut on the Senate in the prime ministerial selection if a party or parties could come up with sufficient support in the Lower House to vote one into office.

A shift in alliances?

The past week has seen Deputy Prime Minister and Palang Pracharath Party (PPRP) leader Prawit Wongsuwon in the spotlight, with political analysts trying to have a complete understanding of his messages. 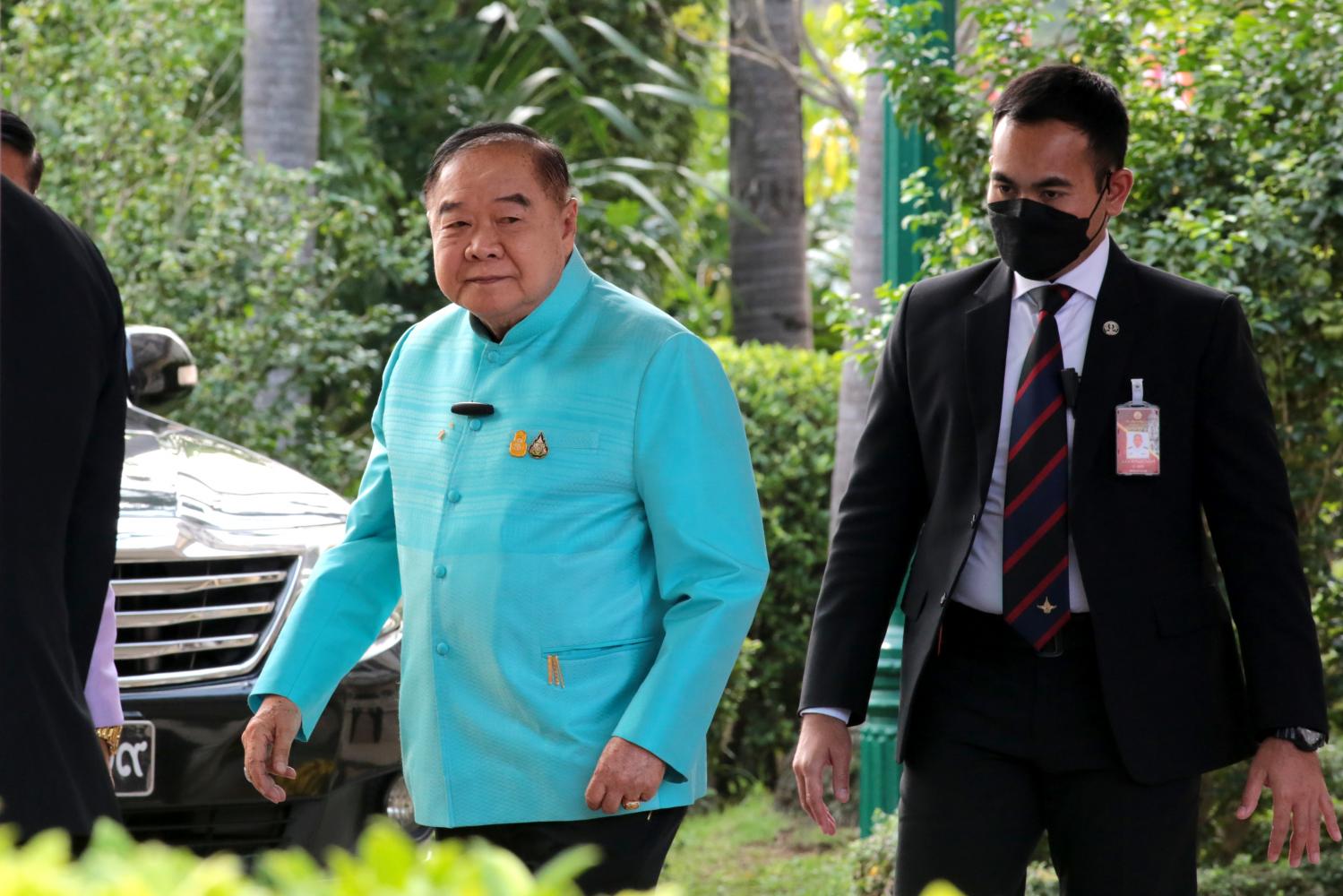 Prawit: 'Ready to work with all sides'

At a Tuesday press conference to unveil the party's campaign policies for the election due to take place in early May, Gen Prawit made some ears prick up when announcing the party was ready to work with all sides.

"We are ready to cooperate with all sides to find a solution [to conflicts] and steer the country towards the best possible goals. The country must be peaceful and prosperous," the PPRP leader said.

Resolving political conflicts is also part of the PPRP's election campaign slogan which roughly translates as "moving past conflict, solving all problems, and developing in every area".

To some observers, Gen Prawit's announcement lends weight to a rumour that the PPRP made a secret deal with the main opposition Pheu Thai Party and that both parties would join hands in forming the next government.

The talk about the alleged deal surfaced in August last year, around the time the list-MP calculation method was being reverted to using 100 as the divisor which was supported by the PPRP and Pheu Thai.

While there is no way to prove if the deal exits, political observers say Gen Prawit's remarks will at least clear the way for the PPRP to forge a post-election alliance with Pheu Thai.

However, scepticism remains over whether it will help the PPRP attract votes.

Yuttaporn Issrachai, a political science lecturer at Sukhothai Thammathirat Open University, doubted the PPRP's stance would draw voters but said the party needs it to stop bleeding MPs to other parties.

The latest party heavyweight to defect to the coalition partner is Veerakorn Khamprakob, a veteran politician based in Nakhon Sawan, who said he quit because the PPRP's popularity was waning.

Several more MPs are also expected to follow Prime Minister Prayut Chan-o-cha to the United Thai Nation (UTN) Party as soon as a House dissolution is announced. Speculation is now rife that it will take place after the current session closes on Feb 28.

Labour Minister Suchart Chomklin, a veteran politician from Chon Buri, is among the advance team at the UTN headed by Pirapan Salirathavibhaga, who also serves as the prime minister's secretary-general.

The PPRP's attempt to retain MPs to fight the election can also be seen in Gen Prawit's letter posted on his Facebook on Jan 13, a few days after Gen Prayut formally applied for UTN membership.

Gen Prawit assured party members that he would lead them in the next general election and they would emerge victorious after Gen Prayut turned his back on the PPRP.

Given the unusual step taken by Gen Prawit to use social media to communicate with party members and that certain words in the letter were deemed critical of Gen Prayut, critics who believe their relationship turned sour a while ago see it as the rift coming out in the open and a strong sign of both men drifting apart politically.

"As Gen Prayut expressed his desire to work in politics by claiming that he wanted to continue his mission and achieve it, I decided to form the PPRP and nominated Gen Prayut as the party's prime ministerial candidate, as he wished," wrote Gen Prawit.

The message reportedly irked Gen Prawit's advisers because they believed it ungentlemanly and going against principles brothers-in-arms adhere to -- one never kills his own brother, rats out a colleague, and sells out a friend.

According to a PPRP source, the ruling party faces situations that could spell trouble if not handled properly. One involves newcomers who defected from other parties.

While these defectors will boost the PPRP's election chances, what they are keen on now is to try to get close to Gen Prawit and win his trust, according to the source.

"They seek his trust so they are allocated more work, which means a bigger public relations budget. It's getting worrisome because Gen Prawit seems to listen to these people," said the source.