Leaders and representatives of all nine political parties in the parliament attended a lunchtime meeting on Friday to discuss ways to bring about national reconciliation, and all agreed that the lese majeste law should not be amended.

Matubhum leader Sonthi Boonyaratkalin, who is the chairman of the parliamentary reconciliation committee, invited all party leaders to a luncheon at the parliament.

"All party leaders are in agreement that the government should put any plan to amend the Criminal Code's Section 112 [the lese majeste law] on hold, because people see it as a sensitive issue," Gen Sonthi told reporters afterwards.

Pheu Thai leader Yongyuth Wichaidit  promised that no changes would be made to the law, he said. 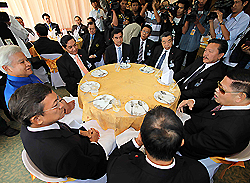 Gen Sonthi, who led a bloodless coup that toppled the Thaksin Shinawatra government on Sept 19, 2006, said all party leaders agreed that the constitution could be amended, but the changes must not touch on sensitive or ambiguous issues that benefit a particular group or individual.

The former national army chief said he will invite representatives from the army and the academic sector to contribute to the discussion.

However,  the discussions would not involve Privy Council president Prem Tinsulanonda or the judicial sector, since they were not the main parties in conflict.

Before the discussion started, reporters were asked to leave the meeting room.

Army chief Prayuth Chan-ocha said the meeting of all nine political parties was most welcome.

He said the army, as a unit of the government, would wait for the final decisions of the political branch.

"I have repeatedly said that there are three powers in the country - the administration, the legislative section and the justice system. All sides, including the armed forces, must join hands to move the country forward.

"All Thai people want national reconciliation as soon as possible. We must all rapidly ensure unity to bring   peace and security to the country," Gen Prayuth said.