Living in the ugly shadow of the kaeng sua ten dam

Out of the blue, Thailand's most controversial water project has come back to haunt Phrae villagers

For three decades, the spectre of the Kaeng Sua Ten dam has been haunting 59-year-old Seng Kwanyuen. Every time there is a flood threat to residents downstream in the Chao Phraya river basin, the plan to build the dam resurfaces like a giant shadow. 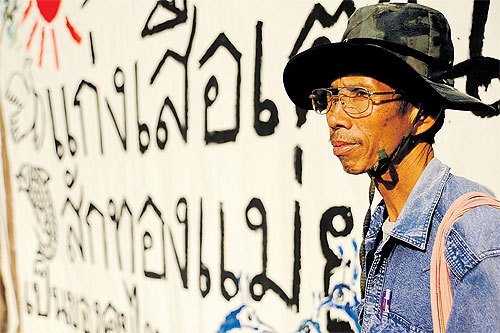 Mr Seng, a civil servant and kamnan of tambon Sa-iab in Phrae province, only learned the dam was back on the drawing board when government insiders informed him about the move.

''They have given us their word that they will not build the dam unless adequate studies are done. I just wonder how it has now become part of the government's flood mitigation plan,'' said Mr Seng, whose tambon would be flooded if the dam is built.

Two weeks ago, he jumped into a pickup truck along with other senior residents from his village to travel from his village deep in a teak forest to Chiang Mai province, where the cabinet was holding a meeting.

He wanted the residents' opposition to the dam to be heard by the new government.

The Sa-iab residents were greeted by government representatives but no assurance was given that the dam would not be built.

''I have no idea when this will end. I'm exhausted but I will not give up opposing it,'' Mr Seng said. 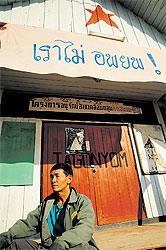 Narong Srikhampha, another long-time dam opponent, waits at the community’s meeting point and declares ‘we will not relocate anywhere.’ PHOTOS: PIYAPORN WONGRUANG

Since the dam plan was made public 29 years ago, lives in tambon Sa-iab have changed.

Residents of the tambon, which comprises 10 villages, have long lived close to one of the country's last teak forests and lived off its resources; ranging from mushrooms, ants' eggs, bamboo shoots and other vegetation.

The area was settled around 200 years ago and local beliefs are based on animism which influences the way they manage water resources and the forest.

But their bucolic lives were interrupted 90 years ago when logging concessions were first granted and Sa-iab forest started to disappear. In the late 1980s, Sa-iab residents established a forest conservation group, Rassadorn Rak Pa (Residents Love Forest), which managed to win restrictions on logging in their area. The teak forest gradually recovered.

But another threat to the forest emerged after a cabinet meeting in Chiang Mai in 1989 when construction of the Kaeng Sua Ten dam was proposed. It was the first time Sa-iab residents had learned about the dam with the message being passed on by environmentalists and student activists.

Just as they did two weeks ago, Mr Seng and residents from Sa-iab and some districts who would be forced to relocate because of the dam jumped into pickup trucks and headed to Chiang Mai to protest the project.

They won a minor victory when cabinet decided to reduce the dam's height from 90m to 72m.

In the ensuing years the protests continued in much the same vein with Mr Seng and his neighbours travelling across the country, even to Bangkok, to try and stop the dam. But the more they campaigned the more information about the project was withheld from them.

As their mistrust rose, Sa-iab residents began to cut themselves off from the outside world.

In the mid-1990s, they set up checkpoints and inspected vehicles and documents of those entering their villages without advance warning.

Tensions heightened dramatically when in mid-1994 officials from a World Bank delegation were attacked and injured when they tried to re-enter the village after earlier offering residents compensation that was rejected. Several residents were charged over the melee.

The campaign has not been without heavy personal cost. In the 1990s, Sa-iab residents faced financial hardship and criticism for being selfish in their resistance to the project.

The villagers claim they have been denied services by government agencies, including state-run hospitals, and their children have been bullied at school.

They effectively became a hermit community without reliance on the outside world. UNDER THREAT: The stunning teak forest that lies in the path of the planned dam construction site.

''We can say that Sa-iab during that period of time was isolated,'' Mr Seng said. ''We tried to live by our own, making a living from the forest, and tried not to go any where except when we were really sick and needed medical treatment.''

Eventually they received help from the Assembly of the Poor, which was originally formed to oppose the Pak Moon dam in the Northeast. With the help of the assembly, they managed to pressure the Chavalit government in the late 1990s to suspend the dam's construction pending further studies.

But based on past experiences, they were unwilling to trust the government. So they expanded their contacts with non-government organisations and academics and worked to put their children through university so that they could argue at an intellectual level. Mr Seng said some obtained master's degrees and most now work for local organisations. Mr Seng's niece, for instance, has graduated with a master's degree and is now working at the Mekong School as an advocate on forest conservation.

The residents themselves have also tried to explain their situation to people living downstream, especially in Sukhothai province, by inviting them to their villages and the teak forests so that they can witness first hand the value of the forest.

Now, at least 98 tambons along the Yom River are working together to monitor flood threats and keep each other informed, an approach which Mr Seng believes will help reduce the negative attitude against Sa-iab residents.

''We help monitor excessive water upstream and inform them immediately. We hope they appreciate our efforts,'' Mr Seng said.

Prasitthiporn Karn-ornsri, a former member of the Assembly of the Poor and now a coordinator of the Yom Basin Network, said the latest move by the government to list the Kaeng Sua Ten dam has demonstrated the same old problem of those in power dominating decision-making.

He urged the government to reconsider removing Kaeng Sua Ten from flood mitigation plans as it could not possibly retain enough water to significantly mitigate flooding downstream.

Mr Prasitthiporn said Sa-iab residents' alternative water management plan, which focuses on managing 77 small tributaries of the Yom River, can be used as an example by other river basin communities.