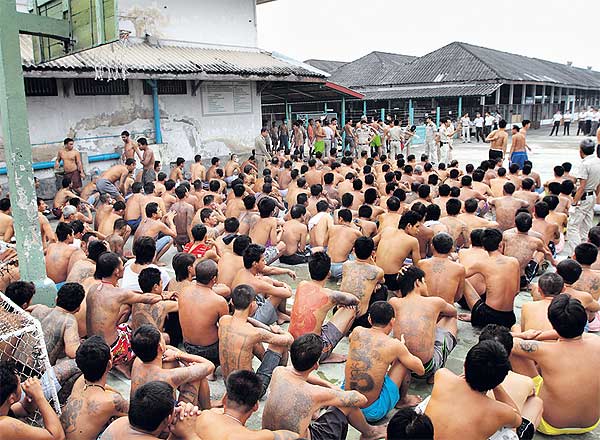 Inmates at Bang Kwang Central Prison in Nonthaburi gather in an open area as police, anti-drugs officials and jail wardens search their cells for illegal and prohibited items in a bid to stamp out the narcotics trade behind bars. PATIPAT JANTHONG

They seized 40,470 baht in cash, some crystal methamphetamine, or ya ice, 39 smuggled mobile phones, 20 sets of gambling paraphernalia and 27 items of pornography.

The raid was carried out jointly by 650 officers from Police Region 1 and Bang Kwang prison officials.

The prison has about 200 prisoners on death row and 1,300 others serving life imprisonment.

Prison chiefs who are unable to stamp out illicit drugs in their jails are being urged to seek transfers, Justice Minister Pracha Promnok suggested during a meeting with commanders of prisons across the country yesterday.

Pol Gen Pracha said the Corrections Department and the ministry would have no objection if prison chiefs who thought they could not rid their jails of illicit drugs decided to seek a transfer.

He stressed he would reward prison officials based mainly on their performance in suppressing drugs.

The minister said the government has made suppression a national agenda item and the drug problem must be tackled within one year.

He said the ministry had a clear policy to financially support the installation of high-tech security equipment in prisons that can locate and block mobile phone signals. The phones are used by some inmates to carry on dealing from inside.

He said all prisons must complete separating drug inmates known to have connections with drug rings from other inmates by next week. Those inmates would be transferred to Khao Bin Central Prison's special zone and nine other maximum security prisons equipped with high-tech security equipment.

Ministry spokesman Thirachai Wutthitham said the Corrections Department and the Office of the Narcotics Control Board would meet on Monday to finalise a list of drug inmates who would be moved to Khao Bin Central Prison in Ratchaburi.

Inmates who will be sent there still have connections with drug rings outside the prisons, he said.

The nine maximum security prisons would not allow relatives to bring in any items for the inmates, he said.

Meanwhile, the installation of mobile phone signal-jammers and CCTVs in inmates' cells will be completed in May. Visitors and prison staff will be subject to body searches while any vehicles entering the prisons will be checked.