Red shirt co-leader Jatuporn Prompan has claimed there could be a coup in April making it necessary for the red shirts to renew their mass protests to pre-empt any such attempt. 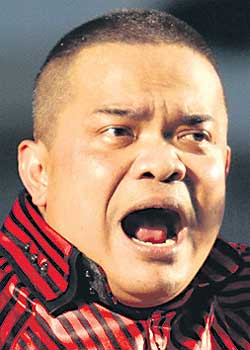 Jatuporn: Looking at a pre-emptive strike

Mr Jatuporn, a list MP for the ruling Pheu Thai Party, said yesterday that members of his United Front for Democracy against Dictatorship (UDD) and his associates who work with US intelligence told him there could be a coup d'etat which could bring about a change of government in April.

The UDD would move to prevent the coup. The group will stage a concert on Feb 25 and former prime minister Thaksin Shinawatra will speak to his supporters via a video call from abroad.

Mr Jatuporn said the gathering of red shirt supporters should discourage anyone who might be plotting a coup.

Nisit Sinthuphrai, another UDD leader, said the movement's leadership met in Nakhon Nayok two days ago and agreed that the present political situation could be the spark leading to a power revolt.

The UDD should stage anti-coup protests, he said, adding that red shirts should also press their demand for a charter rewrite.

He likened the planned Feb 25 concert to preparations for battle.

Meanwhile, Deputy Agriculture Minister Nattawut Saikuar said yesterday he has no plan to apologise to Privy Council president Prem Tinsulanonda over the UDD's past criticism of the statesman.

Mr Nattawut, a UDD core leader, said the organisation was launched as part of a quest for full democracy.

Mr Nattawut insisted he had no personal grievance against Gen Prem.

He said neither he nor Gen Prem expected an apology from one another. He said he saw no need to apologise because the issue at stake was the pursuit of democracy.

"But the people are waiting for national reconciliation to materialise, unity to be restored and democracy to be achieved," he said.

Gen Prem has accepted an invitation to preside over a party tomorrow to thank agencies involved in flood relief under the now-closed Flood Relief Operations Command (Froc).

Mr Nattawut said he will attend the party as a cabinet member, as it is an important event for the government. But he maintained he and Gen Prem had "no special agenda" to discuss during the party, and he did not want to be anyone's enemy.

The opposition has decried the party, saying it is in poor taste given that many people are still upset about the state's flood response last year, and still waiting for promised post-flood cash relief.