Sondhi sentenced to 20 years for fraud

Sondhi Limthongkul, a leader of the People's Alliance for Democracy and founder of the Manager Media Group, was sentenced to 20 years in jail yesterday for falsifying loan documents and fraud. 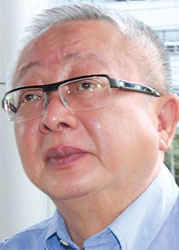 The Criminal Court found Mr Sondhi, 64, guilty on 17 counts of criminal and securities law violations for a total sentence of 85 years prison, later commuted to 20. He was released yesterday evening after posting bail of 10 million baht.

Also found guilty in the fraud conspiracy were three other former Manager directors: Suradet Muyangkoon, also a former president of International Engineering Plc; Saowalak Thiranujanyong and Yupin Chantana. All four pleaded guilty to the charges and received reduced sentences from the court.

In October 2000, the Securities and Exchange Commission accused Mr Sondhi and the three other Manager directors of falsifying loan guarantee documents to help secure a 1.08- billion-baht loan by the company from Krung Thai Bank.

The loan was arranged by The M Group, a private company controlled by Mr Sondhi and a major shareholder in the listed Manager Media Group.

The Manager Media Group was listed as a guarantor of the loan by Krung Thai to The M Group, with Mr Sondhi, Mr Suradet, Ms Saowalak and Ms Yupin, in their capacity as Manager directors, signing the guarantee document.

But the SEC said the Manager board was unaware of the transaction, which was also not disclosed in the listed company's financial statements. The M Group later defaulted on the Krung Thai Bank loan, resulting in Manager becoming liable for repayment and incurring damage worth 259 million baht as a result, according to the SEC.

The four also falsified documents to mislead Krung Thai Bank into thinking that the guarantee by Manager was properly authorised by the company board, and later colluded to prevent disclosure of the guarantee by the listed company to the Stock Exchange of Thailand.

The Criminal Court found Ms Saowalak guilty of 17 counts for violations of the 1992 Securities and Exchange Act and the Criminal Code, and sentenced her to 85 years' imprisonment. Mr Suradet received a five-year term for his actions, while Ms Yupin was sentenced to 65 years' jail on 13 counts. Sentences for all four were reduced after they confessed to the crimes.

Mr Sondhi built Manager Media into one of the country's largest media groups in the 1990s, but suffered huge losses in the wake of the 1997 economic crisis.

In 2005, Mr Sondhi used his ASTV satellite television channel to launch a public crusade against then-prime minister Thaksin Shinawatra, and became a leader of the yellow-shirt People's Alliance for Democracy (PAD) movement which mobilised tens of thousands of protesters against Thaksin in mid-2006.

The PAD, which dissolved after the September 2006 military coup which unseated Thaksin, regrouped in 2008 to protest against the Thaksin-aligned People Power Party (PPP) and then-premier Samak Sundaravej.

PAD protesters in late November of that year seized Suvarnabhumi and Don Mueang airports, with the protests ending on Dec 3 following the Constitution Court ruling to dissolve three coalition parties, including the ruling PPP.

Mr Sondhi was sentenced to three years in jail in 2007 for defaming Thaksin, and has been indicted on terrorism charges related to the blockades of the two airports.