Political skirmishes take to the airwaves

Satellite television has turned into a virtual political battleground as major political camps use the medium to attack their rivals. 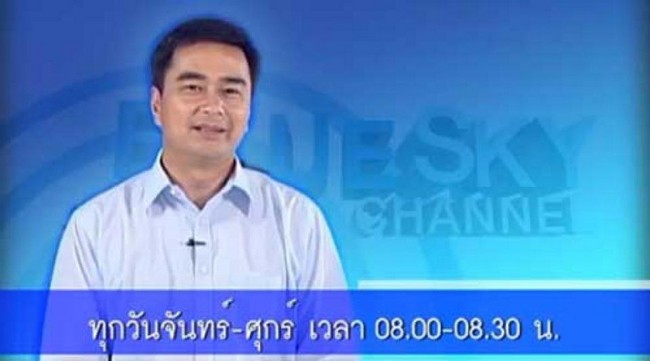 An advertisement on the Bluesky Channel tells of an upcoming interview with Opposition Leader Abhisit Vejjajiva.

Once dominated by entertainment programmes and commercials targeting low-income earners, satellite TV is now the first media outlet of choice for the Pheu Thai and Democrat parties as they stake out their positions in the colour-coded political fight.

Yellow shirt leader Sondhi Limthongkul was a pioneer in bringing a mass political movement to satellite TV when he launched the ASTV channel in 2003.

The channel has since become the base for the People's Alliance for Democracy to attack Thaksin Shinawatra and his cronies.

After the September 2006 coup, Thaksin supporters set up the People Channel to attack the coup makers.

The channel, also known as PTV, played a big role during the red shirt demonstrations two years ago but was shut down after the crackdowns on pro-Thaksin demonstrators on May 19, 2010.

Thaksin's supporters who are members of the red-shirt United Front for Democracy against Dictatorship (UDD) form the majority of its audience and politicians and former politicians under Thaksin's control are its commentators.

The Democrat Party was heavily attacked by the pro-red shirt satellite TV channel during the Abhisit Vejjajiva government.

In 2010, Suthep Thaugsuban, then the Democrat secretary-general and government manager, announced Democrat supporters would found a satellite TV channel to vie with the red-shirt channel.

The plan did not come about right away because the Democrat Party was still ruling the country and running the state-owned media.

It resumed when the party lost the past election and left the national administration.

The channel calls itself Blue Sky, after the Democrats' party colour, blue. It went on air in November last year.

It was the Sai Lor Fah talkshow that landed the Democrats in trouble recently when the commentators discussed Prime Minister Yingluck Shinawatra's Feb 8 visit to the Four Seasons Hotel.

Many members of the public and media commentators believed the content was inappropriate and unconstructive. Ms Yingluck has filed a defamation complaint against the Democrat trio.

The Media for Democracy Club, a lobby group, late last month called on the House committee on laws, justice and human rights to investigate links between the Democrat Party and the Blue Sky channel.

The group, led by Jutipong Poommul, said the Democrats' involvement with the channel could be in violation of Section 48 of the constitution.

Mr Thepthai promptly denied the allegation, saying the party had nothing to do with the Blue Sky satellite channel and did not violate Section 48 of the constitution.

As for his part in the Sai Lor Fah talk-show, Mr Thepthai said it was normal for politicians to appear on television to express their opinions.

The director of the Blue Sky channel is Thakerng Somsap. He dealt with the media together with Democrat Sathit Wongnongtoey when Mr Abhisit was the prime minister. Mr Thakerng always supervised Mr Abhisit's programme.

The channel enjoys support from PR businessman Sathon Wongnongtoey who is a younger brother of Mr Sathit and Withayen Muttamara, a close aide of Mr Sathit.

Programme hosts include Chirmsak Pinthong, who is known for his long-standing support of the Democrat Party, and Thanom Onketpol, who is close to Democrat Ong-art Klampaibul.

Although the Democrats have denied any involvement in Blue Sky, the party openly supports the channel.

Party deputy leader Korn Chatikavanich told members during a party assembly in Hat Yai late last month that Blue Sky channel "is a good satellite TV channel and is part of the party's alliance. So we would like all party members to follow the news from this channel".