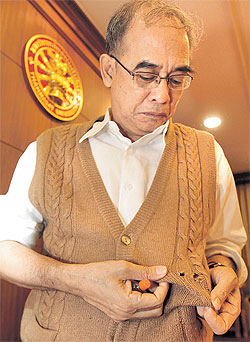 Academic Thirayuth Boonmi looks at holes in his favourite waistcoat which he usually wears when he comments on politics. THITI WANNAMONTHA

It is the first time he has commented on politics in public after keeping away from the media spotlight in the past two years to research Thai politics and recuperate from heart disease.

This has prompted the Pheu Thai Party to question his academic ethics. The party says he remained silent on political issues during the two-year Democrat-led administration.

Speaking at Thammasat University yesterday, Mr Thirayuth, now a director of Thammasat University's Sanya Dharmasakti Institute for Democracy, said for nearly 15 years political parties run by Thaksin had won general elections, and his steam had not yet run out.

The support base of grassroots people and red shirt supporters has also been expanded and mobilised to vote in the elections as well as to stage demonstrations. "Thaksin has become one of the three influential figures after 1957 who played a crucial role in changing the landscape of Thai politics," Mr Thirayuth said.

He said the other two were Field Marshal Sarit Thanarat and Privy Council President Prem Tinsulanonda, both of whom were former prime ministers.

"However, it will take a long time to prove whether Thaksin will help improve Thai politics or contribute to the collapse of the country," Mr Thirayuth said.

The academic also urged Thaksin to return to Thailand to face justice.

Thaksin fled the country to avoid serving a two-year jail term handed to him in 2008 by the Supreme Court for abusing his power as prime minister to help his then-wife Potjaman na Pombejra to buy state-owned land on Ratchadaphisek Road in Bangkok in 2003.

"Thaksin is a marketing leader rather than a democratic leader," Mr Thirayuth said.

"Thaksin wants the grassroots to be his regular customers buying his products rather than let them support the economic and political system in a sustainable manner."

He said grassroots politics forms an integral part of democracy and is a pointer to the development of free speech in Thai society.

Grassroots people began to enjoy freedom of expression after the Sept 19 coup in 2006, he said.

However, he did not consider the red shirt movement as a real political movement as it lacks ideologies to change the political structure.

He went on to say the current political crisis is deepening because those with opposing views do not accept the existence of the other side.

"While the reds say the yellows are irrational and nationalistic, the yellows said the reds are gullible and uneducated," he said.

Mr Thirayuth said that too much centralisation of power is the root cause of the the crisis.

He said the central government and the elite groups are given too much power to manage and exploit resources with only few benefits trickling down to the impoverished masses.

Grassroots people in rural areas were delighted when Thaksin initiated populist projects to help them and they were angry when Thaksin, who won their loyalty, was toppled from power in the Sept 19 coup.

Mr Thirayuth did not show up to comment on politics over the past two years during the Democrat Party-led government, but suddenly appeared when the Pheu Thai government rose to power. Pracha Prasopdee, Pheu Thai's Samut Prakan MP, questioned the benefits of Mr Thirayuth's criticism. "Why doesn't he enter politics himself if he thinks he is better than others," he said.