Sonthi will take coup secrets to the grave
Thailand
Politics

Sonthi will take coup secrets to the grave

Former coup leader Gen Sonthi Boonyaratkalin says the mystery about "someone" being behind the 2006 coup he led would not be made public even after he dies. 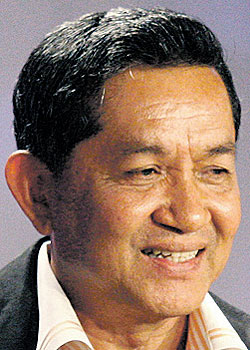 Gen Sonthi was chairman of the Council for National Security, which toppled the Thaksin Shinawatra administration on Sept 19, 2006. Today he is an MP and chairman of the House committee on national reconciliation. 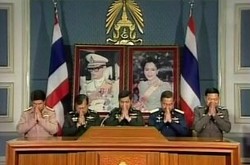 Gen Sonthi Boonyaratkalin (center), then army commander, announced the coup to the nation during a TV appearance on the evening of Sept 19, 2006.

He made his remarks in response to questions posed by Maj Gen Sanan Kachornprasart, advisory chairman of the Chartthaipattana Party, during a reconciliation study forum held by the King Prajadhipok's Institute in Bangkok yesterday.

Maj Gen Sanan said that people nationwide wondered what had really caused the coup and that national reconciliation could not happen without the truth being revealed. "Who was behind that coup? Was it you or did you have [outside] motivation? Unless the truth is spoken, Thais nationwide will remain in doubt, especially Thaksin [Shinawatra] and the red shirts who support him and still think that aristocrats and powerful people beyond the reach of the constitution backed the coup," Maj Gen Sanan said.

"After the coup, Privy Council president Prem Tinsulanonda took you to have an audience with His Majesty the King, didn't he? And was Gen Prem aware of the coup plot? Did you inform Gen Prem about the coup before you launched it?" he said.

Maj Gen Sanan said his questions were aimed at clearing up public confusion about the coup and that everyone should tell the truth if they wanted reconciliation to take place.

During his turn at the podium, Gen Sonthi refused to answer Maj Gen Sanan's questions.

"These questions should not be posed to me. I cannot answer them. Some questions cannot be answered even after death. Some matters will reveal themselves at the right time. If they are revealed today, I wonder if it will do any good," Gen Sonthi said.