Both exiled and 'inside' media have cautiously welcomed the promise of reform in Myanmar and hope that a freer atmosphere in covering the by-elections this weekend will be a measure in showing the government's sincerity about the trend to democracy in the country.

Thiha Saw, a journalist with over three decades reporting inside Myanmar, said domestic and exiled media have been doing different jobs, but still complementing each other in portraying a thorough picture of the changes in Myanmar.

Things that could not be explicitly reported inside the country could be told by the exiled media, said Mr Thiha Saw. Despite self-censorship on the ground, domestic journalists were still trying to find ways to "tell" something to their readers.

Mr Thiha Saw joined a few other journalists at the Foreign Correspondents Club of Thailand on a panel to discuss "By-Elections and Media Reform in Myanmar: the View from Inside" on Monday. 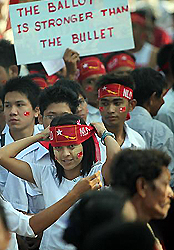 Mixed reactions still loomed large among the media circles inside the country, the panelists agreed.

Aung Zaw, founder and editor of the in-exile online , said he observed both optimism and scepticism among the media inside the country.

"We have yet to see how long and how far (the press) can enjoy the (limited) freedom. It's perhaps a longer leash, just to show to the world that Burma (Myanmar) is changing and the media there is having a certain freedom," said Mr Aung Zaw, who has made the first visit back home in 24 years.

While the Myanmar authorities were de facto wooing the exiled media to return home and do their job within the sight of Nay Pi Taw, the exiled operators were exploring and embracing the small room of openness with critical but realistic stances.

Toe Zaw Latt, Thai bureau chief of the  Democratic Voice of Burma, said his visit to Yangon last week to attend the Unesco-organised conference on media development was very emotional.

Mr Toe Zaw Latt said he was told to resettle back home, as the country was opening up with a media law being enacted and there would be no further censorship.

"But there is no legal and technical infrastructure for (media) operations, particularly the electronic media. (The media) business is expensive, and we need to have a conducive environment to operate," said the Chiang Mai-based DVB bureau chief.

Although the opening up of the country was taking place and blatant censorship has gradually been diminished, there remained at least seven laws curbing and undermining freedom of expression, Thiha Saw and Toe Zaw Latt agreed.

Mr Thiha Saw said the new context would provide both opportunities and challenges for media operators. "(With the new media law provision), more private media will emerge, but it's likely to be the investment or ownership of the military cronies as they have connections and financial resources," said the Yangon-based journalist.

Mr Toe Zaw Latt said the criteria were still unclear on who could obtain media licences, and how,  particularly regarding the electronic media.

"There's a lot to be done, as to how the media, from within and outside, could operate in the coming years with the SEA Games in 2013, Asean chairmanship in 2014, and national elections in 2015," he said.

Referring to debate in Myanmar media circles about if there could be a "ceasefire" between the media and the authorities, in a similar manner to the ceasefires arranged between some rebellious ethnic groups and the government, for the sake of a sustainable democracy and unity, Aung Zaw said he was not a political group and had no role in making a compromise.

Mr Thiha Saw said the April 1 by-elections would be a key to showing how far the government's sincerity extended. A free and fair election could be measured by how the broad an access the media would have to  the polling booths and vote counting rooms, he said.

Already, some fraud and irregularities could be seen as advance voting proceeded, and it was feared that unknown ballots were being added, he said.

In leading up to the by-elections which would see the first participation of the National League of Democracy's head Aung San Suu Kyi, the Ministry of Information and Culture has joined hands with UNESCO in discussing about the importance of new media laws, journalists’ morality and ethics, and capacity building.

Minister Kyaw Hsan told the two-day conference (March 19-20) that the new media law was intended to facilitate the proper use of press freedom for the long-term progress of Myanmar's media sector.

Information and Public Relations Department director general Ye Htut explained that a new print media law was first launched, after that gradual relaxation would be followed in order to prepare for a new media environment.

Mr Ye Htut identified challenges in lack of experience, lack of professional standards in journalism in Myanmar and limited access to local media, and need to imbue press, publishers and editors with a concept of self-responsibility.

Thailand abstained on a vote to adopt the UN resolution on the situation in Myanmar as the resolution did not take into account several essential factors, the Foreign Ministry says. spokesman.