The Royal Thai Police have bought a 24 million baht anti-riot truck from South Korea to help control unrest in accordance with international protocol. 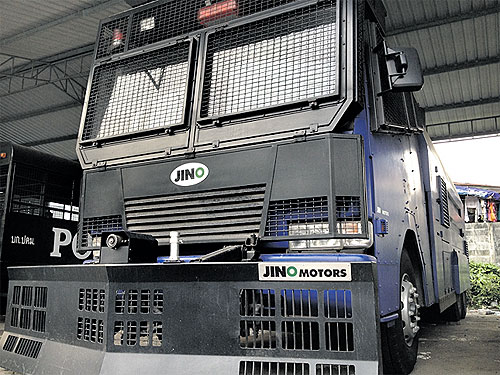 Thailand’s first anti-riot truck is parked at the Crime Suppression Division’sheadquarters waiting for its official launch next Wednesday. The 24 million baht vehicle madein South Korea has closed-circuit TV cameras and is equipped with water cannon and other anti-riot gear. WASSAYOSNGAMKHAM

The armoured vehicle, the first of its kind deployed by Thai police, is equipped with safety glass and iron bars to protect it from attack, said Pol Maj Gen Sompong Chingduang, commander of the Metropolitan Police Bureau's Protection and Crowd Control Division.

The 10-wheel vehicle, installed with closed-circuit cameras, is also equipped with water cannon. It can transport 10-12 riot police officers.

The vehicle's water tank can store tear gas, while coloured water can also be put into the tank and fired at a crowd to enable officers to identify demonstrators. The vehicle is bullet-proof.

"It will make it easier for police to handle riots. More importantly, officers will not confront demonstrators directly," said Pol Maj Gen Sompong.

He said the vehicle met international standards as its riot gear was specially designed for crowd control.

The Crowd Control Division has conducted one test with the vehicle, which will be officially launched on Wednesday.