The government's attempt to change the charter and push for a reconciliation bill has come under attack by opponents at a seminar. 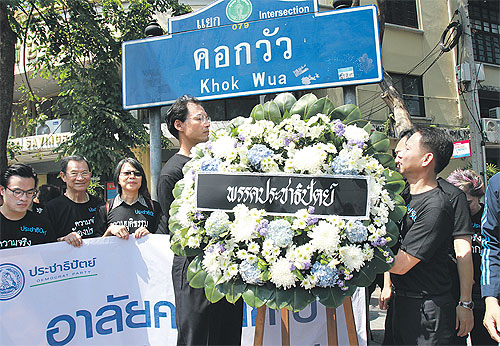 Democrat deputy leader Korn Chatikavanij, fourth left, and party members put up a wreath at Khok Wua intersection in memory of the clashes between security forces and red shirt protesters in 2010. They also observed a minute’s silence in honour of those who died. TAWATCHAI KEMGUMNERD

Senator Somchai Sawang-Karn attacked the government for trying to forget the deaths of soldiers in the red shirt protests two years ago.

Senator Rosana Tositrakul told yesterday's forum that people should not be distracted by the multi-pronged tactics deployed by the government led by Prime Minister Yingluck Shinawatra.

The administration's ultimate goal is to reduce the power of people under the present constitution, she said.

"If they succeed in amending the constitution, they would take over, monopolise and exploit Thailand," she said.

Ms Rosana claimed that "the government, with Thaksin lingering in the shadow, is eyeing energy concessions in neighbouring countries".

Boworn Yasintorn, a scholar at the October 14 Academic Institute, urged people to rally against the government if it continues to press for charter changes and reconciliation against the public's will.

"If the government still defies the public's sentiments against the enforced reconciliation and the push for rewriting a new constitution, the people must take to the streets again," Mr Boworn said.

Mr Boworn filed a case at the Constitutional Court after the Ombudsman rejected his petition to nullify the elections organised after the launch of the 2007 constitution. He says they were held owing to the Election Committee's negligence and constitutional non-compliance.

"We need to overthrow the current regime by law, not only through this means, and we also need to bring along the masses," he said.

They were speaking at a seminar to commemorate the death of Gen Romklao Tuwatham, who was killed on duty on April 10, 2010 when soldiers clashed with red shirt protesters at Khok Wua intersection and other areas on Ratchadamneon Avenue.

The late general's wife, Nicha, also took part in the seminar held at the October 14 Monument.

Romklao was promoted from colonel to general after the incident.

Ms Nicha has sought a Senate investigation into the deaths of her husband, Mr Somchai said. "It has been two years but the Romklao probe seems not to go anywhere," the senator said.

About 100 mourners, led by Chaiwat Suravichai, director of the Institute of Human and Political Development, and Dr Tul Sitthisomwong from the multi-coloured group, gathered near Din So Road in the afternoon, laying wreaths on the spot opposite Satriwitthaya School where Gen Romklao was killed. Four other soldiers also died in the April 10 clashes.

Democrat heavyweights yesterday laid wreaths at Khok Wua to mark the second anniversary of the clashes.

The Democrat delegation led by deputy leader Korn Chatikavanij was met with boos and jeers from a group of 10 red shirts observing the ceremony.

The street riots took place while the Democrat-led government was in office.

Mr Korn stressed the party's stance, which calls for the establishment of truth and facts about political violence before an amnesty should be granted.

He said uncovering the truth and accepting it were essential part of national reconciliation and the party considered it a responsibility to help the public find and establish facts.

In the evening, dozens of red shirt members also organised a separate event at Din So Road and Khok Wua.

They were commemorating the death of 20 protesters and several hundreds who were injured in the clashes.