Fugitive former prime minister Thaksin Shinawatra arrived on Saturday in Siem Reap, Cambodia, where thousands of his supporters were waiting to greet him.

He was welcomed by red-shirts from Surin province who were waiting for him at the City Angkor Hotel since the morning.

Thaksin was scheduled to take to the stage to talk to his supporters at a local stadium at 5pm. A Buddhist ceremony with 260 monks from Angkor Wat and a Songkran water-pouring ceremony for Thaksin are planned in Siem Reap on Sunday.

Thaksin supporters have been traveling to Siem Reap via road from Thailand since Wednesday. Provincial authorities have set aside a 22-hectare campsite for them about two kilometres outside of Siem Reap. 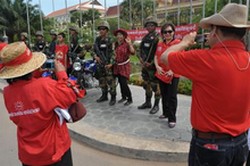 Smile and say 'reconciliation': Red-shirt tourists pose for pictures with Cambodian soldiers outside the Siem Reap hotel where Thaksin is staying.

The Phnom Penh government has said that it will foot the bill to provide crowd control and protection for the deposed Thai leader, who has strong links to Prime Minister Hun Sen.

Reports said as many as 4,500 Cambodian security personnel could be involved, with observers forecasting as many as 50,000 Thai supporters of Thaksin descending on the area near Angkor Wat.

"We have a duty to provide security for Thai people and for Thaksin," national police spokesman Kirt Chantharith told AFP.

He said there was no specific threat to anyone's safety, but noted that the red shirts had a long-standing rivalry with Thai political opponents.

"This is a huge and historical event," he said. "Many thousands of security forces will be in place."

A large number of Pheu Thai MPs have also made the pilgrimage.

Members of the United Front for Democracy against Dictatorship (UDD) from 20 northeastern provinces travelled in more than 200 buses, vans and private cars across the Chong Sangam border checkpoint, according to MCOT.

Thaksin arrived in Cambodia from Laos, where he told supporters that he hoped to be back in Thailand in time to celebrate his birthday on July 26.

"He's trying to come back this year so you can see this tour as a trial balloon," said Thitinan Pongsudhirak, a political scientist at Chulalongkorn University.

Opposition figures in Cambodia have questioned the wisdom of the government rolling out the red carpet for Thaksin and appearing to back one side in a political dispute in another country.

Kem Sokha, president of the opposition Human Rights Party, said this weekend’s gathering could harm Cambodia’s relationship with Thailand in the future.

"No one can hold power for good," he was quoted as saying by Voice of America.

"There will be a leadership change in that country. For us, as a country, we are supporting one group and confronting another group. One day, when [the second] group wins and leads the country, what will they think?"

Lao Monghay, an independent analyst, told VoA: "If a Cambodian group banned from returning to Cambodia [rallied] in Thailand, what would we think? It would be a jumbled relationship."