The sudden death of lese majeste jail convict Ampon Tangnoppakul, or Ah Kong, yesterday reignited heated criticism of the lese majeste law and the way it has been used by the authorities against suspected offenders. 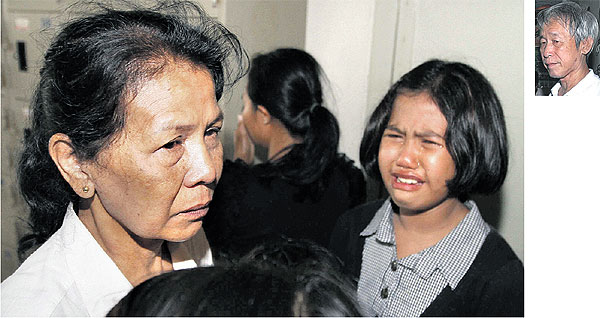 Ampon, 62, also known as "Uncle SMS", collapsed and died yesterday morning after being admitted to the Corrections Department Hospital near the Bangkok Remand Prison on Friday for vomiting and severe stomach pains.

While the cause of his death has yet to be verified by forensic experts, the news yesterday drew dozens of red shirt activists to the hospital and the Criminal Court on Ratchadapisek Road to condemn the lese majeste law.

"I am speechless. It happened so suddenly. Why did this happen to Ah Kong?" asked Rosmalin, 60, Ampon's wife.

Mrs Rosmalin and two of her daughters went to see Ampon's body after she was notified by the authorities about his death.

At the Corrections Hospital, red shirt members brought funeral wreaths, red roses and lilies to pay respect to Ampon. At the Criminal Court, they tied black ribbons on fences to protest against the verdict sentencing him to jail.

Various banners condemning the lese majeste law, or Section 112 of the Criminal Code, were also flown.

Some of those at the gathering complained of the reluctance of the Pheu Thai-led government and the United Front for Democracy against Dictatorship (UDD) leadership to help imprisoned red shirt members, especially those who have been convicted under Section 112.

They said the people who were responsible for Ah Kong's death should "rot in hell for seven generations".

"Ah Kong died too soon. This is a sad thing," Tida Thawornset, the UDD chairwoman, said.

"The people must learn of this case. What were the amataya [ruling elite] Thailand so afraid of that they wouldn't allow Ah Kong to be bailed out?

"Now that this has happened, who will take the responsibility for his death?" Among those who came to pay their respects to Ampon's family and express their anger at the situation were Payao Akkahad, mother of volunteer nurse Kamolkade who was shot dead at Wat Pathum Wanaram during the April-May political violence in 2010.

Narumon Warunrungroj, who was arrested but later acquitted of charges of firearms possession during the riots and subsequent crackdown in Bangkok, also joined the rally.

"This is a wake-up call for all regarding our justice system," she said.

"How many deaths do we need before lese majeste defendants can get the same standard of justice that is given to others?"

Chulalongkorn University's faculty of arts lecturer Suda Rangkupan said Ampon was a political victim of an injustice that stemmed from political violence.

Pranee Danwattananusorn, wife of the 72-year-old red shirt leader Surachai Danwattananusorn, who is also an imprisoned lese majeste defendant, said she is now worried about her husband's ill health after learning about Ampon's death.

Meanwhile, reactions to Ampon's death are still as polarised as during his trial last year.

On Nov 23 last year, Ampon was found guilty on four counts of violating the lese majeste law and the Computer Crime Act for sending four SMS messages deemed by the court as defamatory to the King and the Queen.

The messages were sent to Somkiat Krongwattanasuk, secretary to then prime minister Abhisit Vejjajiva, in May 2010. Ampon was sentenced to 20 years in prison.

In February this year, his lawyers appealed for bail release on the ground of his ill health.

However, the Appeal Court rejected the bail appeal, saying the charges against him were serious, that his ailments were not life-threatening and that the Corrections Department has a hospital to take care of him.

On April 2, his lawyer, Arnon Nampa, said he planned to stop the appeal process and instead ask for a royal pardon for his client.

He cited Ampon's old age and ill health as the reasons.