Ampon team of lawyers say their best 'not good enough'

Defence lawyers for the late Ampon Tangnoppakul, or Ah Kong, insist they did their best in court while admitting inexperience may have played a part in their losing the case. 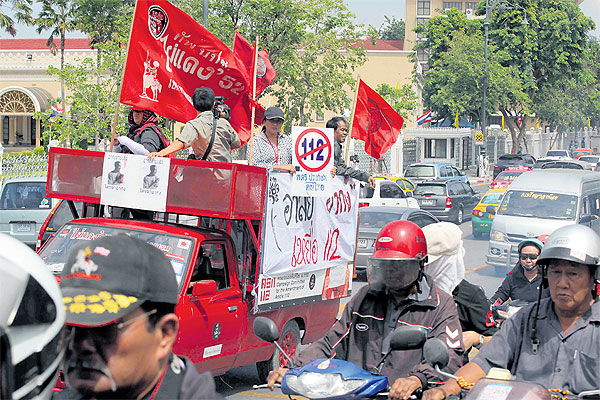 A group of red shirt United Front for Democracy Against Dictatorship followers take the body of Ampon Tangnoppakul, who died in prison after being convicted of lese majeste, to a temple in Samut Prakan. PATTANAPONG HIRUNARD

Poonsuk Poonsukcharoen, one of the four defence counsels, rejected the notion floated in online forums that they allowed Ah Kong to lose his lese majeste case in the interests of furthering the campaign to change Section 112 of the Criminal Code, the controversial lese majeste law.

"We worked with good hearts and good intentions. We did not receive any money from others. We have nothing to hide, either," said Ms Poonsuk, who graduated from the faculty of law at Thammasat University in 2006 and obtained a licence to run a legal practice a year later.

Ah Kong was sentenced to 20 years in jail for sending four defamatory text messages about Their Majesties the King and Queen.

Asked if the outcome of the case might have stemmed from the failings of the defence counsel, Ms Poonsuk conceded the inexperience of the main lawyers, herself included, might have been a factor.

But she pointed out that the defence worked as a committee with support from some friends on technical issues.

"We did thorough research on technical issues, such as the phone IMEI (International Mobile Equipment Identity), and computer-related legal issues.

"We did our best, but this case has to be seen in a larger context rather than simply questioning the lawyers' experience, or whether the judge was biased. It was a combination of various factors," she said. Ms Poonsuk herself gave testimony during the trial when a technician who was supposed to give evidence was too afraid to appear.

She presented his evidence instead, that the IMEI number inside the mobile phone that sent the defamatory messages to then prime minister Abhisit Vejjajiva's personal secretary in May 2010 could have been changed to give a false number.

Ampon, then 61, repeatedly denied sending the messages from his mobile phone, even though the state claimed they came from the IMEI that matched that of his phone.

Ah Kong said he did not even know how to send an SMS message from a mobile phone.

Ms Poonsuk said she still believed her client was innocent. But because he was quite ill throughout the trial, and was denied bail eight times, the defence lawyers, with agreement from the defendant and his family, decided to withdraw the appeal application and instead seek a royal pardon.

A week before Ah Kong was to die, the Criminal Court approved the withdrawal of the appeal, which enabled Ah Kong to seek royal clemency. However, time proved too short.

"If he had been granted bail during the court process, Ah Kong certainly would have wanted to fight on. All sides agreed on the need to find the shortest way to ensure he received the best health care.

"This is a lesson for all legal cases, not just lese majeste cases," Ms Poonsuk said.

Another defence lawyer, Anond Nampa, denied claims he was a spy working to ensure the legal team lost the case.

"Both the prosecution and the defence worked seriously on the case.

"When the verdict came out, we felt a little discouraged," Mr Anond admitted.

But he felt the Ah Kong case would make him a tougher adversary in handling future courtroom work.

"We will have to be braver in presenting our case and making challenges in court. In this case, we might have invested rather a lot emotionally on behalf of the defendant. We should have been more objective in pursuing our case.

"This is perhaps a lesson for us," he reflected.

The Human Rights Lawyers Association and human rights organisations said the death of Ampon while in custody reflected problems concerning the right to temporary release of offenders and accused in lese majeste and other criminal cases.