Police estimate more than 50,000 people will gather at Ratchaprasong intersection today to mark the second anniversary of the violent political clashes. 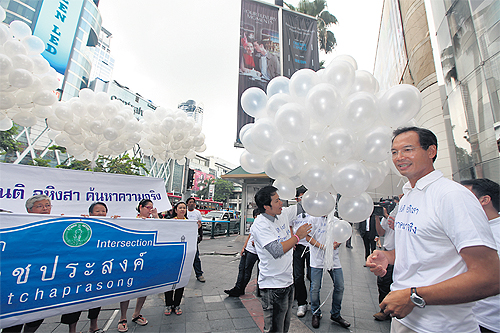 Deputy Democrat Party leader Korn Chatikavanij and other Democrat MPs for Bangkok release 500 white balloons yesterday to symbolise the end of violence and the return of peace at Ratchaprasong intersection. The event was part of the opposition party’s campaign marking the second anniversary of the political violence at the intersection. The Democrats later went to Wat Pathum Wanaram to make merit for those killed during the bloody military crackdown. SOMCHAI POOMLARD

Police are beefing up security in the area as members of the United Front for Democracy Against Dictatorship gather, Metropolitan Police Bureau deputy chief Methi Kusolsang said.

Pol Maj Gen Methi said about 1,000 police will be deployed for the gathering. Core red shirt leader Yoswarit "Jeng Dokjik" Chuklom dismissed the police estimate of 50,000 and claimed there would be at least 100,000 people. He said police have sought coordination from both red shirt leaders and vendors in a bid to ensure safety for all.

Four checkpoints will be set up to search for weapons and alcoholic drinks at Chidlom, Pratunam, Chalermpao and Ratchadamri intersections.

Police will work closely with red shirt guards in screening the crowd.

The red shirts' programme will start about 3pm and end about 2am on Sunday.

"Security deployment will start at 7am [today] while traffic police will move hours before that," Pol Maj Gen Methi said.

A spokesman from CentralWorld shopping complex - which is located at Ratchaprasong - said the mall will open as usual today.

About 500 security guards have been assigned and bomb detection equipment will be available.

Meanwhile, the Democrat Party and the multi-coloured group yesterday organised activities at two separate locations in remembrance of the violence and tragedy related to the protest.

Mr Korn said that the party's activities were to urge all parties concerned to refrain from violence and instead seek the truth.

He also called on the public not to to point the finger at any person or group for what had happened. Society as a whole should review its role and take responsibility.

"Peace will be restored when society is focused on truth and the justice system," he said.

"By assigning blame to others, we fail to avoid conflicts."

Supporters of the multi-coloured group led by Tul Sitthisomwong yesterday staged activities at King Rama VI's monument in front of Lumpini park to mark the violent incidents in the lead-up to the May crackdown.

They moved to the Silom area where they observed a minute's silence in respect for Thanyanant Taebthong who died in a grenade attack at the Sala Daeng BTS station on April 22, 2010.

The red shirts raided the hospital on the grounds that it provided shelter to security forces, forcing the evacuation of patients including the Supreme Patriarch and suspension of services.

Dr Tul said the group's activities were meant to show that the victims of violence were not limited to red shirts.

He urged authorities to speed up their investigation into the 91 deaths related to the violent protests.