Former premier Thaksin Shinawatra yesterday urged a crowd of 45,000 red shirts to set aside their anger and frustration about social and legal injustices in the name of national reconciliation. 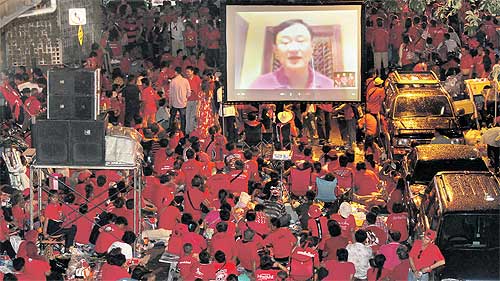 KEEP THE FAITH: Thaksin Shinawatra talks to his supporters via a video link to Ratchaprasong intersection, where about 45,000 red shirts gathered to commemorate the second anniversary of the 2010 crackdown on political protesters. PHOTO: PATIPAT JANTHONG

"The time for arguments is over," he told the crowd at Ratchaprasong intersection who had gathered to mark the bloody 2010 military crackdown that left 92 dead. "It's time to come together for peace."

His call for reconciliation came after red shirt leaders spoke throughout the day about the need to amend the constitution, seek justice for victims of the 2010 crackdown and address ongoing institutional injustices.

Thaksin, speaking via a video link, urged the red shirts to suppress their anger in the name of reconciliation, a precondition if he is ever to return to the country following his four-year self-imposed exile.

"Brothers and sisters, I understand there are pains. But we must save personal issues for later. We must think first of the whole," he said, adding that Thais must unify to support the crown, religion and democracy.

"If [the opposition Democrat Party and elites] don't want to reconcile, that's OK. I will stay abroad. But if there is reconciliation, then there's a chance for me to come back and do good things for my brothers and sisters."

Thaksin said reconciliation would depend on three points: finding the truth about the 2010 clashes, compensation for the victims and a new attitude of "thinking new, doing new" by Thais.

"We need a new constitution that is truly democratic," he said to rapturous applause. "I have a doctorate. I have studied the justice system. I have never known such injustice."

Thaksin pointed to last week's decision by the Constitution Court to disqualify red shirt leader Jatuporn Prompan as a party list MP for the ruling Pheu Thai Party as one example.

Mr Jatuporn was disqualified in a 7-1 ruling for failing to vote in last year's general election. During the election, he was in detention by the military on terrorism charges related to the 2010 protests.

Thaksin's speech contrasted with more combative speeches given by leaders of the United Front for Democracy against Dictatorship (UDD) earlier in the day.

"Murderers must be brought to justice," said UDD spokesman Worawut Wichaidit. "I saw with my own eyes soldiers killing the people. If they don't believe me, they can call me a liar."

Mr Worawut slammed the opposition Democrats for their efforts to discredit Thaksin's sister, Prime Minister Yingluck Shinawatra, and urged the red shirts to continue to fight for change.

Waipoj Apornrat, another UDD leader, said constitutional change was needed to hamstring the ammart, or ruling elite. "Now we have red villages. Next, we will have red districts and red provinces. More and more and more," he said.

UDD leader Suporn Attawong said those responsible for the 2010 crackdown must be brought to justice.

Robert Amsterdam, a Canadian lawyer advising the UDD, said justice remained fleeting in Thailand. "We will expose the face of the ammart to the world. We will tell the world about the [injustice] to Jatuporn," he told the crowd.

Red shirt supporters streamed into Ratchaprasong intersection from the early hours of the morning, coming by the bus load from provinces such as Mukdahan, Songkhla and Chiang Mai.

Leaders called for a minute of candle-lit silence in the evening in memory of those who lost their lives during the crackdown, which followed a nine-week protest against the Abhisit Vejjajiva government that sharply split Thailand across ideological, class and political grounds.

At 2pm, 19 monks chanted Buddhist prayers in memory of those killed or injured during the 2010 clashes.

The rally passed peacefully. Hawkers could be found throughout the crowd pitching red shirts, banners and flags featuring pictures of Thaksin and Ms Yingluck.

"It's like a reunion, meeting up with friends we met since we joined the movement two years ago. Now we have our own government, but we still have to show our presence," she said.

Mrs Bualong urged the Pheu Thai government to increase its focus on the rural and urban poor.

"There needs to be more project funding, not only for rural areas but for the urban poor as well," she said.

Wassana Mabut, the mother of Pattama Moolmil, the only female political prisoner held at Lak Si temporary prison, said families of political prisoners from Ubon Ratchathani were at the rally to show their support for the red shirt fight for democracy and justice.

"Pattama still has a strong will and she asks those outside to fight on," she said. Four residents from Ubon Ratchathani have been sentenced to 33 years in prison for arson against provincial halls on May 19, 2010.

Other activists called for judicial reforms, including the right to bail for political prisoners and those held on lese majeste charges. Relatives of red shirts injured during the conflict also called for faster compensation payments.