The Constitution Court has ordered parliament to suspend its vetting of the charter amendment bill, pending a review of its constitutionality. 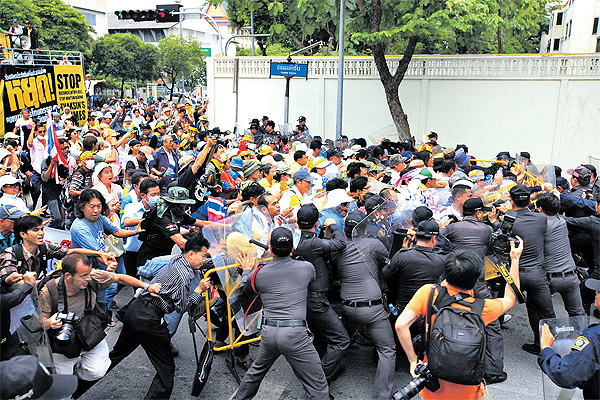 Police attempt to hold back People’s Alliance for Democracy demonstrators at the Karn Ruean intersection as they try to force their way through to block a route to parliament on Friday. The blockade has forced an indefinite adjournment of House meetings. KITJA APICHONROJAREK

A hearing is scheduled for July 5 and 6 and a ruling can be expected if the evidence is complete.

The bill was initially slated for the third and final reading this coming Tuesday. Five individuals and other groups of people, however, have filed petitions with the Constitution Court. They want the judges to rule whether the bill, which would essentially cancel the 2007 charter, amounts to an act to abolish the democratic regime of the constitutional monarchy.

Pimol Thampitakpong, a court spokesman, admitted that the escalating political tension had forced the Constitution Court to take swift action.

"There are as many as five petitions seeking a review on the very same issue. Normally, the court would spend some time to consider if it would take the case. For this particular issue, however, we believe that if we leave it for too long, the situation could become more volatile," Mr Pimol said.

The court bundled the five petitions into one for ease of consideration.

Mr Pimol said the petitioners filed the complaints under Section 68 of the charter. The clause allows those who are aware of an attempt to overthrow the constitutional monarchy to grab power in unconstitutional ways to either ask the attorney-general to investigate the matter or petition the Constitution Court to stop the act.

He said that charter court judges spent a significant amount of time before reaching a decision to take up the petition. They were particularly concerned that their agreement to consider the complaint could lead to further abuse of Section 68.

"Section 68 gives the court the power to prevent, not rectify [an attempt to overthrow the constitutional monarchy.] After all, if there is such an attempt, the court would not be able to correct it in time. The court's task thus is to see if the bill is constitutional and if it can carry on," he said.

Mr Pimol noted that even if the charter court decided that the bill complies with the constitution and is allowed to proceed, it can take further action against it if unconstitutional details turn up later at the section level.

The cabinet, parliament, the Pheu Thai Party, the Chartthaipattana Party, Sunai Jullapongsathon and Paradorn Prissanananthakul, who sponsored the charter rewrite drafts, have been told to clarify the matter in writing within 15 days.

Mr Pimol said there were no punitive measures if parliament ignores the suspension order and proceeds with the third reading.

"But it may reflect an intent as claimed in the petitions," he said.

He said that although the five complaints were against the acts of political parties, they would not lead to their dissolution.

Pheu Thai MP Samart Kaewmeechai, chairman of an ad hoc committee vetting the charter amendment bill, said the third reading would be put off. Other issues could be moved up for the joint House and Senate deliberation instead, he said.

The charter amendment bill passed the second reading with 340 votes of support against 101 opposed after a month of tense debate.