The future of the government's contentious reconciliation bills and constitutional amendments is unclear following a decision to postpone House sittings indefinitely. 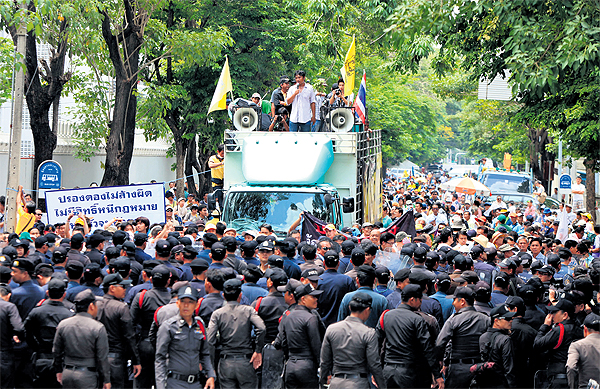 PAD protesters confront police on Phichai  Road as they try to block Pheu Thai MPs  from entering parliament on Friday. The  protesters managed to push their way past  the police barrier only to learn the session had been postponed. KITJA  APICHONROJAREK

The People's Alliance for Democracy declared victory after its yellow-shirted members foiled attempts to hold a House meeting to debate the reconciliation bills on Friday.

On Saturday PAD leaders called off rallies planned for the coming week but warned they would return the moment lawmakers attempted to revive any legislation they oppose.

A PAD protester wears a long earring with dangling miniature hand-clappers, a symbol of the movement. PATIPAT JANTHONG

House Speaker Somsak Kiatsuranont ordered officials on Saturday to send text messages to MPs and senators informing them there would be no sittings next week.

MPs and Senators had been scheduled to hold a joint sitting on Tuesday to consider the draft charter amendment. MPs were to debate the four reconciliation bills on Wednesday and Thursday.

The cancellation of the planned joint sitting came after the Constitution Court on Friday ordered parliament to suspend its vetting of the charter amendment bill, pending a judicial review of its constitutionality.

The PAD opposes the reconciliation bills, which it sees as an attempt to whitewash the deeds of ousted former premier Thaksin Shinawatra so that he can return to Thailand.

While it plans no rallies for the foreseeable future, the PAD said protesters would remain on alert.

It issued a statement on Saturday calling on the yellow-shirts and "people who love the nation" to get ready to return to the streets immediately after receiving a signal from PAD co-leaders.

Tul Sitthisomwong, coordinator of the so-called multicolour group, which shares many of the PAD's views, said his group would also stand down unless the reconciliation bills were revived.

On Friday, PAD demonstrators and protesters from the multi-coloured group sealed off all routes leading to parliament, blocking MPs from getting to the House.

The number of protesters grew to about 5,000 in the afternoon. Tensions erupted when protesters blocked Sukhothai Road to prevent MPs from getting into parliament.

Police formed a line to stop the yellow shirts from moving closer to the parliament's entrance gates to block arriving MPs. The protesters, however, allowed a few Democrat MPs to get inside.

Democrat Party deputy leader Jurin Laksanavisit urged the government to withdraw the bills from parliament. The bills would only deepen divisions in society rather than create unity, he said.

Jatuporn Prompan, a co-leader of the red-shirted United Front for Democracy Against Dictatorship co-leader, on Friday accused the PAD and the Democrats of trying to incite violence to pave the way for another coup to topple the Pheu Thai-led government. 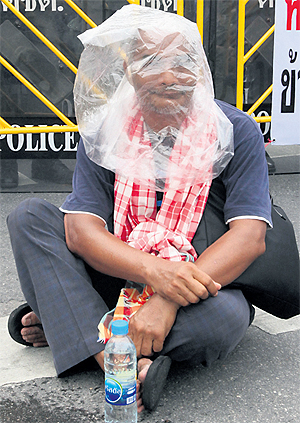 A demonstrator covers his head with a plastic bag as he sits on the road at Karn Ruan intersection. APICHIT JINAKUL 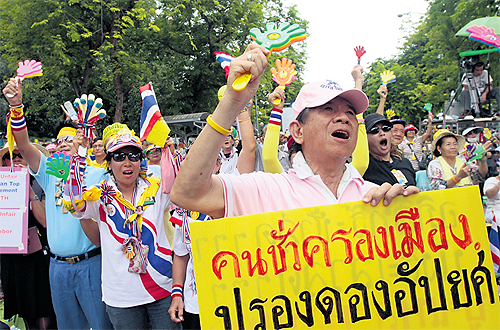 Yellow shirts erupt in joy when learning the planned House deliberation of the bills has been put off. PATIPAT JANTHONG 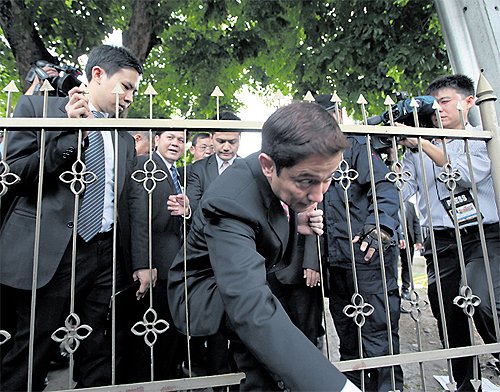 Information and Communication Technology Minister Anudith Nakornthap slips through an opening in the fence to avoid confronting People’s Alliance for Democracy demonstrators as he and other Pheu Thai Party MPs leave parliament. The yellow shirts had blocked the route leading to the main gate of parliament. APICHART JINAKUL 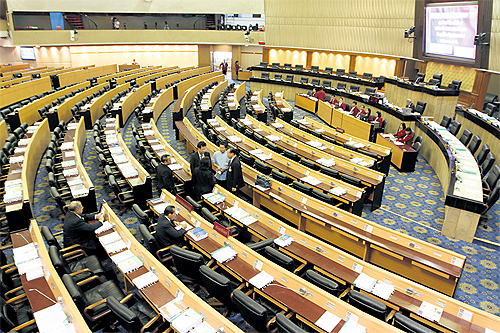 Some Democrat Party MPs and parliament officials slipped past yellow shirts blocking parliament’s entrance into the chamber, but only 58 MPs registered for the House meeting on Friday. PATTANAPONG HIRUNARD 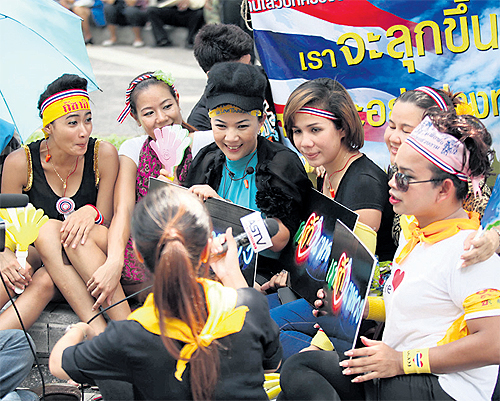 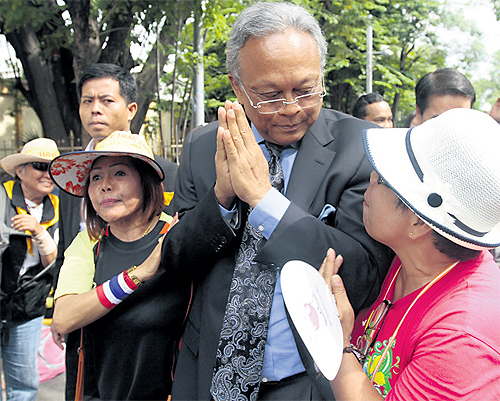 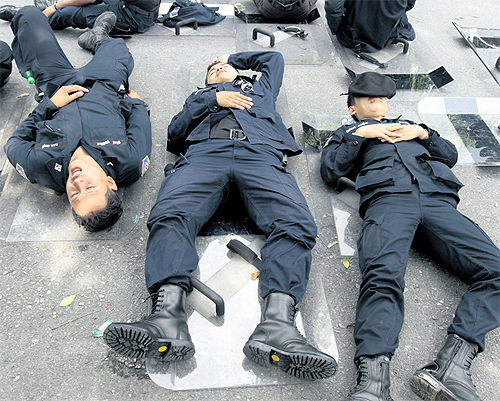 Riot police in full uniform and gear take a nap as they wait to change shift outside parliament. PATIPAT JANTHONG