State prosecutors have decided against submitting petitions against the government's charter amendment bill to the Constitution Court. 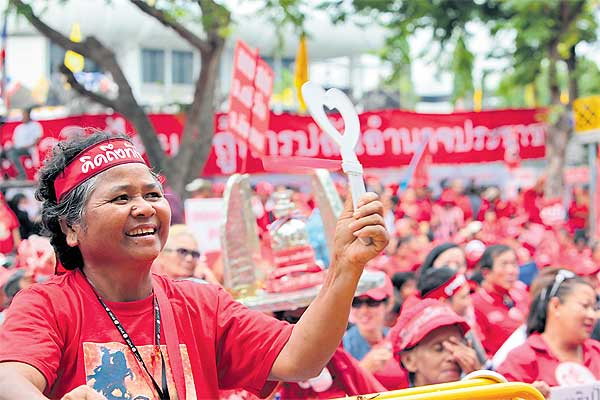 Reds round on judges

A red shirt wearing a headband reading ‘‘Missing Thaksin’’ holds a heart-shaped clapper while cheering at a gathering of the United Front for Democracy against Dictatorship outside parliament yesterday. The red shirts collected 20,000 signatures seeking to impeach the Constitution Court judges who ruled to suspend the final reading of the reconciliation bills in parliament. APICHART JINAKUL

The decision creates the possibility of conflict between the attorney-general and the Constitution Court, adding a new dimension to what is fast becoming a showdown between the legislative and judicial branches of government.

Opponents of the court's decision argue that the constitution prohibits such petitions from being submitted directly to the court, and must go through the Office of the Attorney-General (OAG) first.

OAG spokesman Winai Damrongmongkolkul said a meeting of state prosecutors concluded the ongoing charter rewrite process is a legitimate exercise of power by the legislative branch.

Mr Winai said state prosecutors agreed that all of the three charter amendment bills _ proposed by the government and its supporters _ have no provisions attempting to overthrow the democratic regime of government with the King as head of state, nor are they trying to acquire power to rule the country by unconstitutional means.

Mr Winai said state prosecutors concluded there was no need to submit petitions against the bills to the court.

He said the OAG was performing its duty and its judgement did not infringe on the authority of the charter court.

The OAG has full legal authority under Section 68 of the constitution to investigate petitions before submitting them to the court, Mr Winai said.

The anti-charter amendment petitions were submitted to both the OAG and the Constitution Court by Democrat MP Virat Kalayasiri, Senator Somjet Boonthanom and others.

The petitioners argue that the charter amendment bills may lead to the overthrow of the constitutional monarchy.

On Wednesday, the Constitution Court explained the reasons for accepting the petitions, citing Section 68 of the constitution which outlines measures to be taken against actions to overthrow the monarchy, as well as Sections 69 and 70 which outline its right to prevent such actions.

PM's Office Minister Woravat Au-apinyakul yesterday said the government was not insisting on pushing for the passage of its charter rewrite bill during the current session.

The government only wanted eight key pieces of legislation, particularly an anti-money laundering bill, to pass parliament during this session, he said.

He also confirmed that deliberation of the four reconciliation bills will be delayed until the next session.

Parliament President Somsak Kiatsuranont has put the Constitution Court's order to suspend parliament's third reading of the charter bill while it reviews the petitions on the agenda.

But Mr Korkaew, a co-leader of the United Front for Democracy against Dictatorship, said that the ruling party would not sneak in a motion to ask parliament to go ahead with the third reading of its charter change bill and vote on it during today's meeting.

In the event the meeting has differing views on the court's injunction, the parliament president will ask MPs to vote on how best to proceed, he said.

If the meeting agrees that the third reading of the charter bill should go ahead, the parliament president will then fix a date for a vote, he added.

He corroborated Mr Korkaew's pledge, saying deliberation of the bill would not be on today's agenda.

He also said the meetings on June 13-14 will not debate the four reconciliation bills.

However, a Pheu Thai source said a meeting of the party's core leaders decided to propose an urgent motion at today's joint session to go ahead with the third reading of the charter rewrite bill.

Pheu Thai will use its House majority to accept the motion, the source said.

Democrat Party list MP Boonyod Sooktinthai said Democrats will walk out of the chamber if today's meeting votes to go ahead with the third reading of the charter bill.

Mr Boonyod said there was no guarantee that the chaotic scenes that marked sessions last week would not recur during today's meeting.

Girls were excluded from returning to secondary school in Afghanistan on Saturday, after the country’s new Taliban rulers ordered only boys and male teachers back to the classroom.