The opposition Democrat Party is gathering support outside of parliament to aid its fight against the constitutional amendment and reconciliation bills. 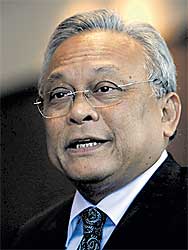 Why are the Democrats forming a movement outside of parliament when you have always adhered to the parliamentary system?

We oppose this because all parties should participate in politics. People and institutions should be able to hold the government accountable and keep it in check. There must be checks and balances.

Meanwhile, former Communist Party members are moving to turn Thailand into a republic run by a single political party. This may go along with Thaksin's intention. Both have joined forces and are threatening the Thai people and Thailand.

Do you admit that you cannot carry on the fight in parliament?

What drives your party to campaign outside of parliament?

We see two dangers that threaten the nation. One is that they will draft a new constitution. We think they want the prime minister to have absolute power and control the executive, the legislature and the judiciary. Lack of control over the judiciary is their weak point because what they have done is against the law and the judiciary can take action against them.

In some drafts, they empower parliament to approve the appointment of the Supreme Court president. Independent institutions will surely be restructured. This will deprive people of institutions providing checks and balances. There will be nothing to protect people's rights.

The other thing that drives us to move outside of parliament is "reconciliation" bills which are in fact intended to whitewash the wrongdoings of Thaksin and his associates. This will undermine the rule of law and severely damage the nation's legal system.

The Democrat Party must go to the people of this country to tell them of the truth. Many are unaware of what is going on. We are setting up stages to tell them and urge them to fight.

What is the ultimate goal of your movement?

We do not want to overthrow the government. We will not mind if Pheu Thai wins another election and Ms Yingluck Shinawatra stays as prime minister for a new term. If the government, Pheu Thai and the red shirt network stop pushing for the "reconciliation bills" and trying to change the constitution to restructure the administrative system, we will stop our movement.