Labourers urged to get political

Activists have urged labourers across the nation to pay more attention to politics to empower themselves with knowledge if their MPs don't respond to their demands. 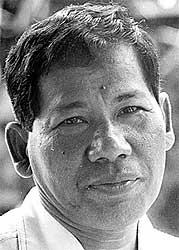 The activists yesterday held a seminar entitled "The Political Role of Thai Labourers" to mark the 21st anniversary of the disappearance of former National Congress of Thailand Labour president Thanong Po-arn.

He played an important role in negotiating with the Chatichai government to secure the creation of a comprehensive national social security system.

The seminar was attended by about a hundred labour activists and workers.

State Enterprises Workers' Relations Confederation secretary-general Savit Kaew-wann told the audience that labourers can not ignore politics. They should pay more attention to political issues to empower them to develop better lives for themselves, he said.

"We should help raise awareness for the labourers to understand politics," Mr Savit said.

The labour sector has about 38 million people, but none of them have political power, he said.

Pornma Poomphan, president of the Berla Industry Labour Union, said labourers can make their lives better if they show more interest in politics.

"A case in point is the increase in the daily minimum wage to 300 baht, which as of now still cannot be implemented across the country."

He said labourers should unite to demand a change in labour policies.

Yongyuth Mentapao, the chairman of the Thailand Motor Relation Confederation, yesterday floated an idea for labourers to help set up their own political party which might have to seek funds from capitalists.

Mr Yongyuth said it might take some time to drive the message home to the labour force.

Mr Chinnachote said many labour representatives, including himself, failed to win parliament seats in the election last year despite the fact they were well-known among the labour force.

What they have demanded in the past has led to change, such as pushing for labour and social security laws.