The red-shirt United Front for Democracy against Dictatorship (UDD) is nearing 100,000 signatures on its petition seeking the removal of Constitution Court judges who ordered the suspension of the charter amendment bill deliberation. 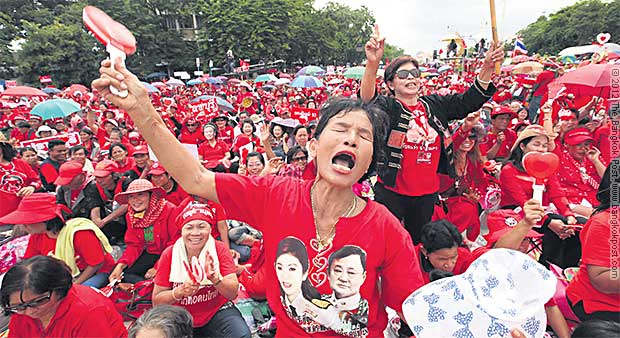 Red shirt supporters gather at the United Front for Democracy against Dictatorship rally at the Democracy Monument on Ratchadamnoen Avenue yesterday. The rally coincided with the 80th anniversary of the country’s switch from a system of absolute monarchy to constitutional monarchy. PAWAT LAPAISARNTAKSIN

Speaking during a red-shirt rally at the Democracy Monument on Ratchadamnoen Avenue Sunday, UDD chairwoman Tida Tawornseth said almost 100,000 people had signed the petition _ double the amount needed to launch impeachment proceedings against seven of the nine judges who voted for an injunction suspending parliamentary debate on the charter amendment bill.

By the time the rally ended late last night, the UDD will have gathered 100,000 signatures, Ms Tida predicted. She said UDD co-leaders would consider when to submit the petition to the Senate.

Sunday's red-shirt rally marked the 80th anniversary of the 1932 revolution which brought an end to Thailand's absolute monarchy, ushering in a constitutional monarchy.

Thousands of red shirts participated in the rally, with roads around the area closed. The rally's theme was "80 Years Without Democracy".

Ms Tida told the crowd that the rally was symbolic of Thailand's path to democracy and a show of strength for people who are calling for full democracy.

She said the red shirts must encourage the people to take the baton from the Khanarassadorn, who staged the bloodless coup on June 24, 1932, that changed Thailand's administrative system to a constitutional monarchy.

The red shirts will carry on with the campaign until true democracy is achieved, Ms Tida said.

Mr Jatuporn said ousted prime minister Thaksin Shinawatra was travelling and would not phone in to address supporters during the Sunday rally.

He also said he would visit the Constitution Court today to demand an explanation as to why it had asked the Criminal Court to revoke his bail on terrorism charges. Mr Jatuporn insisted he had not violated the terms of the bail.

Mr Jatuporn secured bail after being charged with terrorism in connection with the 2010 red-shirt protests.

He faces the prospect of having his bail cancelled after speaking at a June 7 red shirt gathering outside parliament. The speech was deemed by the Office of the Constitution Court to be offensive to its judges.

Mr Jatuporn allegedly assailed the Constitution Court over its ruling to suspend the charter amendment bill.

Mr Jatuporn said the court had no authority to seek the bail cancellation because that should be the job of prosecutors. He said he planned to sue the court judges for taking the action.

But Constitution Court president Wasan Soypisudh said the judges had not initiated the request. He said it was filed with the Criminal Court by the Office of the Constitution Court, which acted of its own accord.

Former world number one Carolina Marin breezed into the final of the Thailand Open badminton tournament on Saturday, beating South Korea’s An Se-young 21-19, 21-15.