National Innovation Agency director Supachai Lorlowhakarn has said he will leave his post if the Administrative Court rules that he plagiarised his thesis or if the agency's board orders him to resign. 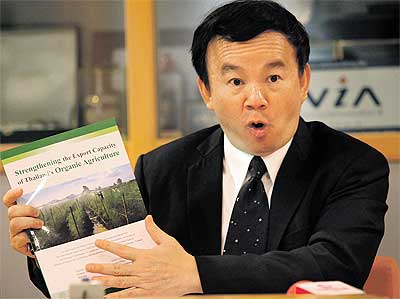 National Innovation Agency director Supachai Lorlowhakarn defends himself after Chulalongkorn University withdrew the PhD in agricultural technology it awarded to him in 2008. TAWATCHAI KEMGUMNERD

Chulalongkorn University has withdrawn the PhD in agricultural technology the university awarded to him in 2008, after its council concluded last Thursday that Mr Supachai had plagiarised 80% of his dissertation.

Mr Supachai said the council claimed he copied parts of his thesis from four books.

He insists one of them _ Strengthening the Export Capacity of Thailand's Organic Agriculture _ was his own work.

He claims he gained approval from the NIA to use it as a reference in his thesis.

Previously, British agricultural consultant Wyn Ellis claimed he was the principal author of the book.

Another book was the product of a joint effort between the NIA and a private company. Mr Supachai said he did not know about the two other books the council claimed he copied.

Mr Supachai said the two books he is aware of are the product of NIA work, "so the only one who can file a complaint against me is the NIA".

NIA board chairman Pornchai Rujiprapa, also permanent secretary of the Science and Technology Ministry, said the withdrawal of the doctoral degree was a personal matter as Mr Supachai did not use his PhD to apply for the director's position.

He admitted that it affects Mr Supachai's credibility.

Mr Supachai has served as director of the NIA since 2004. The NIA's objective is to support the development of innovation in Thai industries _ which also involves issues related to intellectual property rights.

Mr Supachai said he will file a complaint against Chulalongkorn University and its council with the Administrative Court. He expects a ruling to be delivered within two to three months.

"I admit the [PhD] withdrawal has a significant effect and if there are any problems I am ready to resign," Mr Supachai said. "If the court rules that I am wrong, I will resign. But if not, I dare them [university executives] to resign themselves," he added. He also questioned why the university took only 12 days to conduct its investigation.

Mr Supachai said the NIA is not a place for creating new knowledge, but where existing knowledge is transformed by new innovations.

Mr Supachai said a new committee, comprising academics in the field of organic agriculture, should be set up to determine whether his dissertation created new knowledge.