Restrictions will be eased on traffic flow during royal motorcades in response to His Majesty the King's wish to help alleviate traffic congestion. 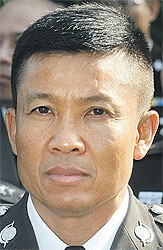 Anand: Traffic to be eased

The Royal Thai Police office will produce 25,000 handbooks with guidelines for traffic policemen to implement when providing security for the motorcades.

The handbooks will be distributed to traffic police so they understand the proper procedures for directing traffic when motorcades pass areas under their jurisdictions.

His Majesty the King last year instructed the Office of the Principal Private Secretary to work with state agencies on ways to help alleviate traffic problems caused by the royal motorcades.

Pol Maj Gen Anand Srihiran, Deputy Commissioner of the Metropolitan Police Bureau, who is in charge of special affairs, said a committee had devised guidelines for traffic police to follow.

While security for the royal motorcades will remain strict on official trips, traffic management rules will be eased for private journeys.

For example, on two-way roads, vehicles travelling in the opposite direction to the motorcades will be allowed to proceed.

At the moment, traffic on both sides is stopped well in advance.

Push-carts which are currently required to move away from main roads will instead be allowed to stay at the roadside as the royal motorcades pass by.

Motorists will also be allowed to use U-turn bridges while the royal motorcades pass.

The period in which traffic is halted prior to the arrival of the royal motorcades will also be reduced to minimise the impact on the public.

In addition, people will be able to use escalators on the opposite side of the road to where motorcades pass.

Royal Aide-De-Camp Department officials, who normally travel with the royal motorcades, will inform the police whether traffic police are performing their duties in line with the guidelines in the handbook.

The new arrangement will be assessed as to whether it is practical and if it reduces traffic wait times, Pol Maj Gen Anand said.

The handbook will contain pictures and explain the procedures for the police to follow.

The guidelines will be enforced both in Bangkok and upcountry, he said.

The publication of the handbooks should be completed later this month, he said.