If the Constitution Court rules that the charter amendment bill is aimd at toppling the democratic administration and constitutional monarchy, the red-shirts will come out in force and take decisive action, Pheu Thai list-MP and United Front for Democracy against Dictatorship co-leader Korkaew Pikulthong said on Wednesday.

Mr Korkaew said the people who have fought for democracy and supported the Yingluck Shinawatra government would definitely not accept such a ruling. 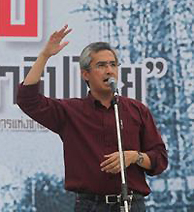 "They will take action to get the court (judges) arrested.  If police refuse to do that, the people will take the law into their own hands," he said.

"The ammart [aristocratic elite] would likely mobilise their supporters to come out to protect the judges.  When two conflicting groups of people clash, the military would then come out to seize power.  The red-shirts would fight tooth and nail against the soldiers.  There would eventually be considerable losses.

"I am not just making a threat. The red-shirts exist in large numbers, some of them may well think the tactic of staging protests adopted by core members takes too long to achieve victory.  So they may resort to violence," he said.

Deputy Prime Minister Yutthasak Sasiprapa, who is in charge of security affairs, said the Royal Thai Police Office had been instructed to maintain law and order on Friday, when the Constitution Court will deliver its verdict on the constitutionality of the charter amendment bill under Article 68.

Police are to prevent protesting groups from clashing and watch for possible interference by a third party, both before and after the court's verdict.

However, the authorities have no plan to use a special law to control the protesters, he said.

Gen Yutthasak said a plan has been drawn up to protect and evacuate the Constitution Court judges if necessary, but not to the extent that a helicopter will be used.

The Royal Thai Armed Forces Command would be asked to help if the police cannot control the situation or in the case an emergency evacuation is needed, he added.

China and UK clash over fate of Hong Kongers

HONG KONG: China promised Thursday to take countermeasures against Britain if it presses ahead with plans to extend citizenship rights to Hong Kongers after Beijing imposed a sweeping security law on the restless financial hub.

BEIJING: Chinese tech giant Tencent has been fooled by impostors posing as representatives of the country's most famous chilli sauce brand, police said, in a saga that nearly pitched the two famous brands against each other in court.