Security has been beefed up at the Constitution Court amid fears the red shirts will come out in force and try to capture the judges if they view tomorrow's verdict as very negative. 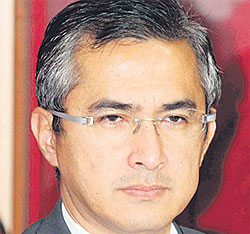 "They will file treason charges against the judges. If police refuse to arrest them, the people will do it themselves." -  KORKAEW PIKULTHONG, PHEU THAI LIST-MP

Pheu Thai list-MP and United Front for Democracy against Dictatorship (UDD) co-leader Korkaew Pikulthong said Wednesday the red shirts would definitely refuse to accept the verdict if the court ruled that the charter amendment bill aims to overthrow the constitutional monarchy and seize power by unlawful means.

He said the people who fought for democracy, and the Yingluck Shinawatra government and its supporters, would not accept such a ruling.

"They will file treason charges against the judges. If police refuse to arrest them, the people will do it themselves," Mr Korkaew said. "Then the ammart [elite] will likely mobilise supporters to come out to protect the judges.

"When two conflicting groups of people clash, the military would then come out to seize power. The red shirts will fight tooth and nail against the soldiers and then civil war will take place," he said.

Still, Mr Korkaew urged red shirts not to show up at the court tomorrow but to stay at home and wait for a signal from UDD leaders.

"Once you hear a whistle blow, pack your bags and bid farewell to your family. Then, it will be a decisive fight for us," he said.

Deputy Prime Minister Yutthasak Sasiprapa, who is in charge of security affairs, said the Royal Thai Police Office had been instructed to maintain law and order tomorrow, when the Constitution Court will deliver its verdict on the constitutionality of the charter amendment bill, under Section 68.

Deputy Prime Minister Yutthasak Sasiprapa said he hoped the situation would not get "out of hand", but that the military were prepared to step in if needed.)

Police are to prevent protesting groups from clashing and watch for possible interference by a third party, both before and after the court verdict.

However, he added that authorities have no plan to use special laws to control the protesters.

Gen Yutthasak said a plan has been drawn up to protect and evacuate the Constitution Court judges if necessary, but not to the extent that a helicopter would be used.

The Royal Thai Armed Forces Command will be asked to help if the police cannot control the situation, or in case an emergency evacuation is needed, he said.

"It isn't right. That would mean that we have no respect for the rule of law and the separation of powers," Mr Abhisit said.

He said it was impossible that the ruling would be favourable to all sides.

He urged Prime Minister Yingluck to exercise leadership and pledge that the government would respect the court's ruling.

He expressed confidence that the judges would not be intimidated by the red shirts.

Ukrit Mongkolnavin, chairman of the National Independent Rule of Law Commission, said the verdict would not lead to violence or divisiveness.

"The judges also care for the country. If we know that enforcement of the law will lead to a commotion and still press ahead, we are betraying our profession and country," he said.

Meanwhile, yellow-shirt co-leader Chamlong Srimuang yesterday asked the Constitution Court not to hand down a ruling until an inquiry into his case is completed.

It has ordered the 416 lawmakers and cabinet ministers who voted in support of charter amendment drafts to submit their statements to justify their decision within 15 days.

In his letter to the charter court, Maj Gen Chamlong said that a verdict should be postponed until he testifies.

He said his petition and five other complaints deal with the same charge _ the legality of the charter amendment. A verdict, if announced, could damage his case.

"It would be unfair to the case [if the verdict is handed down tomorrow]. It would forsake the rights of the complainant and those who disagree with the amendment," he said.