The Constitution Court on Friday dismissed the petitions filed against the government's charter amendment bill, which claimed it was unconstitutional and an attempt to overthrow the constitutional monarchy and democratic administration.

Seven of the judges on the court bench agreed the plaintiffs had not provided the proof needed to support their contention. There was one dissenting opinion. The ninth judge was earlier excused from the case.

The court also ruled that if the constitution is to be rewritten in its entirety there should be a public referendum because the 2007 Constitution was endorsed by referendum. Alternatively, sections of it can be amended.

Today's ruling by the Constitution Court was in response to petitions filed by five groups of people, who said the charter amendment bill ,which seeks to amend Section 291 to make way for the setting up of a constitution drafting committee to write a new constitution, might contravene Section 68, which is designed to protect the constitution from being amended in a way to overthrow the country's democratic administration and constitutional monarchy. 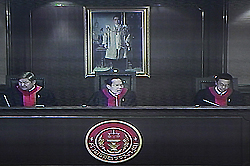 The Constitution Court judges announce the ruling on the charter amendment case. (Photo by Thiti Wannamontha)

On receiving the petitions, the court ordered parliament to delay the vote on the third reading of the charter amendment bill, pending its verdict.

Proponents of the bill argued that the court did not have the power to accept the petitions for consideration in the first place, saying that they must be first submitted to the Office of the Attorney General for consideration.

The court started reading its decision today at 2.45pm.

The court ruled it is within its jurisdiction to accept the petitions,  because it is Section 68's intention that petitioners also file their case with the Constitution Court to protect the constitution.

On the proposed amendment of Section 291 to set up an assembly to rewrite the entire constitution, the court ruled that this cannot be done, because the 2007 constitution received the people's endorsement through a public referendum.

Therefore, a public referendum is required to decide whether the constitution should be amended in the entirety.

The court suggested the charter be amended by sections.

On the argument whether the charter amendment bill could be seen as intended to abolish the country's democratic administration and the constitutional monarchy, the court ruled that the proposed amendment to Section 291 to set up a constitution drafting assembly cannot be taken as having such an intention.

The petitioners merely raised fears out of concerns for the monarchy, the court said.

Therefore, there as no reason to further consider whether the proposed change would lead to the dissolution of the political parties which supported the bill, the court said.

The court also dismissed a petition submitted by yellow-shirt People's Alliance for Democracy core member Chamlong Srimuang that it delay the verdict.

Hundreds of police surrounded the court building in the hours leading up to the decision, amid concern that a ruling against Prime Minister Yingluck Shinawatra's Pheu Thai Party could rip open the kingdom's bitter political divisions.

Red-shirt supporters had gathered at many different spots around the city, including the Pheu Thai Party head office and the UDD office at Imperial Lat Phrao department store, broke out in cheers of delight on hearing the verdict.

Senior Democrat members watched the live broadcast of the verdict from the party headquarters, where the atmosphere was quiet.